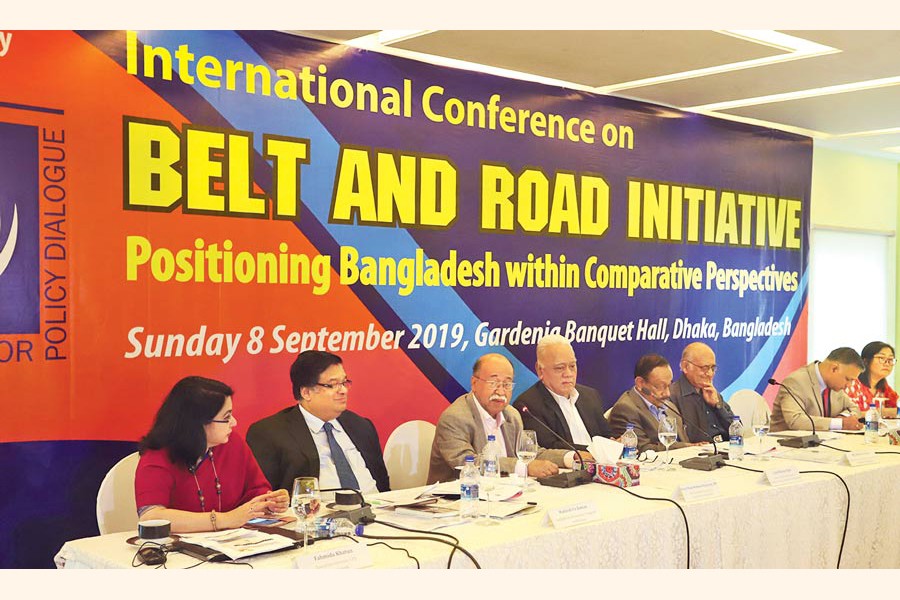 The Belt and Road Initiative (BRI) is an opportunity for Bangladesh as the country needs a huge sum of money to investment in infrastructure, a leading development economist of the country said on Sunday.

"By 2030, Bangladesh requires US$ 928.48 billion in additional investment or $ 67 billion annually … where this will come from," said Professor Mustafizur Rahman, distinguished fellow of the Centre for Policy Dialogue (CPD).

"BRI is an opportunity for us," he told a session on 'Economics of BRI" of a day-long international conference on BRI. He chaired the session.

Mr. Rahman said that prioritisation and good governance in the infrastructure projects under BRI should be looked at sincerely.

"Whether a project will be a debt trap or it will give us benefit depends on how we select the projects," he said, adding that preparedness and homework is important in selecting the projects.

"Nobody is forcing us to select projects. We should have the autonomy to select, prioritise and implement the projects," he added. "If we do not do our homework, we will be blaming everyone."

He said: "It is one world, according to SDGs. We should not look at it as zero sum game and it can be a positive game."

Former Ambassador of Bangladesh to India Tariq Karim said that of all BRI projects, there are five-six important projects China is investing under the BRI including Padma bridge railway link, Payra power plant, digital connectivity and power grid network.

He said the South Asian region has 300,000 megawatts of hydropower potential lying unutilised as investors are not willing to invest for not having assurance of power movement. "There has to be corridors for power movement from one country to another," he said.

He said the world is transitioning from an old order to a new order.

"Is the BRI then a Chinese blueprint towards replacing the US hegemony through economic primacy?" he questioned, adding it will clear within next one or two decades.

Mr Karim, who is also Advisory Consultant to the World Bank for Regional Integration, South Asian Region, said policy coordination is the most important thing for a transitioning world.

He said that policy coordination is needed as a growing number of people started feeling left out from older regulatory framework, establishments and institutions.

Mr Karim said climate change and its effects have to be addressed whatever policy comes in the new world order.

He blamed political barrier for not being implemented the Bangladesh-China-India-Myanmar Forum for Regional Cooperation (BCIM), a major sub-regional initiative which was recently excluded from the BRI.

He expressed the hope that the BCIM might emerge anytime again at the forefront of regions' connectivity initiative as much work has been done of this four-nation corridor.

He said cost of BRI projects, for some countries, costly and might outweigh its gains due to huge public debt.

"If fully implemented, BRI transport projects could increase trade between 1.7 per cent and 6.2 per cent for the world, increasing global real income by 0.7 per cent to 2.9 per cent," he said.

Mr Ibrahim, who was the president of Dhaka Chamber of Commerce and industry, said the participating countries of BRI should ensure transparency, good governance and accountability for maximising benefits.

He said the BRI projects also have environmental risks. "There is an estimate that the BRI transport project will increase carbon dioxide emission by 0.3 per cent worldwide."

For example, she said, Renminbi (RMB) and Bangladeshi Taka now can be exchanged directly with one anther. This is a great policy decision.

She also stressed the need for strengthening financial connectivity among the BRI participating countries.

Assistant Professor at Shanghai Academy of Social Science Liu Jinqian said India has more roles to play in regional connectivity. He also said BRI projects are aiming to establish peace and connectivity for all.

Deputy Executive of South Asia Watch on Trade, Economic and Environment (SAWTEE), Nepal Dr Pushpa Sharma said there has not been much research on debt failure to see whether the recipient country and BRI is responsible for the failure.

He said that every country should do cost and benefit analysis before beginning a project to avoid debt failure.

Research Director of Bangladesh Institute of International and Strategic Studies (BIISS) Dr Mahfuz Kabir said debt sustainability is a question for BRI projects. If Bangladesh continues to borrow more and more, the country will not be able to avoid debt trap, he said.

Logistics Expert Abu Sayeed Khan said China embarked on BRI journey due to its success of internal transport and communication system. He said that Nepal could be entry point for China in South Asia like Kazakhstan has become the Chinese door to Europe.