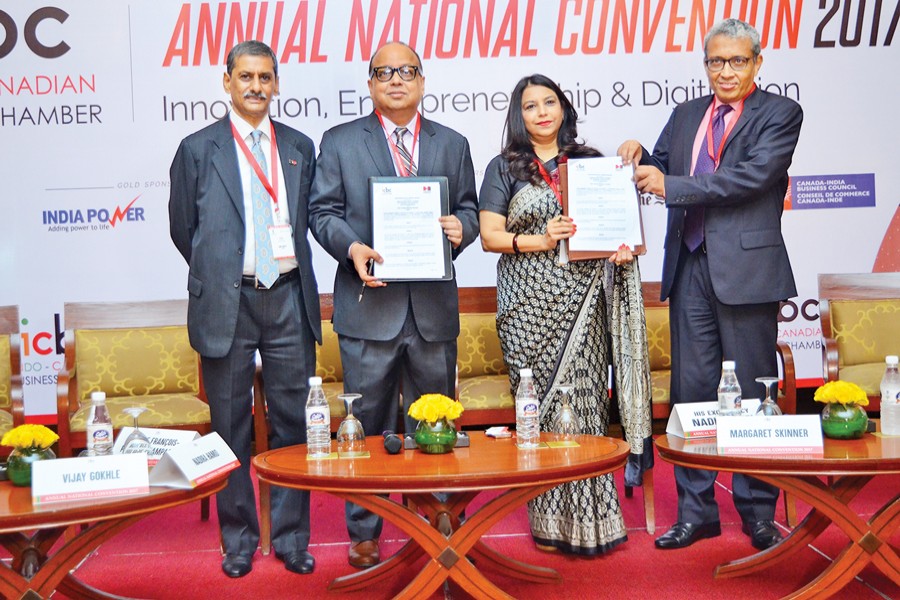 Masud Rahman, president of CanCham Bangladesh, Nadira Hamid, CEO of the Indo-Canadian Business Chamber (ICBC), and Sanjeev Mittal, president of the ICBC, among others seen at the MoU signing ceremony between the two chambers in New Delhi recently.

The CanCham Bangladesh and the Indo-Canadian Business Chamber (ICBC) recently teamed up aiming to enhance bilateral trade with Canada through delegation exchange, business forums and events of both the chambers.

A memorandum of understanding (MoU) was signed between the two chambers recently at the ICBC annual national convention held in India, according to the CanCham.

Canadian ministers of international trade and innovation science and economic development François-Philippe Champagne and Navdeep Singh Bains were present in the convention.

A delegation from the CanCham Bangladesh led by its president Masud Rahman joined the ICBC Annual National Convention 2017.

The MoU is expected to provide a platform for CanCham Bangladesh to network and form business alliances with Canadian and Indian companies to promote trade and investment.

Over 300 participants including some 100 Canadian companies, both Indian and Canadian government officials, bureaucrats and corporates attended the convention.