Foreign, local investors come up with US $15b investment proposals

Meanwhile, foreign and local investors have made investment proposals worth US $15 billion till Setember last for the MEZ, the first economic zone of the country which is being developed on 30,000 acres of land.

Sources said, the number of industrial plots at the MEZ will be increased notably due to growing demands by both local and foreign investors. 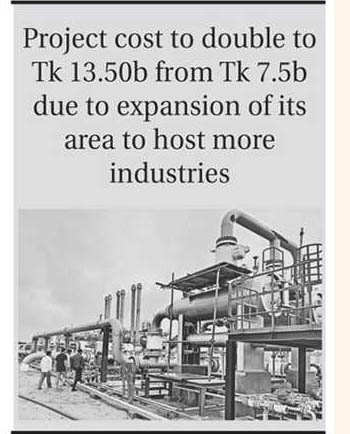 They said, a revised Development Project Proposal (DPP) from the Bangladesh Export Processing Zones Authority (BEPZA) has already been sent to the Planning Commission in this regard. According to the revised proposal, the project cost will go up to more than Tk 13.50 billion (Tk 1350.38 crore) from the original cost of over Tk 7.5 billion (Tk 750.58 crore).

Currently, eleven factories are being constructed by different conglomerates and business groups at the MEZ and by 2021, twenty more companies will start factory construction.

The sources said, Yabang Group is investing $1.0 billion in the allotted 100 acres of land and Bashundhara Group, one of the big conglomerates of the country, setting up an industry on 500 acres of land.

Considering that the MEZ will serve as a major investment hub for the readymade garment (RMG) sector, the Bangladesh Economic Zones Authority (BEZA) is planning to add another 13,000 acres of land to the 30,000 acres in order to expand the area of the EZ.

BEZA sources said the MEZ will be constructed phase by phase.

The ongoing first phase construction work was started to build 250 industrial plots initially. But the BEPZA has proposed that 539 industrial plots be readied since the authority believes such a measure will ensure an additional $2.7 billion in investments and will generate 0.4 million (4.0 lakh) jobs. So, the number of plots will be increased due to rising demands from the local as well as foreign investors, the sources said.

As per the revised Development Project Proposal, the size of 539 industrial plots will be over 1.81 million (18.18 lakh) square metres.

To ensure sustainable utility facilities and connectivity, Bangladesh Water Development Board (BWDB) is constructing a coastal embankment and a slope protection embankment to defend the project area from flood, saline intrusion, erosion triggered by the tidal surge and other natural disasters. The Roads and Highways Department (RHD) is constructing an 18-kilometre-long pavement and a 10-km access road to the project area.

The Rural Electrification Board (REB) has already installed a power distribution line and a substation. The Department of Public Health Engineering (DPHE) is sinking deep tube-wells and building a water reservoir. Besides, Karnaphuli Gas Distribution Company Ltd (KGDCL) is working to upgrade an existing gas distribution network from 350 mmcfd to 500 mmcfd to facilitate adequate gas supply to bulk and industrial consumers.

BEZA executive chairman Paban Chowdhury said, the MEZ is going to be the first state-owned industrial enclave to see industries operating. A total of 100 economic zones will be set up across the country. Most of the EZs will be established in Chattogram and neighbouring southeastern districts as Chittagong Port is located in this region.

"I hope that the first phase of the MEZ will be completed soon. After establishing the economic zone here, the job opportunities of the people will be substantially increased," he added.