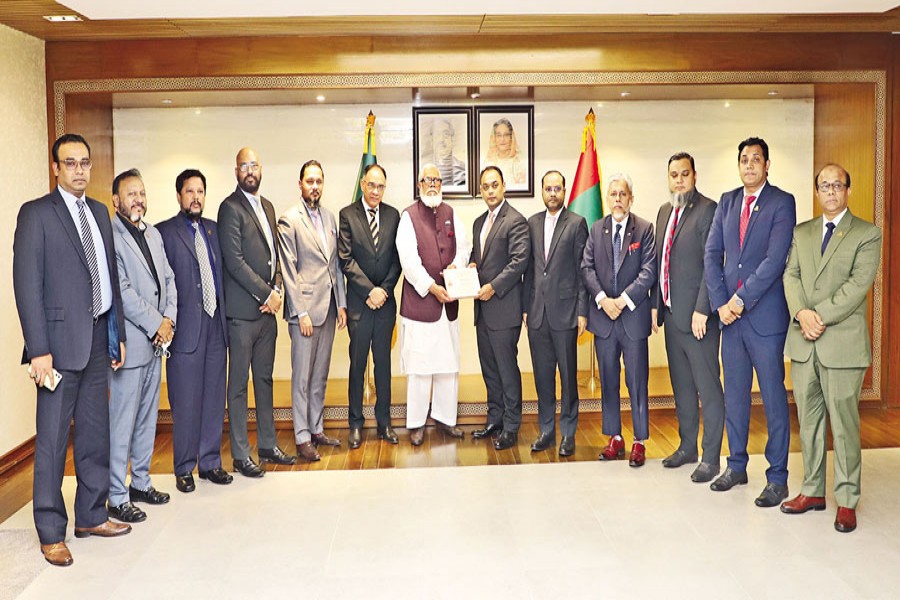 DCCI Board of Directors led by its President Barrister Md Sameer Sattar called on Salman Fazlur Rahman, Private Sector Industry and Investment Adviser to the Prime Minister, at the BIDA office in the capital on Tuesday.

The Dhaka Chamber of Commerce and Industry (DCCI) has underscored the need for attracting more local and foreign investments in order to help the country overcome the current global economic challenges.

The trade body made the observation when the DCCI board of directors led by its President Barrister Md Sameer Sattar called on Salman Fazlur Rahman, Private Sector Industry and Investment Adviser to the Prime Minister, at the BIDA office in the capital on Tuesday.

During the meeting, DCCI President Sameer Sattar suggested reforming the Arbitration Act 2001, the Bankruptcy Act 1997 and the Companies Act 1994.

He said the amendments should be made keeping the business sector in mind so that businesses can enforce contracts easily in Bangladesh and resolve any commercial disputes expeditiously.

He also called for setting up a separate commercial court, which may ease the process of contract enforcement and resolution of disputes in an expeditious manner as well as reduce the backlog of pending commercial disputes.

"The bankruptcy laws also need an overhauling to make it applicable to companies and more business friendly so that sick companies can be restructured in an effective manner rather than being pushed to closure through liquidation. It needs to be more commercially viable," he said.

Resultantly, this will attract foreign direct investment (FDI) in Bangladesh, he said.

In this regard, Bangladesh can adopt the best international standards from other developed jurisdictions, he maintained.

Mr Sattar also emphasised the need for an effective and fully integrated One Stop Service (OSS), preferably throughout the country for the greater convenience of the existing businesses and upcoming investors.

He said that all institutions connected to the OSS must operate in such a manner that investors do not have to go to various institutions separately once an application has been made to BIDA's OSS.

"This will undoubtedly encourage foreign investors as well to invest in Bangladesh," he said.

He also emphasised that following the LDC graduation, Bangladesh needs to ensure a competitive and self-sufficient business environment in order to attain the double-digit GDP growth.

Salman Fazlur Rahman said that due to the adverse effects of the pandemic and Russia-Ukraine war, the world economy is experiencing a critical time.

In such circumstances, FDI and global trade flow can be a greater enabler of the desired economic recovery of Bangladesh.

Mr Rahman put emphasis on the resurgence of the local and backward linkage industry through substantial investment.

DCCI Senior Vice President SM Golam Faruk Alamgir (Arman), Vice President Md. Junaed Ibna Ali and members of the board of directors of DCCI were also present, among others, during the meeting.