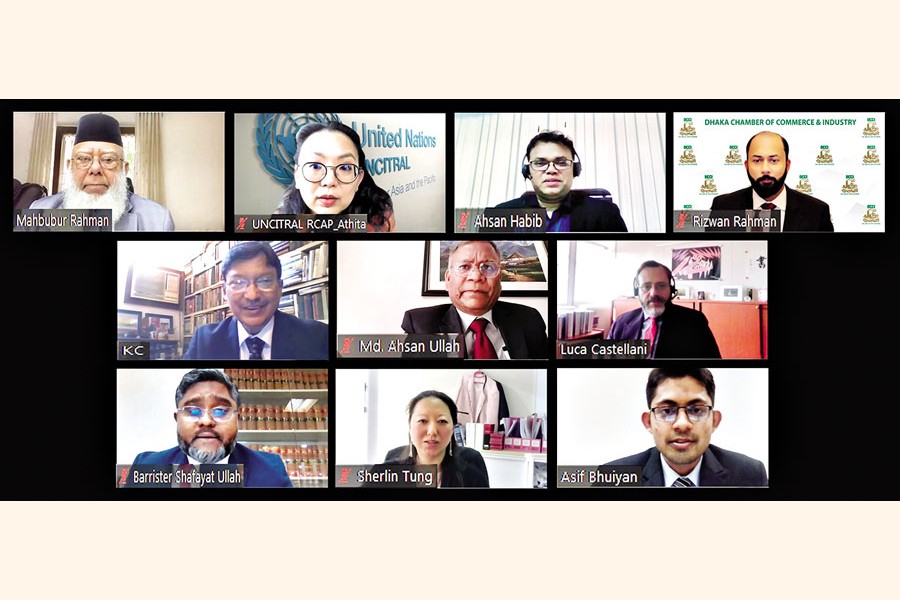 Chairman of BIAC Board Mahbubur Rahman (top left) and other distinguished persons take part in a webinar on 'Alternative Dispute Resolution and International Sale of Goods: Time to Benefit from CISG?' held via Zoom recently

Experts at a webinar stressed the importance of Alternative Dispute Resolution (ADR) and the UN Convention on Contracts for the International Sale of Goods (CISG) in out-of-court dispute settlement.

The Bangladesh International Arbitration Centre (BIAC) organised the webinar on 'Alternative Dispute Resolution and International Sale of Goods: Time to Benefit from CISG?' jointly with the United Nations Commission on International Trade Law (UNCITRAL) - Regional Centre for Asia and the Pacific (RCAP) via Zoom recently, says a press release.

In his closing remarks, Mahbubur Rahman, Chairman, BIAC Board and President of International Chamber of Commerce-Bangladesh, said the country will greatly benefit from adopting the CISG Convention as it provides a uniform regime for out-of-court dispute settlement for international sale of goods, which will introduce greater certainty in commercial transactions.

Substantive findings of this webinar will be forwarded to the authorities concerned of Bangladesh government for their review and favourable consideration, he stated.

Kaiser A Chowdhury, Chief Executive Officer of BIAC, in his welcome address, stated that hosting such a webinar should lead us to take the initiative to establish an efficient framework for dispute resolution and work to ensure that the Bangladesh government considers this Convention in order to improve supply chain management efficiency and boost the usage of ADR.

Athita Komindr, Head of UNCITRAL RCAP, Republic of Korea, also delivered a welcome address and provided an overview of UNCITRAL's mandate on furthering the progressive harmonization and modernization of international trade and commercial law, how the UNCITRAL RCAP promotes UNCITRAL's mandate to public and private stakeholders in about 60 jurisdictions that it serves, and regional developments pertaining to the CISG.

She also introduced UNCITRAL's first online learning course that is available on the UNCITRAL website.

Luca Castellani, Legal Officer of UNCITRAL RCAP, discussed the basic features of the CISG, stressing its flexibility and ability to adjust to supervening circumstances.

Noting the economic importance of export of manufactured goods, he invited Bangladesh to consider adoption of the Convention to increase governance and legal predictability in cross-border supply chains and to reduce transaction costs.

He added that such step could significantly contribute to post-pandemic economic recovery.

Sherlin Tung, Partner, Withersworldwide, Hong Kong, discussed the benefits of the CISG for commercial parties involved in international commercial transactions and gave insight on the situation of implementation of the CISG in Hong Kong.

She noted that the CISG, like arbitration, offers parties who enter into cross-border commercial transactions, a neutral law that is familiar to all parties involved as well as consistency and stability.

Md Ahsan Ullah, former executive director of Bangladesh Bank, stated that the CISG would help combat any situation arising out of International Trade Disruption and protect the interest of the parties.

He said Bangladesh should seriously consider becoming a signatory to the CISG Convention in order to gain the current and future benefits of the Convention, which will help boost foreign investment, in particular, and the country's economy, in general.

Rizwan Rahman, President of Dhaka Chamber of Commerce & Industry (DCCI), said the international trade volume of the country exceeds $100 billion within which the share of exports was US$ 45.39 billion in 2021 and with such a growth, commercial disputes increased as well.

He stressed that Bangladesh is poised to graduate into a developing country by 2026, resulting in various changes and challenges in the international trade landscape.

He further added that effective implementation of ADR and CISG would ease enforcing a contract to a large extent, resulting in the sustainability of a smooth cross-border trade environment and growth after post-LDC graduation.

Barrister Shafayat Ullah, Head of Mutual Trust Bank's Group Legal Affairs Division, opined that a binding sale contract may ensure the safety and security of the banks and traders with the inclusion of the Arbitration Clause and Compensation Clause.

He stressed that in due course Bangladesh should become a ratifying country of the CISG and UNIDROIT Principles to be in a better position to protect itself during trade interruptions.

However, for the sake of secured trade and financing, training programme, awareness and capacity building events are required to be arranged, he added.

Dr Shah Md. Ahsan Habib drew attention to the importance of the ratification of the CISG and UNIDROIT Principles and opined that the Contract Act 1872 should be amended and upgraded in line with CISG & UNIDROIT provisions to expand exports and also protect local traders from risks.

Asif S. Bhuiyan, Assistant Counsel of BIAC, hosted the webinar. The daily Bonik Barta was the media partner of the event.