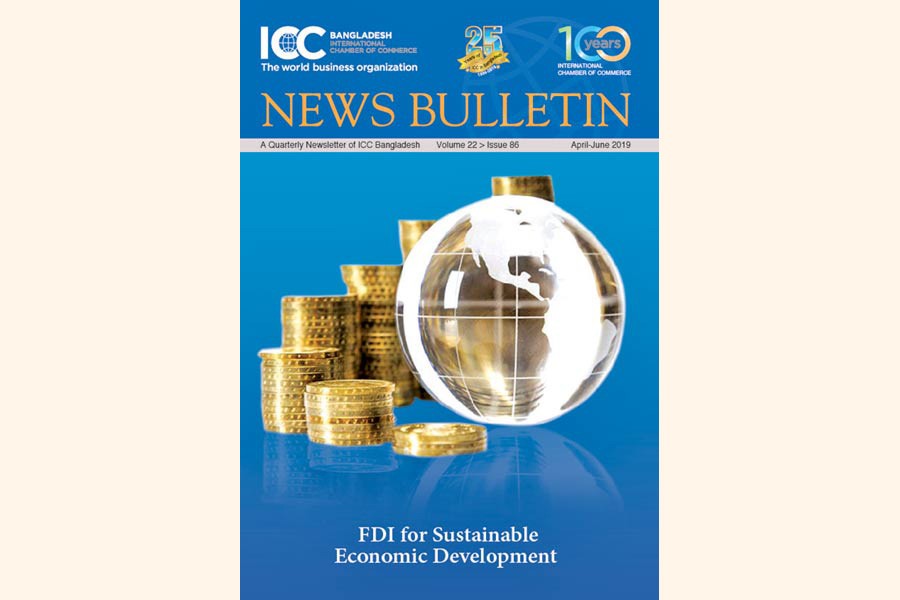 "FDI has for long been the most viable method of wealth and technological transfer between the developing and the developed countries of the world," as per the bulletin released here on Tuesday, reports BSS.

According to the bulletin, FDI is considered to be the most powerful international mechanism for mobilising tangible and intangible assets that are essential for growth and development.

Global flow of FDI continued their slide in 2018, falling by 13 per cent to US$ 1.3 trillion. The decline - the third consecutive year's fall in FDI - has been mainly due to large-scale repatriations of accumulated foreign earnings by United States multinational enterprises (MNEs) in the first two quarters of 2018, following tax reforms introduced by Trump administration at the end of 2017.

Over the past 30 years, the nature of international business investment in developing countries has evolved beyond a relatively narrow focus on the extractive industries (UNCTAD, 2007) to become one of the cornerstones, along with trade, of global value chains (GVCs).

Many developing countries are now involved in the production of increasingly sophisticated goods and services that feed into the integrated international production networks of multinational enterprises (MNEs), and a growing middle class, especially in the upper middle-income countries, has underpinned increases in market seeking investments.

To achieve the 2030 agenda, the international community must embark on a path of collective efforts, including providing support to many developing countries to increase investment in numerous fields.

It is estimated that the total annual financing needed to reach the SDG targets would range between $ 4.6 trillion to $ 7.9 trillion at the global level. The total annual investment gap in key sustainable development sectors is estimated at $ 2.5 trillion by UNCTAD and many states must double their current infrastructure investment levels.

Given the fragility of investment in many developing economies, meeting these daunting targets require stable and steady flows of investment finance.

In the Asia-Pacific region, United Nations Economic and Social Commission for Asia and the Pacific (ESCAP) has estimated that financing SDGs would require an additional investment of $ 1.5 trillion per year or an average of 5 per cent of GDP.

For the Least Developed Countries (LDCs) in the region, the challenge is even bigger as it requires 16 per cent of GDP to finance the SDGs. This clearly suggests that in addition to national efforts, the region needs to strengthen its regional cooperation to facilitate the achievement of the SDGs through adequate financial resource mobilization among all countries in the region.

It may also require significant efforts to reform global financial frameworks eventually, perhaps covering domestic regulations and international rules as well as the roles of financial institutions, with strong commitment from all stakeholders.

However, mobilizing sufficient financing remains the major challenge to achieve the SDGs Agenda. Although interests in inclusive and sustainable financing are growing from both public and private sectors, the most needed investment for SDGs related projects remain underfunded.

Systemic risk is also rising amidst uncertainty about the global economy from increasing debt burdens and trade policies towards protectionism.

It is therefore recommended that the countries undertake innovative approaches in achieving the SDGs through strengthening and diversifying financial flows that may mobilize through taxation and fiscal management, ODA, commercial banking, capital markets, non-bank financial schemes, climate finance, small business and supply chain financing and remittance as well as FinTech solutions and STI finance.

The change of investment mindset from short-term to longer-term is also crucial to enhance inclusive and sustainable economic development globally so that no one is left behind, in particular the low income group.