People's queues at TCB trucks in Ctg get longer 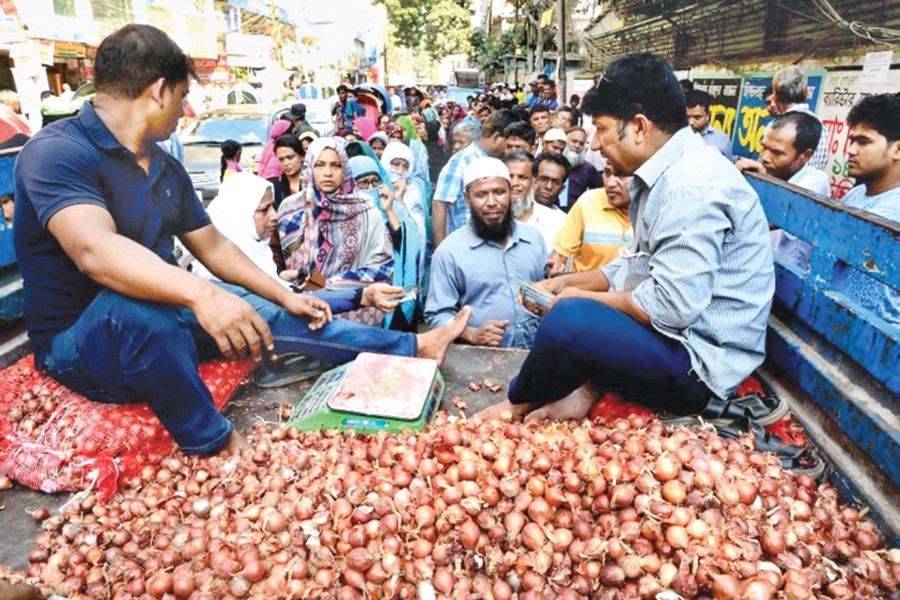 CHATTOGRAM, Oct 18: People's queue at open market sales trucks of the Trading Corporation of Bangladesh (TCB) is getting longer day by day for buying onion at subsidised rate in Chattogram though the stock of the kitchen staple in the port city is said to be satisfactory now after arrival of imported onions.

Traders said, there is a huge stock of onions at the wholesale hubs at Khatungonj and Chaktai as imported onions hit the markets last week.

After arrival of the imported onion, its price has decreased by Tk 05-07 per kg to Tk 45-66 a kg at the wholesales but the cost of the key cooking spice remained static at its previous high of Tk 70-100 at the retails.

On Sunday, the wholesalers were selling imported Pakastani onion at Tk 60 per kg, which was Tk 66 a kg in the last week, Chinese onion at Tk 55 (Tk-07 decrease from the past week), Myanmar onion at Tk 45 (cheaper by Tk-05 from previous week).

On the other hand, Pakistani onion was sold at Tk 100 per kg, Chinese one at Tk 90 a kg and Myanmar onion at Tk 70 on the day at the city retails.

As the onion price has not yet decreased at retails, long queue of buyers were seen at the back of OMS trucks on Sunday when the TCB agents struggled to maintain queues of customers who remained standing at the makeshift sales point for hours to purchase onion at affordable price of Tk 30 a kg out of desperation.

The TCB is selling onions by eight trucks in the city.

Assistant Director of TCB Chattogram Office Asaduzzaman said, "We are selling onions and other essentials by the eight trucks at different spots in the city today. The truck sale remained stopped on Friday and Saturday for weekly holidays. Today, people are buying onion and other essentials from TCB trucks."

Visiting different retail markets, including Kajirdewri and Reajuddin Bazar, on Sunday this correspondent found that onion prices remained high till the day. The retailers said that they purchased the imported onion at a high rate last week, so they were selling it at a higher rate on Sunday.