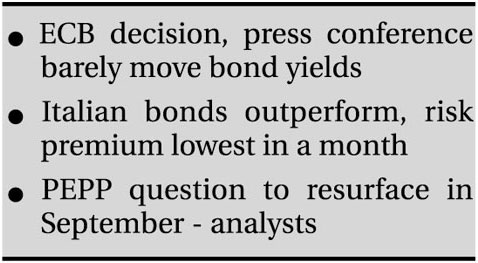 The ECB raised its growth and inflation projections for this year and next on Thursday as the bloc's economy started to roar back to life after over a year of coronavirus restrictions.

President Christine Lagarde also said the ECB saw risks to growth as "broadly balanced", a shift away from the bank's long-standing assessment of risks as tilted to the downside.

But, despite a recovering outlook, the ECB said it would maintain its elevated pace of pandemic emergency bond purchases (PEPP) during the third quarter.

Lagarde's press conference coincided with data showing U.S. consumer prices increased 5% in May, the most since 2008 and above consensus, which pushed up U.S. Treasury yields.

Germany's 10-year bond yield, the benchmark for the euro area, rose as much as 3 basis points to -0.21% following the inflation data. That reversed and the yield was unchanged by 1404 GMT after Lagarde's press conference, below levels prior to the ECB's policy decision.

"There were mixed messages in this meeting and on the general outlook. But they have taken the decision not to reduce the pace of purchases and have tried to sound dovish and avoid the risk of tightening financial conditions," said Antoine Bouvet, senior rates strategist at ING in London.

Bonds from Italy and Portugal, among the biggest beneficiaries of the PEPP purchases, outperformed as yields, which move inversely with prices, were down 3 to 4 basis points following the conference.

That pushed the closely-watched Italy-Germany 10-year bond yield spread to 104 bps, its lowest in over a month.

"The 'steady hand' theme from Lagarde is a clear message as well as the possibility of a higher runrate of (quantitative easing) purchases in the future. That is supportive to all spreads," said Commerzbank strategist Rainer Guntermann, referring to governments like Italy that pay a yield pick-up over Germany.

Their debt rallied even as Lagarde admitted that there had still been a debate on the pace of PEPP, which hawkish policymakers earlier this year advocated slowing down during the third quarter.