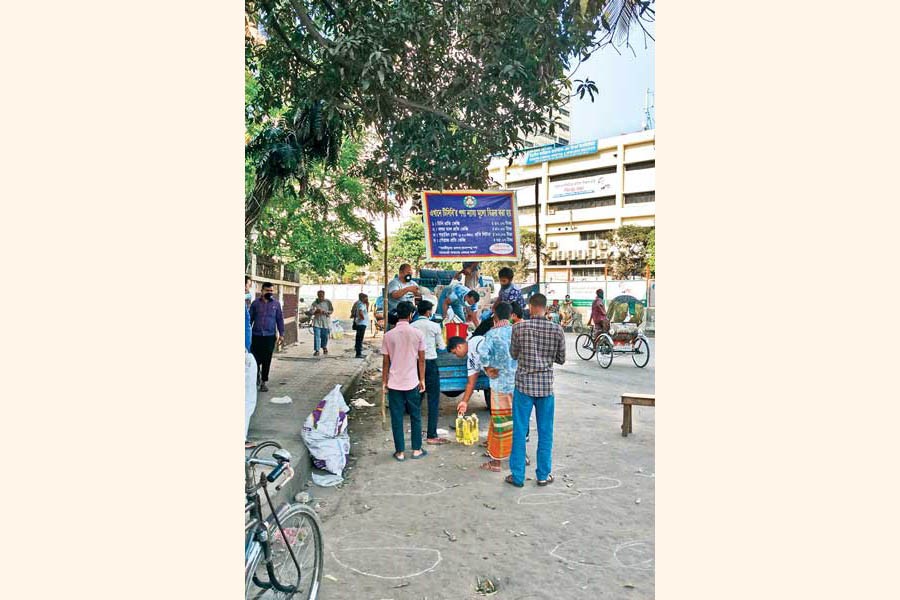 Few consumers buying essential items from a truck posted at Shahbagh crossing in the city by the TCB dealers on Monday. Though lentil and onion were listed in the banner, the consumers did not get the items — FE Photo

The dealers appointed by the Trading Corporation of Bangladesh (TCB) have posted trucks at different parts of the city on Monday, but with a very limited number of items.

As a result, the consumers alleged that they failed to purchase essential products as per their requirement due to insufficient supplies.

They said they went to the sales points in different areas from 9:30 am, but many of them left without having their desired products after hours of waiting.

"I'm lucky that I could collect sugar, edible oil and lentil after waiting for nearly two hours," Md Abdul Majid, a private service holder, told the FE near Motijheel AGB Colony on the day.

However, the presence of consumers was seen very thin, but they could not purchase the desired products even after waiting several hours.

The banners put on the trucks had lists of products like sugar, lentil, edible oil and onion. But all the listed items were not available on the trucks, according to a spot account.

"I failed to purchase sugar and edible oil even after waiting one and a half hours in front of a TCB designated dealer," said Md Mostafa, a small trader from the same area.

Like Motijheel AGB Colony area, many consumers in other areas like Shajahanpur kitchen market, Malibagh kitchen market, Khilgaon Taltola, Mugda and Shahbagh failed to purchase the items due to insufficient supply and lack of availability of all the items.

"We are selling only the allocated items at specified quantity. How we will sale more in quantity without sufficient supply?" said a salesman of a truck posted in Malibagh kitchen market area.

High prices of sugar, lentil and edible oil in the city's retail markets have prompted the consumers to the TCB sales points, said a consumer.

"We have been increasing the number of trucks for selling sugar, lentil and edible oil considering the increased demand for the items," TCB spokesperson Md Humayun Kabir said.

Asked when the TCB will start selling gram and dates, he said: "We are considering starting to sell gram in the second week of this month and dates at the end of this month."

Mr Kabir said the TCB will cancel the dealers' licences if found any corruption in selling the goods.

The TCB started selling essential commodities across the country on April 01 to keep the prices stable during the upcoming holy month of Ramadan.

A total of 58 dealers have been engaged for selling sugar, lentil and edible oil.

The TCB is also selling commodities in Chattogram with 16 trucks while 10 trucks have been posted in the divisional cities and four in the district towns.

A consumer could purchase four kilograms of sugar, two kgs of lentil and five litres of edible oil at a time at Tk 50 a kg, Tk 50 a kg and Tk 80 per litre respectively.

The TCB has already stocked a substantial amount of commodities in its warehouses to facilitate ensuring price stability and avert any possible disruption in supplies.