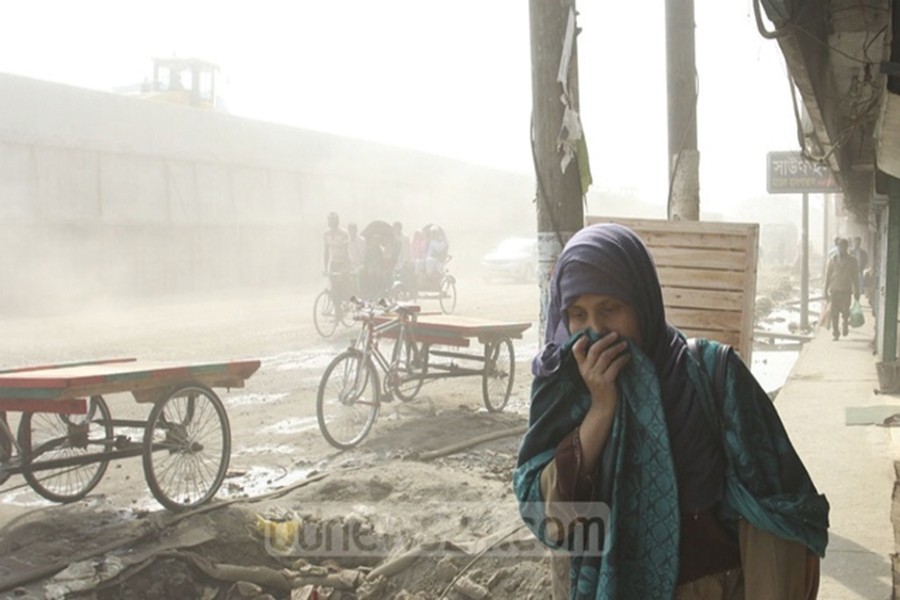 The High Court in January this year ordered the Department of Environment to conduct mobile court drives twice a week in Dhaka city to take action against air polluters: Pedestrians have to cover their faces when walking amid the dust-filled air in city's Postogola. —Photo: bdnews24.com

Cool and dry months are expected now in Bangladesh. Dhaka air is already letting us know that the city is dusty and unhealthy. Not only in Dhaka, all the major towns and urban growth centres of Bangladesh have been facing increasing air pollution-related problems. As reported on October 23, 2019, air quality index (AQI) value showed 176 for Dhaka (AQI ranging between 151-200 shows that the air is unhealthy). AQI surveys suggest that Dhaka is the second most polluted cities of the world. In Bangladesh AQI is based on the presence of particulate matters (PM10 and PM 2.5), oxides of nitrogen, carbon monoxide, sulfur dioxide and ozone (all harmful gases and fine dust particles). The Department of Environment regularly reports AQI findings based on the real time monitoring data of the ambient air pollutants captured at the monitoring stations installed at 8 major cities of the country. Records of AQI for last couple of years clearly indicate alarmingly increased levels of air pollution in the country.

Two US-based institutes -- Health Effects Institute (HEI) and Institute for Health Metrics and Evaluation (IHME) released in April 2019 a report titled 'State of Global Air 2019'. According to the report, at least 123,000 people died in Bangladesh in 2017 due to indoor and outdoor air pollution. The aforementioned institutes used air pollution data for the period 1990-2017 and estimated that the life expectancy in Bangladesh would have seen the highest gain of nearly 1.3 years if the country's air pollution level met the World Health Organisation (WHO) standards. The report also suggested that air pollution emerged worldwide as a major risk factor and remained responsible for more deaths than many widely discussed health hazards like malnutrition, alcohol abuse and physical inactivity. The report revealed that in 2017, air pollution was the fifth highest (after stroke, diabetes, heart attack, lung cancer) mortality risk factor globally.

While analysing the state of major contributing factors of outdoor air pollution, analysts find that active brick kilns, various construction works and vehicular movements have a major role in increased air pollution in and around the cities and towns in Bangladesh. On the other hand, use of solid fuels (firewood, agriculture wastes including cow dung) for cooking and the practice of using cooking stoves are the major contributing factors for indoor air pollution. A research work titled 'Benefits and costs of household cooking options for air pollution control -- Bangladesh priorities' carried out by environmental economist Bjorn Larsen in 2016 reported that 86-88 per cent of the households in Bangladesh used to cook with solid fuels, predominantly with fuel wood and agriculture residues and dung. The report further suggests that exposers to PM2.5 within the range of hundreds of micrograms per cubic meters of air are caused by such cooking practices. The pollutants cause severe health effects in the form of diseases and premature deaths. Women and children and elderly people spend most of their time indoors and become exposed to indoor air pollution. Monitoring indoor air quality is more challenging than monitoring air pollution at open spaces.

Indoor air pollution can significantly be reduced if the widely used cooking stoves and fuel for coking are changed. Already there are improved stoves in the market that consume less fuel (biomass), deliver better heat for cooking pots, reduces heat loss, and emit lesser amount of pollutants. The improved biomass coking stoves with exhaust chimney are not very expensive. Cleaner fuels like LPG for cooking are also available in the local market. LPG is a good cooking fuel and it has been gaining popularity among well-off families mostly in the urban areas. The cost of LPG is still not attractive for 'poor' people. Therefore target oriented campaign for use of improved cooking stoves and for making available cleaner cooking fuels like LPG at affordable cost may attract larger sections of consumers.

Mushfiqur Rahman is a mining

engineer and writes on energy and