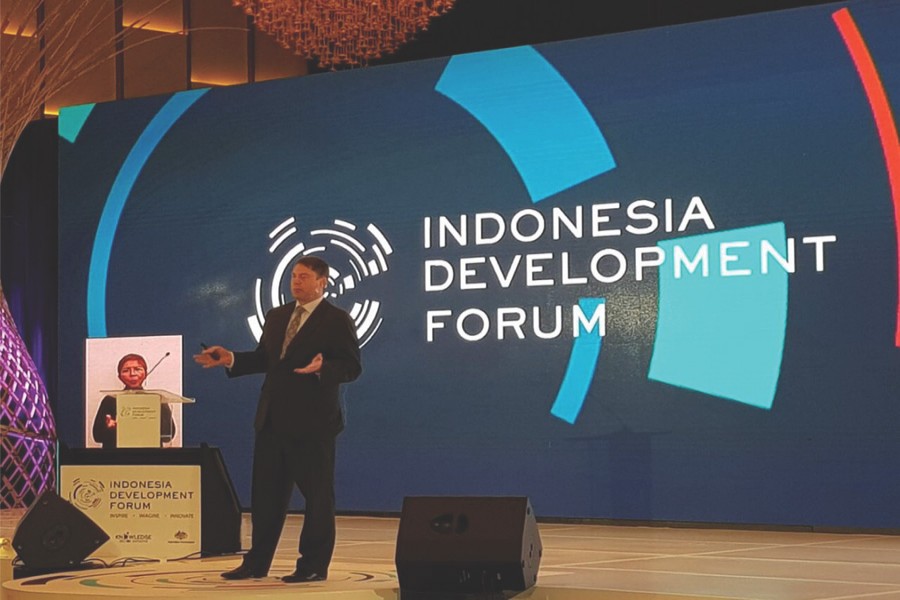 'Last month, scholars, practitioners, and policymakers from around the world gathered at the Indonesia Development Forum to explore solutions to the many forms of inequality that are affecting Indonesia today.'

When Indonesia declared independence from Dutch rule in 1945, the country's founder, Sukarno, called on his people to build a nation that would "stand in strength," eternally united. That mantra - unity and strength - helped shape the country's future, including its approach to economic development. During much of Indonesia's early history, its egalitarian distribution of wealth and assets set it apart from its neighbours.

But seven decades later, the legacy of equality is fading. If Indonesia is to remain one of Asia's most robust economies, it is essential that its current leadership recommit to narrowing the socio-economic gap.

During much of the 1970s and 1980s, Indonesia's low level of income inequality helped raise living standards and reduce poverty. In 1970, just 25 years after independence, the country managed an enviable distribution of wealth among a diverse population, with a Gini coefficient (a common measure of income inequality) of 0.35 (with zero representing maximum equality). By comparison, neighbouring Malaysia had a Gini coefficient of 0.50.

Indonesia's remained roughly the same for decades. But, since the Asian financial crisis in 1997, income gaps have widened throughout the region, and in Indonesia in particular, where social welfare programmes have barely stemmed the rise in inequality. This year, Indonesia's Gini coefficient is around 0.39, only slightly better than the 0.41 recorded in 2014.

To economists like us, this trend is deeply worrying. Because persistent high or rising inequality can contribute to political instability and undermine social cohesion, it is critical that Indonesia address it. Paradoxically, Malaysia's experience is instructive.

In Malaysia, income inequality is no longer primarily a function of ethnicity, or the rural-urban divide, as it once was. Thanks to successful redistribution strategies adopted during the 1970s and 1980s, average per capita income increased, and poverty rates fell dramatically. Though wealth distribution remains a major concern, Malaysia's Gini coefficient has been on a steady glide toward greater equality since the mid-1970s; in 2014, for example, it dropped to 0.40 for the first time ever, (though this figure remains higher than the average for OECD economies).

Indonesia is moving in the opposite direction. Not only does it have one of the highest levels of wealth inequality in the world; it also suffers deep regional disparities. The country's poorer eastern provinces, which have a history of ethnic violence, lag behind the rest of the country on human development indicators, infrastructure quality, and access to education. Despite the country's overall progress, food insecurity and child malnutrition remain serious issues in the east. In other words, it is not just Indonesia's income distribution that concerns us, but how unequal access to health care, education, and social services has become.

Our concern is widely shared. Last month, scholars, practitioners, and policymakers from around the world gathered at the Indonesia Development Forum to explore solutions to the many forms of inequality that are affecting Indonesia today. The challenges are complex, and discussions focused on the need for multi-pronged solutions. As Columbia University's Jeffrey D. Sachs noted, greater investment in education, and more effective wealth redistribution strategies, are the key areas that Indonesia's government must focus on.

The classroom is the foundation of sustainable development everywhere. Access to education is one of the best ways for poor or disadvantaged youth to become economically productive and climb out of poverty. Unfortunately, Indonesia's public schools, especially in the east, are struggling with teacher absenteeism. Children who want to learn simply cannot when their instructors do not show up. Broadening access to education is not only about boosting enrollment rates; it also requires ensuring accountability and improving service quality.

Still, reforming the education sector alone will not be enough to close Indonesia's wealth gap. Strategies that the government should consider include expanding social protection; creating more vocational-training programmes; and overhauling the tax system. In many Organisation for Economic Co-operation and Development (OECD) countries, redistributive policies, like tax breaks and expansion of welfare benefits, have helped reduce inequality. If Indonesia is to hit the targets set by the United Nations' Sustainable Development Goals (SDGs) for reducing inequality by 2030, it must follow these countries' example.

There are many reasons to be hopeful. Bambang Brodjonegoro, Indonesia's Minister of National Development Planning, has helped make social inequality a key agenda item, following the direction of President Joko Widodo. This time next year, the Indonesia Development Forum will meet again to gauge progress in our efforts to tackle regional inequality.

Clearly, the political will exists to restore greater equality to Indonesia's economy. If current leaders can remain as focused on their vision as the country's founders were on theirs, Indonesia will again serve as a model of unity and strength for the region.

M Niaz Asadullah is Professor of Development Economics at the University of Malaya in Kuala Lumpur, and Head of the Southeast Asia cluster of the Global Labour Organization. Maliki, a Global Labour Organisation research fellow, is Director for Population Planning and Social Security at the Indonesian Ministry of National Development Planning (Bappenas).