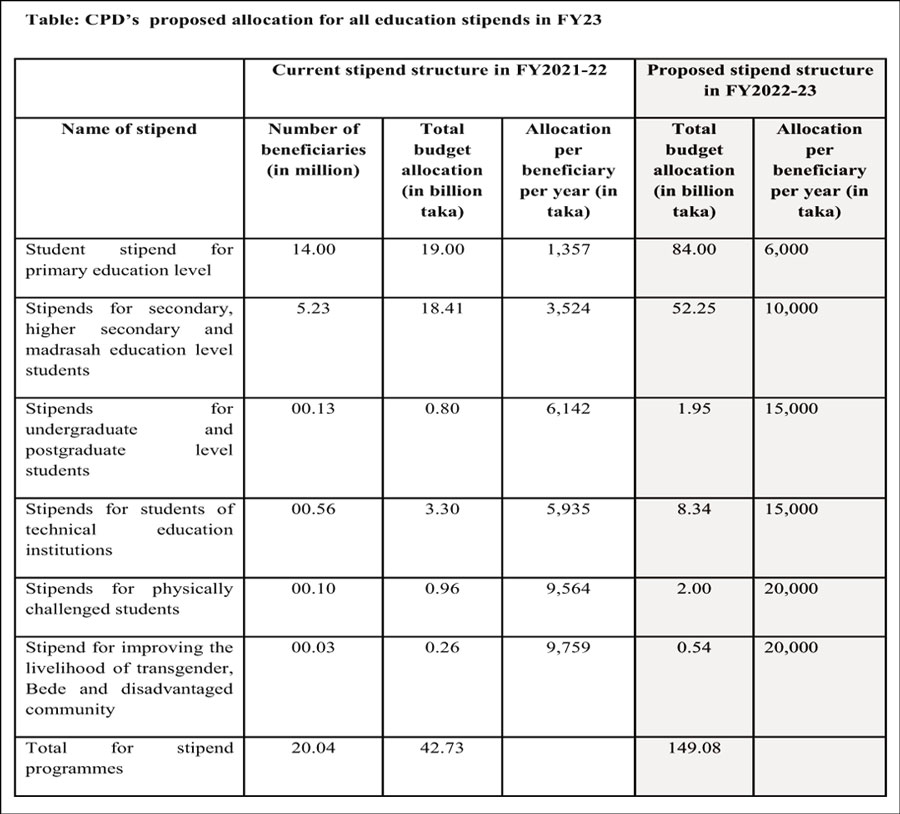 Therefore, it is necessary to not only increase the budget allocation and budget utilisation of the education sector, but also implement a number of fiscal measures to promote improved education and in turn maximise welfare for society. In the following exposition, fiscal measures for English medium schools, imported books, and female education stipend are proposed.

Additionally, since English medium schools, follow the international curriculum, the books assigned as a part of their syllabus are all imported books written by international authors. At present the total tax incidence (TTI) on foreign printed books is at 73.96 per cent. The TTI includes 25 per cent as Customs Duty (CD), 10 per cent as Supplementary Duty (SD), 5 per cent as Advance Income Tax (AIT), 15 per cent as VAT, and 3 per cent as Regulatory Duty (RD). Such high duties on foreign books intended to provide children with quality education defeats the purpose of achieving the Sustainable Development Goal (SDG) four which aspires to "ensure inclusive and equitable quality education and promote lifelong learning and opportunities for all". As the syllabus is revised, during every academic year parents have to buy new books for their children studying in English medium schools, while bearing such a high tax incidence. This puts further strain on families' incomes, particularly those from middle-income households. Therefore, CPD recommends that all taxes and duties on foreign imported books should be exempted in FY23 to ensure that education remains affordable for all.

FEMALE EDUCATION STIPEND: The economic empowerment of women is critical to long-term success for any society. The government, private sector and the non-government organisations have all played their part in the economic empowerment of women in Bangladesh. In 1982, the government of Bangladesh initiated some social safety net programmes especially targeted towards women and girls, such as the female secondary education stipend. Results from a pilot project showed that girls' secondary enrolments increased from an average of 7.9 per cent to 14 per cent in some project areas and dropout rates fell from 14.7 per cent to 3.5 per cent. In 1994, the highly successful programme was launched nationwide. Female students received a monthly sum of money ranging from Taka 25 in Class Six to Tk 60 in Class 10, as well as payments for new books and exam fees, on condition of a minimum of 75 per cent attendance rate, at least a 45 per cent score in annual school exams, and staying unmarried until sitting for the Secondary School Certificate (SSC) or turning 18 years old.

The female secondary education stipend programme in Bangladesh was not only effective in increasing girls' enrolment in schools, but also succeeded in providing a host of benefits, such as increasing the ratio of female students in secondary schools, improving female literacy rate, lowering fertility rate, controlling population growth rate and increasing female labour force participation. As a result of the catalytic benefits of its successful female secondary education stipend programme, Bangladesh managed to advance ahead of Pakistan in terms of several key socio-economic indicators. In 2018, girls comprised on 54 per cent of pupils in secondary schools in Bangladesh, whereas in Pakistan, only 44 per cent of secondary school pupils were girls. In 2017, adult female literacy rate was 70 per cent in Bangladesh, but only 46 per cent in Pakistan.

Our proposed stipend reform will benefit more than two crore students at all levels, and cost the government an additional Tk 106.35 billion.