Very recently, some scientific examinations of the ongoing pandemic have revealed that the antibodies created by the Covid-19 infections are experiencing a sharp decline. This is alarming, especially because it means that countries that are currently failing to contain community transmission such as Brazil, Bangladesh, India and Pakistan are open to a second wave of the virus until and unless they can contain community transmission decisively or a vaccine is luckily invented.

And this proposition of a deadly second wave is not unlikely. Spanish Flu in 1920 killed more people in its second wave than the first - claiming in total 20 to 50 million lives, while infecting over 500 million people. To put this into perspective, the casualties from the Spanish flu was more than all the civilians and soldiers' who died during World War- I.

Covid-19 has, so far, been less deadly, but it has infected more than 9 million people, while claiming more than 470,000 lives. The death rate from the virus hovers around 5 per cent but this might be misleading given many nations grossly undercount both the state of Covid-19 outbreak and the subsequent Covid-19 related deaths due to lack of adequate testing.

This number, nonetheless, is much higher than the total number of people who died instantaneously after the bombing of Hiroshima and Nagasaki in 1945, which should motivate us to shake off complacency that one might cherish concerning its ferocity. Interestingly, the epicenter of the virus has now moved from Europe to the Americas and South Asia, where health sector capacities are far weaker in managing the contagious virus.

Yet, if policymakers draw some key lessons from the trends that we have observed over the last six months - it is still possible to make some urgent policy corrections, which can save lives in hundreds of thousands. So, what are these lessons?

FIRST LESSON - HIGHER PER CAPITA INCOME IS NOT AN AUTOMATIC SAVIOR OF HUMAN LIVES: We can see from Figure-1 that per capita income cannot sufficiently explain the efficiency of public health response to this pandemic. Vietnam's nominal per capita income is $2200 and yet they have handled the crisis with better efficiency than countries with much higher per capita income like United Kingdom. In fact, Vietnam was able to contain the virus in less than two months while it took the advanced nations at least three months to get a level of the problem. As a social scientist with deep interest in institutional economics, I don't find this achievement surprising as the outcome reflects how state capacity for public health can be attained despite having lower per capita income, especially when political commitment of the ruling elites value something as intrinsic as public health. 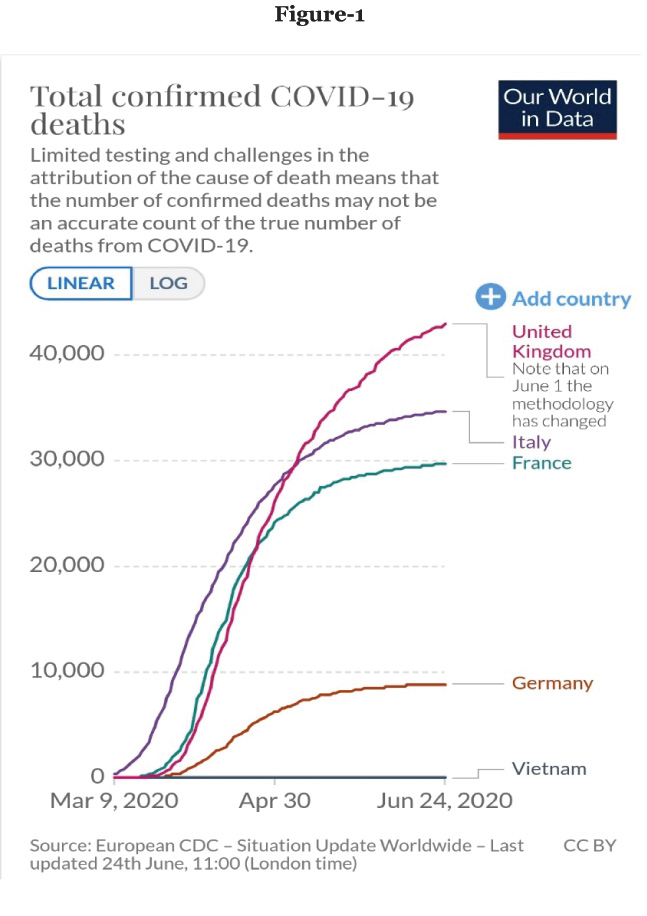 SECOND LESSON - DON'T UNDERTAKE FOOLISH EXPERIMENTS: As depicted from Figure-1, it is clear that Italy's exposure to the virus preceded France, Germany and UK's exposure to the virus. Moreover, pre-emptive measure and commitment to testing, tracing and isolation, along with the imposition of a strict national lockdown have allowed Germany and France to save more lives than Italy. Ironically, UK's experimentation with herd immunity in the beginning meant that it saved far fewer lives than Italy, which saw the first frontal blow of the virus after China. Of course, in spite of benefiting from better treatment protocol as our understanding of the virus improved, UK experienced 30 per cent more deaths than Italy and more than 4 times death than Germany.

THIRD LESSON - LACK OF LESSON DRAWING CAN BE A COSTLY CHOICE: As the virus keeps intensifying in South Asia, we can see from Figure-2 that Pakistan and Bangladesh are experiencing a very high share of Covid-19 detection- often crossing the 20 per cent threshold. This level of detection rate was once seen in Italy during its worst days. The question is - why are Pakistan and Bangladesh doing so poorly on this indicator - while India's Covid-19 detection rate is less than 6 per cent. For Bangladesh, the dominant explanation is as follows: Bangladesh did not receive the health dividend of the "lockdown", not because "lockdown" as a strategy was misplaced, but because Bangladesh did not try it in the first place. On March 26, Bangladesh declared a "general holiday" where people were asked to follow social distancing protocols quite haphazardly - mostly because it was a concept that ordinary people barely understood. The more damaging decision was taken during mid-May, when the economy was allowed to abruptly open up (with few restrictions) to appease the business interest. Most importantly, there was a strong reluctance to draw lessons from Vietnam or Kerala that received the benefits of effecting testing, tracing and isolation protocol, and a strict lockdown complemented with food at doorstep, and community awareness campaign. 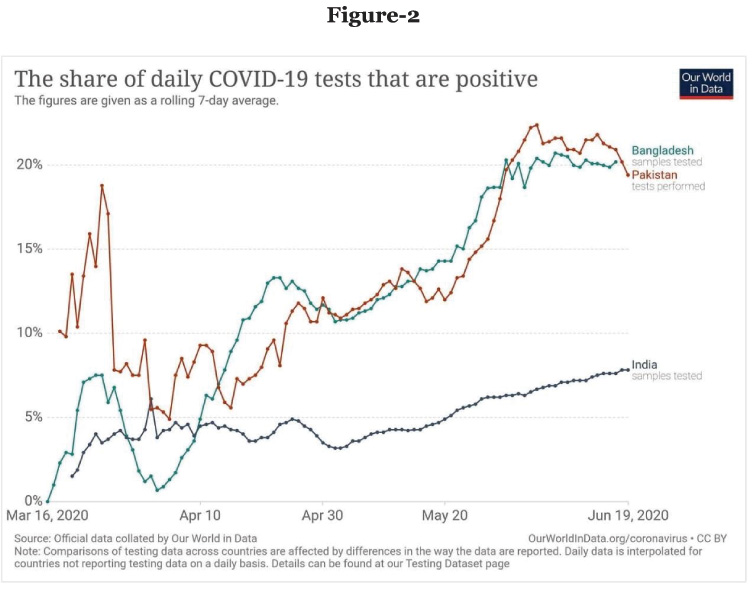 This is mostly because crony capitalists within the policymaking ecosystem "over emphasised" the importance of keeping the economy open and underplayed the health crisis with the help of highly placed bureaucrats whose allegiance was probably purchased through some degree of rent sharing. And the resultant outcome is clear: Bangladesh is still struggling with Covid-19 - with cases (even though they may remain purposefully undetected, as testing per day has seen no significant growth between June 10 and June 24) expected to reach millions over the next 100 days, which will catastrophically challenge the structural integrity of the health care sector. 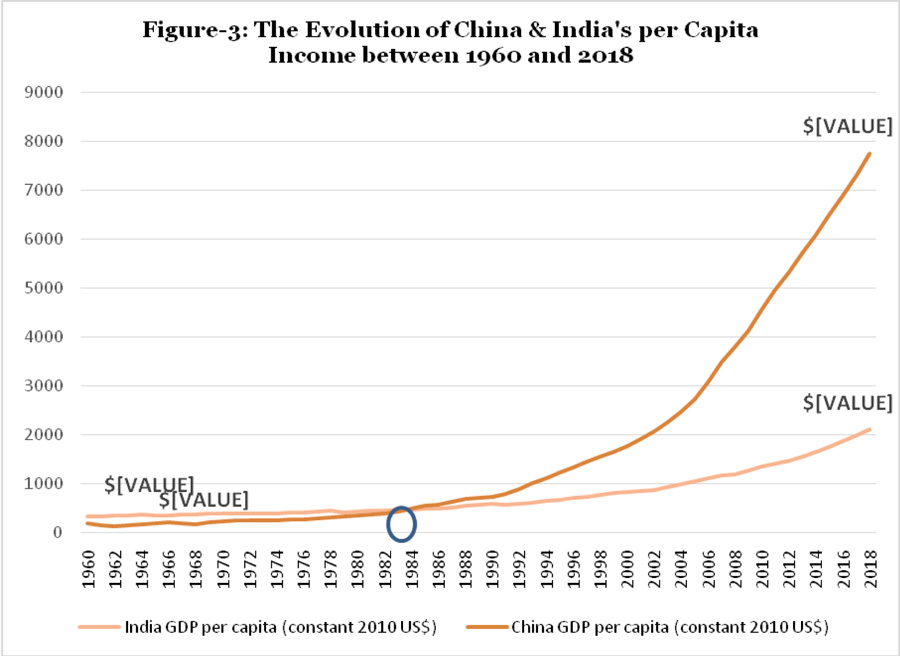 FOURTH LESSON - ECONOMIC DIVERGENCE WITHIN ASIA WILL INTENSIFY: It is very rarely mentioned in modern economic discourse that India had a higher per capita income than China for a very long period. In fact, most national account statistics highlight that per capita income of India was higher than China between 1960 and 1985, but China went past India after it embraced market centric reforms and export-led growth strategy in the late 1970s (See Figure-3). Today, China's per capita income is more than three times that of India and after this pandemic is over, one can expect that China will multiply this gain further as India struggles with internal strife, an unresolved public health crisis and weak state capacity. But over the next one decade, Asia might witness one more case of economic divergence. At present, both Bangladesh and Vietnam have similar levels of per capita income - approximately $2000 (give or take). Yet, Vietnam's decisive Covid-19 management and proactive trade policy formulation has allowed it to find indoors in Europe, which will give Bangladesh a tough run. And if a vaccine does not get invented to save Bangladesh from its current state of pandemic management, Bangladesh will look at Vietnam the way India looks at China within the next one decade.

TAKEAWAY MESSAGE: The present state of pandemic management in Bangladesh has pushed us to a decisive crossroads - where one more wrong policy move perhaps can literally wipe out all the noteworthy socio-economic achievements that the country has made over the last decade. Yet, it may not be uncommon for Bangladesh to make such a disastrous economic decision. After all, countries that were touted to become the giants of the global economic order - especially Argentina in the late 19th century - could not live up to its potential for a series of economic mistakes. Consequently, Bangladesh can choose to learn from such historical episodes if some degree of humility and introspection is present within the policy ecosystem.

Dr. Ashikur Rahman is a Senior Economist at the Policy Research Institute of Bangladesh (PRI).