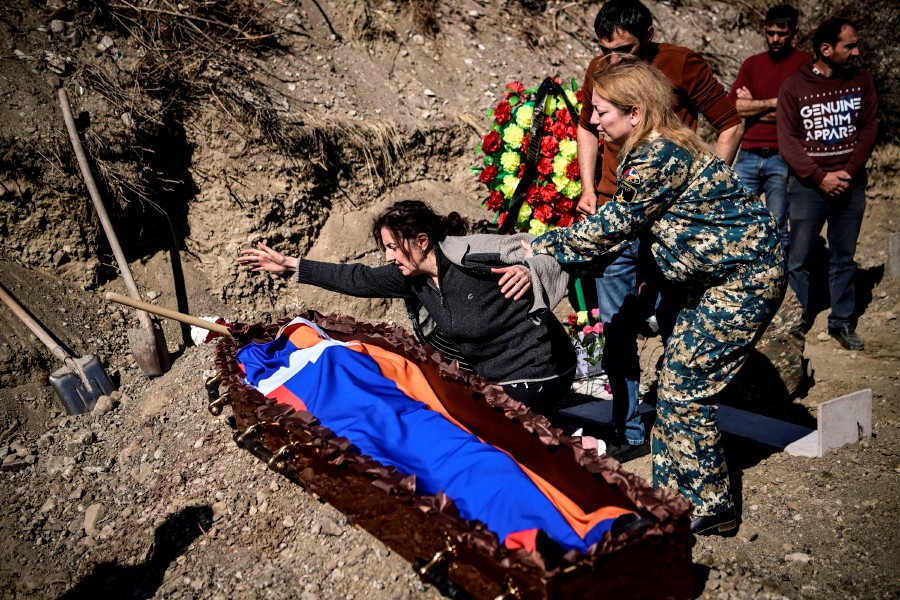 A mother mourns above the coffin with the body of her fellow son in Stepanakert during fighting over the breakaway region of Nagorno-Karabakh on October 17, 2020 —AFP photo

The Caucasus is a strategically important mountainous region in south-east Europe. For centuries, different powers in the region -- both Christian and Muslim -- have vied for control there. Armenia is majority Christian while oil-rich Azerbaijan is majority Muslim. Turkey has close ties to Azerbaijan, while Russia is allied with Armenia -- although it also has good relations with Azerbaijan.

In the recent past, in a minor border skirmish on September 16, one Armenian soldier was killed. Five days later, an Azerbaijani soldier was killed. On September 27, serious clashes re-erupted in Nagorno-Karabakh, leading Armenia to declare the extreme measure of imposition of martial law and mobilisation of its armed forces. On the same day, Azerbaijan's Parliament also declared a status of war against Armenia and limited internal movement through the introduction of curfew in several cities and regions. In terms of casualties, the clashes were the worst since 2016. Most international actors urged both sides to return to the table. The United Nations Security Council also condemned the resumption of hostilities.

The ethnic and territorial conflict between Armenia and Azerbaijan over the breakaway region of Nagorno-Karabakh has now stepped into the third week. At least 600 people have been reported killed in the fighting.

The conflict has been further complicated by geopolitics. NATO member-state Turkey was the first nation to recognise Azerbaijan's independence in 1991. Former Azeri President Heydar Aliyev once described the two as "one nation with two states". Both share a Turkic culture and populations. Turkey's President Recep Tayyip Erdogan has pledged his nation's support for Azerbaijan. On the other hand, Turkey has no official relations with Armenia. In 1993 Turkey shut its border with Armenia in support of Azerbaijan during the war over Nagorno-Karabakh.

Armenia and Azerbaijan now appear to have agreed, according to Russian Foreign Minister Lavrov, to a temporary ceasefire from midnight on October 10. The breakthrough came after 10 hours of talks between the two sides in Moscow. Both countries according to the media now plan to start "substantive" talks over Nagorno-Karabakh. The Red Cross will act as an intermediary in the humanitarian operation. Both countries appear to have agreed to Russian mediation in Moscow because Russia has a military base in Armenia and both are members of the Collective Security Treaty Organisation (CSTO) alliance. Moscow also has good relations with Azerbaijan.

Some analysts have consequently described the agreement as a "humanitarian ceasefire". However, there is still some doubt as to whether this ceasefire will really happen as agreed and also if it will come down to not only the exchange of prisoners but also whether the parties are really willing to return to the negotiating table to solve this decades long conflict.

Armenia's Prime Minister Nikol Pashinyan has said that his country could make concessions over the region if Azerbaijan would do the same.

It may be noted that violence has periodically flared up in the breakaway region, which is inside Azerbaijan but is controlled by ethnic Armenians. This has happened for the last four decades. However, for the first time, this latest round of fighting has raised fears of the eruption of an all-out war.

The conflict has its origins in the early 20th century. The present conflict began in 1988 and then escalated into a sub-regional war in the early 1990s.

It all started with Joseph Stalin's decision to make the Nagorno-Karabakh region an autonomous territory within Soviet Azerbaijan. Subsequently, the Karabakh Armenians demanded that Karabakh be transferred from Soviet Azerbaijan to Soviet Armenia. This did not take place.

The modern phase of the conflict began in February 1988 and exacerbated after 1989 with the final dissolution of the Soviet Union (USSR). The deteriorating situation persuaded Turkey to request the Organisation of Islamic Cooperation (OIC) and Saudi Arabia to step in and try to bring forth a cease fire to assist the Muslim majority State of Azerbaijan. OIC's efforts eventually led to the signing of an internationally-brokered ceasefire in 1994 and this provided for two decades of relative stability.

It may be noted that ethnic tensions between Christian majority Armenians and Azerbaijanis have particularly increased in this region since 2017. Public opinion on both sides has assumed increasingly entrenched, bellicose and uncompromising dimensions. Analysts have noted that mutual concessions that might have helped to lower tensions (that have been threatening internal stability) have unfortunately not taken place. Some have suggested that the incentive for compromise has been missing partially because of the ruling elites on both sides.

It would be pertinent at this point to refer to the evolving dimensions- both political and economic in the South Caucasus region. Many outsiders are taking the view that the thawing of the frozen conflict in Nagorno-Karabakh is a new chapter in the age-old proxy war between Moscow and Ankara in the Caucasus. Yet, upon closer examination, it appears that both sides are using this renewed conflict to work together to exert influence in the region while excluding Western powers.

Since 2019, Turkish-Russian relations have been amicable enough for the two countries to sign a military cooperation agreement paving the way for Ankara to purchase Russian-made surface-to-air missiles. Both Russia and Turkey have taken advantage of several developments in the past couple of years to increase their cooperation, especially in the sub-region of South Caucasus.

Consequently, the increased isolationism of US foreign policy and a lack of interest by European countries in the region, coupled with the global COVID-19 pandemic has shifted the attention of most countries towards domestic public health concerns. This has provided an opportunity for Russia and Turkey to "hijack" the Nagorno-Karabakh dossier from the Minsk Process and convert it into a regional endeavour.

The implications of shifting the Nagorno-Karabakh conflict from the multilateral OSCE Minsk Group's framework to a Russian-Turkish regional one -- with a possible Iranian role -- might have major and lasting consequences. In this context, Russia's continued "wait and see" approach might pay off when both Armenia and Azerbaijan find themselves in a military impasse, even if both sides claim some variation of "victory".

There is now a possibility that Russia will utilise its various levers against both Armenia and Azerbaijan to ensure that they accept Russian peacekeepers being deployed on the Line of Contact between the two conflict-prone countries. Turkey will also have its own perspective. They will claim diplomatic victory and also more importantly, the strengthening of Turkey's "mentorship" over Azerbaijan.

Despite the UN Security Council's call on September 29 for containing the conflict and continuing its mediation within the OSCE framework, it has now become obvious that the Minsk Process is no longer a viable option for the actors involved in the conflict - especially Azerbaijan.

Strategic analysts have accordingly mentioned that the possible shift of this conflict from a multilateral framework (OSCE Minsk Group) to a regional one (Russian-Turkish-Iranian) is indicative that both Russia and Turkey do not consider the West a relevant player in their backyard. Whether by choice or by accidental convergence, the two regional powers are ready to define and implement their own security strategies in the South Caucasus bilaterally, with only minor objections from the West.

It also needs to be noted that Turkey's active participation in the conflict in a region that Russia considers to be its backyard can be viewed within the prism of Moscow and Ankara's gravitation towards a synergy on several foreign policy fronts.

This has drawn European attention, particularly of France. As a result, even though Turkey and Russia stand on opposite sides in the Syrian and Libyan civil wars, they have both discovered some common grounds in their mutual distancing from Western political and even military (NATO in the case of Turkey- a member of NATO) paradigms. This gravitational change is also being explained as Moscow's attempt to revive the Primakov Doctrine (named after former Russian Prime Minister Yevgeny Primakov), which speculates that Russia should form regional alliances to resist the global hegemony of the US.

As a result many outsiders including some countries in the Middle East are now taking the view that the thawing of the frozen conflict in Nagorno-Karabakh has unveiled a new chapter in the long-drawn confrontational views between Moscow and Ankara in the Caucasus. It appears that both sides are now going to work together and exert influence in the region while excluding Western powers-- particularly the USA.

However, there is still one factor which will continue to create ripples within this matrix. Defence analysts have drawn attention to the fact that Russia till now has been Armenia's main arms supplier and the two countries are military allies. Russia also extensively sells arms to Azerbaijan. The paradox that remains is that Armenia buys Russian weaponry at a discount, while Azerbaijan pays the full price. One can only hope that all the concerned parties will now take effective action to create a plain playing field.

Muhammad Zamir, a former Ambassador, is an analyst specialised in foreign affairs, right to information and good governance.