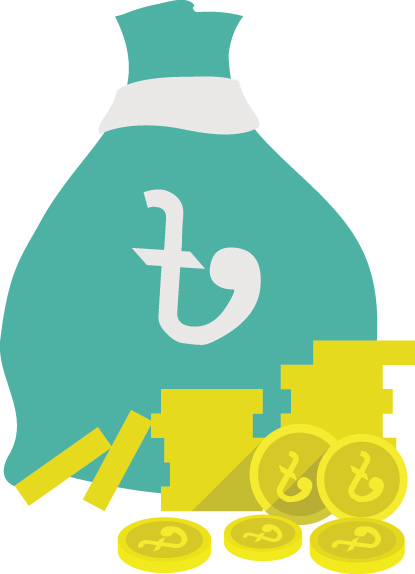 On a trip to a local pizza store just before the Covid-19 lockdown, one of us got an electric shock upon realising that a pizza whose menu price was Tk 670 was finally billed at Tk 915. Despite being an economist, such a huge difference in the before and after billing was a bit hard to fathom.

Before going further into this issue, it may be useful to discuss why VAT is popular, both administratively and economically, in many countries, without attempting comprehensiveness. Suppose I own a firm that buys Tk 50 of inputs, adds Tk 25 of labour and sells the output for Tk 100. Which of these three numbers, or some combination of them, should the government use to raise taxes? If the government taxes Tk 50 or Tk 25, then I am being taxed for prices set by others, which not only sounds unfair but affects efficiency. If say, labour is the basis for VAT, then I will want to replace labour with other inputs. If applied strictly to the machinery imports of ready-made garments (RMGs), this principle can stop automation! The danger is that we may lose the market for RMGs in the process.

What if we use the total costs of Tk 75? In this case, someone whose business only allows him sales of Tk 90 will be taxed as much as me. And those whose sales are Tk 80, will be bankrupt-not really desirable. If sales are used, then we can use the previous reasoning in reverse sequence; a firm whose costs are Tk 90 will pay as much as me, and soon seek to exit. However, if taxes are based on revenues minus costs, or value added, then this is clearly a tax based on my contribution, which is Tk 25 in this case. Why then did VAT come into usage so late? Because it requires more refined administration since it has to be based on both revenues and costs. Only with electronic data recording does it become at all practicable.

Informal sectors, which do not record revenues and costs, such as our neighbourhood samosa stand, escape VAT altogether. In countries like Bangladesh, where such informal businesses form over 80.0 per cent of firms, the reach of VAT is clearly limited. Furthermore, the logic of record keeping tells us that those firms which do keep electronic records, such as franchises or upper-end firms, will be more under the eye of the tax authority -- hence under more pressure to pass on their costs.

The discussion above raises two important issues. First, a VAT should be imposed on value added part of the good, which consists of the labour and capital that the pizza store added to make the pizza. Instead, we pay the VAT on the final product. Since the VAT differs across commodities, VAT enables the Government of Bangladesh (GoB) to raise taxes by making those who consume more, pay more. So far so good. But this logic can only apply if the consumers can choose based on the prices they will actually pay. A sensible economic policy, VAT, is being brought into disrepute by having the name without the reality. Secondly, we pay VAT, not on the menu price, which is Tk 670, but rather the VAT is levied on a higher amount (Tk 737) because of the supplementary duty. In fact, if the VAT were raised to 25.0 per cent and levied on the menu price of a pizza, the final price of the pizza would still be lower than Tk 915.

The 10.0 per cent service charge that restaurants add on the bill effectively charges customers for paying their VAT. Notice that retailers add service charge separately but not as a cost of making the food. Otherwise, that would increase the menu price of the food (Tk 737 instead of Tk 670). So, customers, in general, pay almost double VAT (15.0 per cent VAT plus 10.0 per cent levied by the retailers). This might be one reason why restaurants are popping up in Dhaka and elsewhere as the tax burden is borne by diners and taxpayers.

Under the current practice of tax-exclusive pricing, the menu price of a product is always less than its final price. So, when ordering or buying a product, consumers suffer from 'money illusion' in the sense that they misconceive the real cost of the product they are buying. Research in consumer psychology has shown that even when aware of the surcharges, consumers tend to ignore surcharges. This is because consumers often process information in the same manner in which it was framed or presented to them. When restaurants and shops present price components separately, consumers may not combine price components mathematically and end up ignoring surcharges.

Various economic analyses of behaviour show that consumers systematically undervalue the cost of hidden taxes and, as a result, tend to over-consume. Overconsumption leads to decreased savings, overworked individuals, and increased amounts of debts or cuts in the consumption of other desired products. It negates a major motive for the VAT, which is increased savings (and investment).

Millions of consumers worldwide are suffering from economic harm every day from the undervaluation of hidden taxes. Members of European Union (EU) require that businesses must present total price (including taxes and additional surcharges) on the price tag. The same also applies to online shopping. In fact, in 2016, Airbnb was penalised euros 0.6 million by the European Commission for not displaying all-inclusive prices for accommodation. Under tax-inclusive pricing, the menu price of the pizza we discussed would have to rise by 36.57 per cent to ensure it ended up with the same amount after the VAT. Retailers may not like this outcome and such a step may be costly for government in the short run.

However, American economist Raj Chetty shows that consumers like this outcome because in the end, they are better off as a result of making their decisions on the basis of the tax-inclusive price rather than tax-exclusive price. This is simply because consumers will make more rational spending decisions if they face the "full" (tax-included) price at the time when they order or buy a product, rather than when they pay the bill. The idea behind tax-inclusive pricing is to help consumers see a tax before they make a purchase. After all, to do the right calculation, we need to know the right prices.

In Bangladesh, where consumption is 70.0 per cent of Gross Domestic Product (GDP), consumers should be given as much information relevant to their purchasing decisions. From a consumer welfare perspective, there is not a single argument to support tax-exclusive pricing. Rather, tax-exclusive pricing subsidises financial illiteracy in the form of undervaluation and the resulting over-consumption. It also leads to a flawed legal framework injuring consumers daily. The economic harm for each individual purchase might be relatively small, but the aggregate impact on consumers may be monumental.