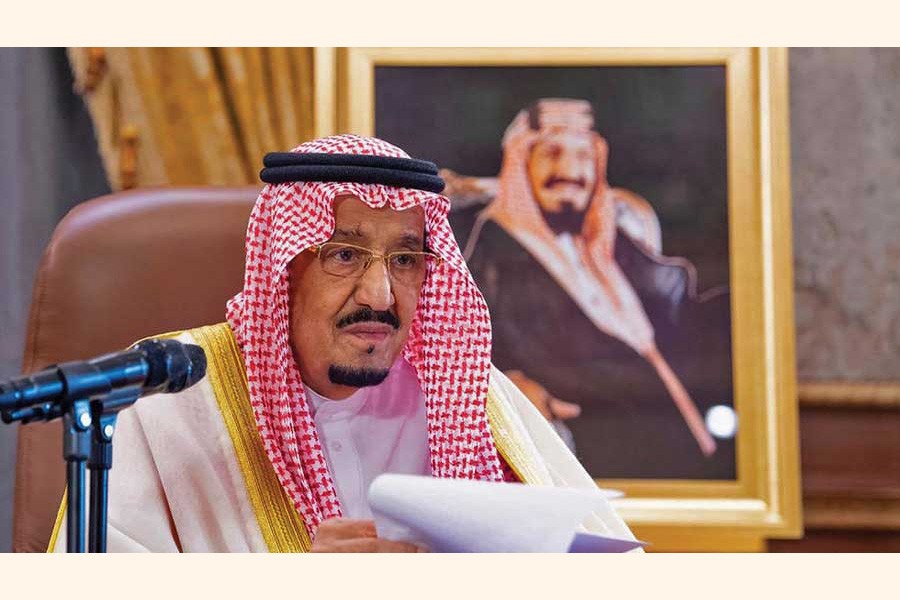 A handout picture provided by the Saudi Royal Palace on March 19, 2020 in the capital Riyadh shows Saudi King Salman bin Abdulaziz: The Saudi King will chair an emergency virtual summit of leaders from the Group of 20 major economies today, March 26 to discuss a global response to the COVID-19 pandemic. —Photo: AFP

The economic impact of the COVID-19 pandemic is hard to predict as events are still unfolding, and estimates vary dramatically. UNCTAD estimates lost output in the order of US$1.0 trillion, just over a third of Bloomberg's expectation of US$2.7 trillion in losses. The OECD (Organisation for Economic Cooperation and Development) expects global economic growth to halve from already anaemic levels.

Dire consequences for achieving the already failing Agenda 2030 for the Sustainable Development Goals (SDGs) are inevitable. Developing countries are particularly vulnerable, with meagre resources available for the new threat and its consequences.

As resources are urgently needed to cope with the pandemic, their ability to spend on other development priorities will be even more constrained. As with previous economic and health crises, poor and vulnerable sections of the population will be worse affected.

Ahead of the forthcoming G20 leaders' virtual emergency meeting, the UN Secretary-General warned that current national responses to the coronavirus pandemic "will not address the global scale and complexity of the crisis".

Millions could die without a more "coordinated global response, including helping countries that are less prepared to tackle the crisis", as "global solidarity is not only a moral imperative, it is in everyone's interests".

IMPACT ON DEVELOPING COUNTRIES: Besides the direct socio-economic impacts of the COVID-19 crisis, the pandemic will affect developing countries otherwise via: global value chain and tourism disruptions, falling commodity prices and foreign direct investment, as well as the consequences of capital flight and a stronger dollar.

Analysts project reduced investments in global value chains, energy, mining, and other sectors, as well as falling travel and tourism in African countries due to reduced Chinese demand for raw materials as its economy slows further. Sub-Saharan Africa is also expected to lose up to US$34 billion in export revenue due to reduced global demand, especially collapsing oil prices.

Commodity prices have already fallen sharply, and exporters expect more problems due to falling demand as the global economy slows. Heavily indebted developing countries are in a particularly difficult situation as their exports decline with falling global demand, and import and debt service costs rise due to weaker currencies as money flees to 'safe havens'.

The Institute for International Finance (IIF) estimates that around US$67.45 billion has flowed out of emerging countries since late January, an amount larger than emerging market capital outflows in the aftermath of the 2008-2009 global financial crisis and the 1997-1998 Asian financial crisis.

IMPACTS ON WORKING PEOPLE: A new International Labour Office (ILO) report projects almost 25 million jobs could be lost worldwide, and workers could lose some US$3.4 trillion in income by year's end.

Lockdowns will disproportionately hurt low-income households, casual workers and the poor, especially where social protection is grossly inadequate. Many lack the means to stockpile food or seek medical treatment.

Studies of 11 sub-Saharan African, South and Southeast Asian countries found that without universal health coverage, poor people respond to health shocks with impoverishing 'distress sales' of their limited assets and by taking on more usurious debt.

Urban slums and refugee camps can become virus hotspots. For the world's more than 65 million displaced people, who have fled war and persecution, and live precariously, the risks posed by the pandemic are dire.

By disrupting economic activity and cutting incomes, the pandemic is a new cause of impoverishment, besides limiting the ability of vulnerable households to escape from - and stay out of - poverty.

SUPPORT MEASURES LACK COORDINATION: As of March 09, 2020, 'donors' (including governments, multilateral organisations and private funders) had pledged or given an estimated US$8.3 billion - directly to countries and to the World Health Organisation (WHO) - for COVID-19 responses.

This included US$15 million from the UN's Central Emergency Response Fund to help vulnerable countries, not very much as the organisation struggles with its own persistent underfunding.

Meanwhile, the World Bank announced US$12 billion in immediate support, while the International Monetary Fund (IMF) made available about US$50 billion in emergency financing for low income and emerging market countries, and "stands ready" to use its US$1.0 trillion lending capacity to help countries coping with the pandemic.

The Bill & Melinda Gates Foundation and the Wellcome Trust have set up a US$125 million coronavirus drug fund, while Michael Bloomberg's US$40 million plan seeks to stem the coronavirus spread in developing countries. Philanthropic support is typically oblivious of national development priorities, and may 'distort' public health or social protection.

These funds are inadequate, given the scale and complexity of the problem, especially as an early end to the pandemic remains highly unlikely. Different modes of pandemic control need to be considered to minimise the scale of disruption and threat.

Crucially, multilateral coordination remains seriously lacking beyond the valiant efforts of the WHO in the face of persistent criticisms and its own financing problems. The UN should show how slow progress on the SDGs has made us all much more vulnerable to the pandemic and its various consequences.

It will be important for the UN to play a stronger coordinating and leadership role, e.g., with the UN Sustainable Development Group (UNSDG) rapidly assessing the adverse impacts and funding needs of the COVID-19 pandemic in relation to Agenda 20.