Support essential imports at any cost 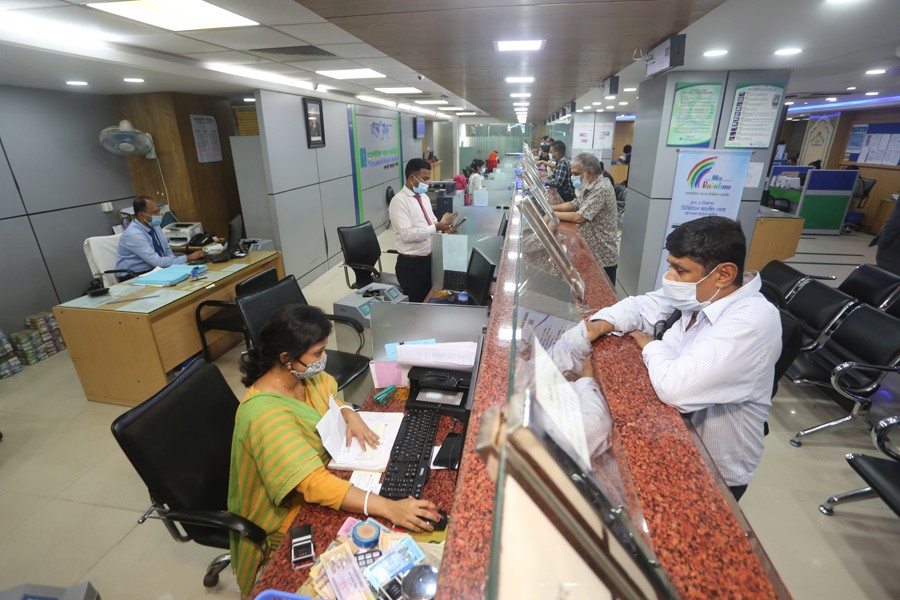 An inside view of a bank in Dhaka. Banks are facing dollar crisis that force them to restrict opening the letter of credits for imports. —FE Photo

The global economy is still in turmoil. High inflation and strong US dollars continue to bite most countries, including ours. Bangladesh is indeed a victim of a global economic crisis precipitated by the prolonged disruptions of supply chains due to persistent fallouts of covid-19 and back-to-back impacts of the war in Ukraine, leading to the sudden price hikes of commodities that are imported, including essential food items, fertilisers, and fuel supplies. All this led to rising inflation in Bangladesh, which was also essentially cost-pushed.

The liquidity glut that the western central banks created, particularly by the Fed, since the global financial crisis in 2008-09 and further accentuated during the Covid period fueled inflation throughout the world, which had to be addressed by tightening the monetary policy. The Fed raised its policy rate at least six times during this year. Other central banks had to follow its lead as well. Although the hike of policy rates by the Fed and other western central banks may witness a pause in the coming days, the damage has already been done in developing countries. This unusual tightening of monetary policy improved returns from the US long-term bonds, and US dollars rushed back to the US from developing countries. The US dollar value appreciated substantially against all other currencies, including Bangladesh's Taka. This further fueled imported inflation in most countries. However, the impact was more severe in Bangladesh as Taka depreciated by twenty-five percent just in a few months. Bangladesh's response to external market challenges was hesitant as it took time to quickly go for a market-based exchange rate. Even today, there is no single exchange rate of Taka against the US dollar nor a well-developed inter-bank foreign exchange market with such a benchmarked rate for reference to investors from home and abroad. Various complications persist due to this hesitant foreign exchange policy with more than one exchange rate.

Given this brief perspective, let's look at the snapshots of various elements of Bangladesh's external economy:

THE SITUATION DURING THE FISCAL YEAR 2022:

- Wage remittances of $21 billion could not support this huge trade deficit. The current account balance was in the negative territory of $18.70 billion, leading to a bulging overall balance of payment deficit.

- Around 15 per cent is commercial import

- The remainder is intermediate goods, industrial goods, and capital goods.

- Bangladesh achieved significant development in import substitution industries during the last two decades, particularly since 2009. Indeed, local companies are emerging as a vital source of economic power for Bangladesh, going beyond exports and remittances.

- Industries continued to depend on supplier credit extended by suppliers, which was. Of course, costly.

- Bangladesh Bank introduced buyer's credit in early 2012. This was based on an 'all-in-cost' ceiling.

- Global banks focused on Bangladesh with funding exposure as a trade hub. This has been well reflected through the operations of 9 foreign banks and 11 repo offices, including JP Morgan, Mashreq, Commerz, DBS, Habib etc.

Import substitution industries helped Bangladesh to reduce imports. Otherwise, the import cost in FY2022 would have been more than $130 billion. Indeed, 'Made in Bangladesh' focused on a vibrant domestic economy catering to the internal market and provided Bangladesh extra strength to respond to the global economic crisis, including the latest one. The 'out of box' investment support for agriculture and local manufacturing sectors, including MSMEs, proved to be highly strategic for Bangladesh in terms of not only a higher level of food production but also a higher level of the consumers' capabilities to buy that food with enhanced purchasing power provided through widespread formal employment and higher rural wages. As a result, despite the widespread threat of global hunger, Bangladesh is well protected from famine and starvation. Besides this year's bumper Aman paddy production, Bangladesh has diversified its agriculture to maintain stability in food security. It has taken precautionary moves to expand food security through more production and necessary social protection measures, particularly in the urban areas where more people are involved in the informal economy. Indeed, modern and diversified agriculture has proven to be a savior for Bangladesh during the ongoing global economic crisis.

- Bangladesh Bank took different measures such as encashment of export proceeds by the following day, repatriation of export proceeds through the designated bank, encashment of export retention quota (ERQ) balance at 50 percent with reduction of retention limit by half, usance import period enhanced to 360 days from 180 days, enhancement of interest rate on FC accounts, placement of FC fund from offshore banking to primary operations and last but not the least monitoring of large imports beyond $3 million.

- Some observers are, however, skeptical of the fact that if the policy tools employed by Bangladesh Bank actually worked or created a panic in the market, resulting in an adverse reaction.

- Bangladesh inflows are insensitive to Taka depreciation as there has been some space for speculation around the multiple exchange rates.

- Depreciation of the Taka did not play an essential role in enhancing export either.

- Recession in the West may have led to the slowdown of export earnings.

- Exchange rate returned to a fixed regime with fixation through bankers' associations. Earlier, it used to be managed float by the central bank.

- Two rates were set - one for wage remittances and one for all other inward remittances, including export proceeds

- The rate set for wage remittances is reportedly not working fully since the remittance trend of the last two months has not been that encouraging. The difference between the formal and informal rates has been significantly higher than what it used to be. This further encouraged informal remittances in recent days.

- Bangladesh's economy is highly dependent on import for essential consumption items and raw materials and intermediate goods for its vibrant manufacturing units.

- Banks are found reluctant to execute import transactions on different excuses, such as liquidity problems, instructions from Bangladesh Bank, etc., apparently due to a short supply of foreign exchanges

- Continuing this trend may result in collateral damage to the country as payments against some LCs may face default risks. Already some international banks are raising red flags against some of our banks with rising non-payment obligations.

- The present problem is that the market appears illiquid to some extent. The interbank foreign exchange market is nearly dry. Banks are not interested in buying US dollars at higher prices from exchange houses and selling at a lower rate within the framework of the weighted average rate. Many multi-national corporations and airlines are taking advantage of the lower rate due to this arbitrary system of weighted average.

- No policy support may solve this problem unless autonomous liquidity is injected into the inter-bank foreign exchange market and returned to a single exchange rate.

WHAT TO DO NEXT:

- Import of essential items must continue at any cost without creating panic. The market must not be scared due to overzealous monitoring at a time of volatility in foreign exchange market.

- It is expected that the market will ease by mid-January or early February. So, necessary liquidity support needs to be extended to themarket from Bangladesh Bank either through outright sales of the greenback or in the form of an OD line or swap arrangement. The private banks facing the pressure of foreign exchange shortages also deserve such support for essential imports from the central bank.

- A separate window of foreign exchange support for these banks may also be opened for the next couple of months if needed.

- Wage remittances, the exchange rate of which is now higher than that of exports, should be used only for non-priority import payments and service payments without taking it into the fund pool for making a weighted average rate as practiced now.

- All import payments need to be settled on time and religiously to avoid increases in cost like confirmation charges, financing cost

- NRBs should be allowed to maintain non-resident convertible Taka accounts in Bangladesh, with repatriation facilities, if needed.

- The panic situation, if any, needs to be removed through mass communication, putting positive signals without unnecessary 'policing' activities. It is the right time to facilitate the small and medium enterprises that may be struggling with the execution of LCs in some private banks.

1. Ongoing discussions on concessional long-term borrowings from multilateral are very timely and prudent to remain comfortable. This must continue.

2. Export diversification is much needed. In the RMG sector, non-conventional markets are to be explored as work on upskilling workers to focus on high-end buyers may continue. Also, focus on non-RMG exports like light engineering, electronics, cars, etc.

4. Focus on bringing short-term FC liquidity into the market. As OBU to DBU fund placement was recently allowed, it's an opportunity to get short-term FCY liquidity to banks, easing demand.

5. Encourage all banks to work closely with various stakeholders (BB, BIDA, BEPZA, BEZA, BHTPA, BSEC, and chambers) to focus on bringing FDI and Foreign Portfolio Investments into Bangladesh. As a forward-looking approach, this will be a perfect time as there will be much interest in investments from various markets to an emerging market like Bangladesh. All our economic indicators are beautiful compared to many other countries. Our track record of overseas debt payments is excellent. S&P and other rating agencies have kept our rating unchanged. For the way forward, there will be a massive chance of upgrading Bangladesh. Indeed, Bangladesh's debt situation is not comparable to Sri Lanka's. The Foreign Debt to GDP ratio is not even a fifth of that of Sri Lanka. So why do we worry so much about this issue?

6. As FX gradually moves into dynamic and market-based, the interbank market will see more liquidity. It is critical to have a transparent benchmark rate and move towards a market demand-supply-based floating rate, which can be seen by all stakeholders internally and internationally. This is very important to comfort global investors, banks, and counterparties.

7. Wage earners' remittances will continue to remain very important for Bangladesh. As FX rates gradually move based on the inter-bank market, a long-term plan to attract remittances is needed. A point card tagged to NID for wage earners can be considered for a universal pension scheme for children's education, health, etc. There must be a long-term, attractive tie-up arrangement with wage earners who can use the official channels to transfer funds.

8. Increasing supply to private sector banks during the next three months for actual commodity payments of private sector LCs to around $500 million per month may be warranted. It will encourage banks to quote in the market since they will have confidence in central banks' support when required.

9. To ease the pressure on cash USD, Bangladesh Bank should work with appropriate regulatory authorities to allow the importation of cash notes by authorised dealer banks.

10. Finally, the trust deficit created by the gossip mongers and ill-motivated media, including social media, must be countered with cool-headed well-informed credible messages from the central bank to improve the overall business environment.