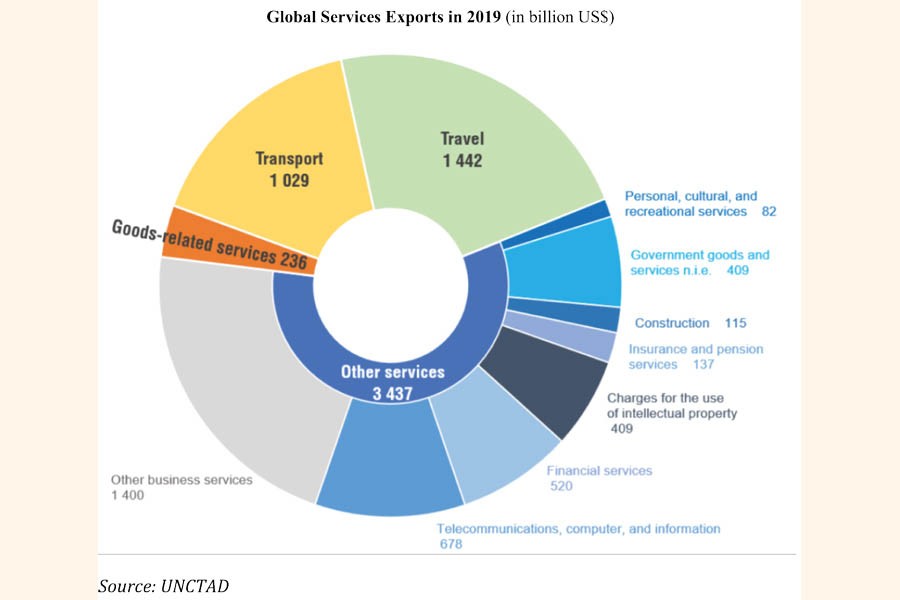 As the world prepares for the post-pandemic era, the quest for sustainable economic growth is becoming ever more intense - especially for developing countries. It is tempting to call for these countries - the main engine of global growth in recent decades - to shift their development strategies from industrialisation to services. As new technologies increasingly allow services to be produced and traded just like goods, some economists even suggest that low-income economies should skip the manufacturing stage of development altogether and go directly from traditional agriculture to the new "growth escalator" of services.

The belief that services represent the new holy grail for developing countries stems in part from empirical studies showing that trade in services has increased faster than trade in manufactured goods since 2000, and in particular since 2011. The disruption of global value chains caused by Covid-19 has only reinforced this belief.

Moreover, new technologies such as 5G networks and cloud computing are fragmenting service processes and opening up new possibilities to outsource high-wage and costly activities. These trends are driving a so-called "third unbundling," whereby some previously non-tradable services become tradable. With the world's largest economies engaged in tariff wars and global trade declining sharply, many regard services as the most appropriate growth and employment engine, because they can be digitised and are less susceptible to customs and other logistical barriers.

But this blind faith in services-led growth is a dangerous illusion, and the arguments supporting it are deeply flawed.

For starters, the downward trend in the global trade-to-GDP ratio over the past decade should be put in perspective: a study by Giovanni Federico and Antonio Tena-Junguito shows that although world trade since 1800 has often suffered temporary retreats, the fundamental and consistent trend is upward. Trade and globalisation have on balance made the world much wealthier, and will remain the most reliable routes to global prosperity and peace.

Second, manufacturing - not services - remains the primary driver of global growth. True, high-tech innovation is blurring the lines between physical and new digital production systems, and also changing the conventional boundaries between agriculture, industry, and services. For example, new developments in information and communications technology (ICT) are allowing traditional farmers around the world to connect to global value chains in agro-industrial production and services.

But these changes do not alter the fact that industrialisation is still paramount in the quest for economic prosperity. The digital revolution is mainly opening up new opportunities to accelerate innovation and boost the value-added content of manufacturing output. A recent report by the United Nations Industrial Development Organization (UNIDO) shows that value added in world manufacturing averaged 3.10 per cent annual growth between 1991 and 2018, slightly higher than the average GDP growth rate of 2.80 per cent. As a result, manufacturing's contribution to world GDP growth increased from 15.20 per cent in 1990 to 16.40 per cent in 2018.

Third, the current value of global trade in services is only one-third that of manufactured goods, even though services account for 75.0 per cent of GDP and 80.0 per cent of employment in OECD countries. Advanced economies' greater share of employment in tradeable services is simply a logical step in the process of industrial upgrading and structural transformation, and also reflects their comparative advantage in being near the technological frontier and relying mainly on relatively high-skilled labor and financial capital.

By contrast, developing countries' comparative advantage is low-cost labor, and they should not seek to mimic the services-led growth strategy in vogue in advanced economies without having the skills base to sustain it. Policymakers from Bolivia to Burundi to Bhutan would be ill-advised to try to emulate Switzerland's services-led growth simply because they also are landlocked countries.

Moreover, the claim that industrialisation will create fewer job opportunities than in the past because robots are increasingly replacing human labour remains conjectural. Although automation will eliminate a large number of jobs, it will also likely create new industries and jobs in more skilled activities. Once we consider indirect effects along the value chain, the increase in the stock of robots used in global manufacturing is actually creating employment, not destroying it. Moreover, in situations where technological progress and the proliferation of artificial intelligence (AI) lead to unemployment and worsen inequality, sound public policies (such as non-distortionary taxation levied to compensate those who otherwise lose their jobs) can counter these negative effects.

Fourth, services' status as the main source of growth in many developing countries (at least according to official national accounting statistics) mainly reflects the failures of industrialisation strategies that were not aligned with these economies' comparative advantages, as well as excessive informalisation in traditional agriculture and relatively unproductive activities. Low-skilled services may help many people to escape extreme poverty, but they are not reliable engines of growth and sustainable economic development.

To be sure, tradeable business services (including ICT services, financial intermediation, insurance, and professional, scientific, technical, and medical services) can provide opportunities for service-based global integration because of the large wage differences across countries. But, again, this will happen only when developing countries improve their human-capital base - a long-term and costly process.

Similarly, the emergence of advanced digital production technologies (including robotics, AI, additive manufacturing, and data analytics) opens up new possibilities in services such as telemedicine and telerobotics. But these activities also require highly skilled workers, and most developing countries' education systems and outcomes unfortunately prevent much of the labor force from competing successfully. Given these constraints, advocating that economies with weak human capital leapfrog industrialisation is a recipe for further informalisation and poverty.

For poorer countries, industrialisation remains the main avenue for successful development. It yields higher productivity growth, and it builds and strengthens the skills and capabilities that countries need to secure a competitive niche in the global economy. New technologies also allow latecomers to build environmentally sustainable manufacturing firms. In short, developing countries should dismiss reports of the demise of manufacturing as the key to future prosperity. High-end services can and must wait.