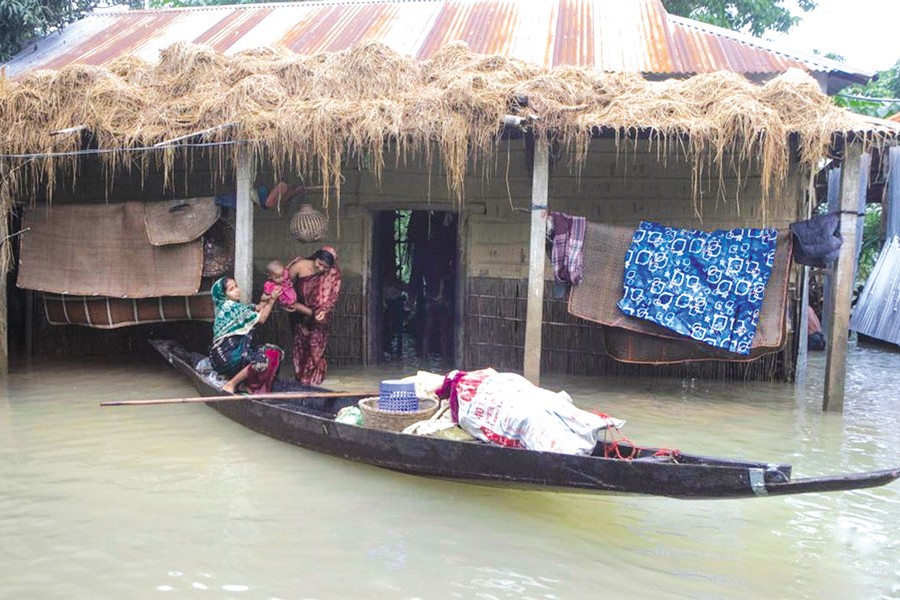 People prepare to move by boat from a flood-affected area to a safe place in Sylhet, Bangladesh, on June 19, 2022. —Xinhua Photo

Since the devastating floods of 1987 and 1988, Bangladesh hasn't seen any great deluge. Those who were born later have little idea about what a massive flood is. The 1974 flood was of a lesser degree, though it swamped vast areas of the country. Except these three floods, the country's rural masses experienced a considerably long gap in their falling victim, helplessly, to the loss of their dwellings, paddy fields and related structures. Few could dare think the return of the days of sufferings and myriad types of miseries inflicted by prolonged floods. However, climate experts hadn't felt being free of the spectre of great floods. They continued to point at the repeated cyclones which had not ceased from striking the land's coastal belt.

The recent flooding of the northern and north-eastern Bangladesh was initially blamed on the onrush of water from the upper riparian rivers into the rivers downstream. It led to the swelling of the rivers in the country's Sylhet and Sunamganj areas. As days wore on, the water from the upstream rivers in northern India began flooding the smaller rivers and water bodies like 'haors' and other water bodies. The situation has lately begun turning worse, prompting people in the flooded areas to desperately search for safer places. And also relief goods; but they are too scanty. Families in areas have been found for a week in a row without solid food. There are few places in the flooded areas to search for strong shelters in the vast northern region. The acute scarcity of food and shelter has started adding to the flood victims' woes. Evidently, the ravages of the worsening flood have begun telling upon the very looks of the affected people. Despite its being a large city, the affected people in the submerged Sylhet and also on the outskirts have few places to go to for seeking help. The situation is no different in the other flood-stricken region --- Sunamganj and its remote villages. In the vast swathes of inundated lands, people are found moving aimlessly. They see few signs of relief goods' distribution. Most of the time those possibilities prove to be illusory. Newer areas have already been included in the flood-hit areas. Outside the greater Sylhet region including also Moulvibazar, a number of far-flung areas emerge as being badly hit. They include the low-lying districts of Netrakona, Mymensingh, Kishorejanj, Habiganj, and Brahmanbaria.

Meanwhile, flood experts come up with grim forecasts. As they can read in advance, Munshiganj and a few nearby places and the lower parts of Dhaka are feared to become vulnerable to flooding. Due to more intense local rains, the already swollen northern rivers have started releasing their excess water into the rivers in central Bangladesh.

Thirty-five long years have passed since the great countrywide flooding hit the country. In the interregnum of three decades, several anti-flood or flood mitigation measures had been expected to be in place. Nakedly characteristic of the nation's culture, hardly any tangible step had been taken to protect the flood-prone areas. The stark reality is, due to the floods being seemingly on the wane, the responsible quarters were found adopting a resigned stance. What followed as a result was the sham belief that the country had managed to come out of the spell of flooding.

The startling aspect of the whole episode is the general people's oversight of the over 700 rivers and their branches accumulating sediments from upstream rivers. The locally generated garbage has only contributed to the fast accumulation of the piling up of industrial and household refuse. To add to the rivers' woes, the relevant authorities remained oblivious to a mandatory duty of theirs: the rivers' timely dredging. To speak plainly, a large percentage of the country's big and small rivers have been in need of urgent dredging work. Apart from waste dumping into the rivers, mindless sand lifting also leads to the rivers' haphazard filling resulting in the change in their courses. These human interventions invite untimely flooding, like those occurring amid pre-monsoon rains. The nearly 2-month-long floods have this year played havoc with paddy fields in the country's north and northeast. It's well known from where the excessive water flowed into the rivers of Bangladesh. It has been an age-old phenomenon in northern part of the country. A great relief, however, stemmed from the fact that in the past couple of decades, the major rivers of Bangladesh remained free of the water flows in excess from across the border. Nature doesn't remain oblivious to age-old adages. It is unpredictability in the main which defines human destiny. The unexpected and sudden rainfall in excess in the northeastern India emerges as a living proof of this universal truth. Moreover, as days wore on, driving pre-monsoon and full monsoon rains in northern India's Meghalaya and Assam, took a debilitating form, and jeopardised life there. As has been seen through the ages, the water runoff flowed into Bangladesh through the trans-boundary Jamuna River. According to flood forecasts made by experts, this year's flood fury may not spare the low-lying parts of the areas near the flood epicenters in the future. In preparing this forecast, they said the fear of medium to heavy rains in Bangladesh stemmed from similar downpours feared to affect the Indian states of Assam, Meghalaya, Tripura, and West Bengal. Moreover, the water levels of the Brahmaputra, the Jamuna, the Ganges-Padma, the Dharla, the Dudhkumar and other major rivers may continue to rise in certain periods every year.

The Bangladesh flood situation, also blamed on climate change impact, has been called by some river experts a result of human derring-do and self-deceptive ignorance. On the other hand, in Europe, the Americas, especially its northern part, and the eastern and south-eastern Asia, the other continents and the island territories, it is global warming which is triggering regular floods. The West Asian, the North African and the Gulf regions are predicted to remain flood-free for decades to come. The times of the floods of Biblical periods appear to be over for now. In the pre-Christ eras, the strikes of natural disasters, especially the centuries-old deluges, would be regarded as consequences of aberrant human behaviours. Some would like to interpret these apocalyptic occurrences as the expressions of nature's wrath. Men of those times learnt to remain appeased with these interpretations of the riddles of nature. The ever-questioning European Renaissance vanguards had posed a threat to the submissive acceptance of these impulsive truths. They kept delving into the core of nature's mystery. After nature's invincibility and many of its rules' inviolability were proved beyond doubt, humans turned to the transcendental revelations of nature. The 20th and 21st centuries' radical discoveries relating to the changing behaviours of nature shaped by human misadventures and follies and their grim impacts on human destiny are expected to create a new definition of man's place on Earth. It's solely up to them whether they will respect nature's sacrosanct laws or rebel against it. Mankind has started watching the consequences of the foolish rebellion against nature only recently. Evidently, many of these rebellious acts have gone wrong awfully. Nobody knows for how long mankind has to pay the prices in order to make amends for its tampering with the pristine atmosphere of Earth. Maybe, the desperate colloquiums held to work out ways to mitigate the impacts of climate change on man are just a beginning. More such meets are required. Even the poorer South Asian countries like Bangladesh do not want to be wiped out unnoticed and unsung.