In love with 'adda': Delight and dread 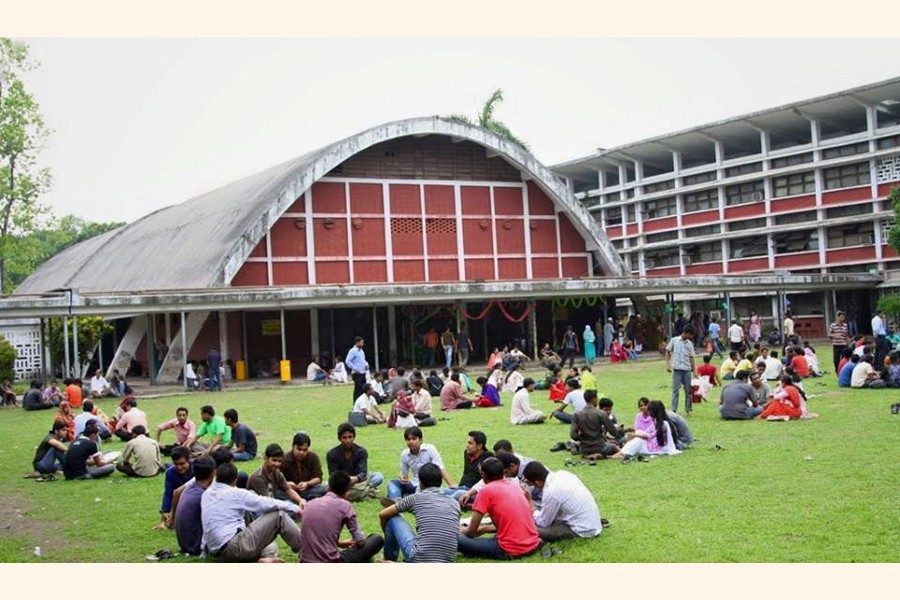 Befitting the constantly transforming trends of time, the nature of man-to-man interactions also undergoes changes. These rapports come in many forms, suiting to the vogues in place at certain periods. One might feel tempted at this point to focus on the Bengalee 'addas' or gossip sessions. By nature, Bengalees through ages have demonstrated their untamable passion for 'adda'. The British colonial rulers of the past defined the love for idle gossiping found among the people of this land the expression of a national trait. This feature is said to have stemmed from the general people's apathy towards punctuality. As the colonial rulers have found hundred years ago, the Bengalees are loath to keep time. Whenever there is an opportunity, they do not hesitate to shirk responsibilities. To them all urgent works prove inane when compared with a heated 'adda'.

Almost all the small and large nationalities in the South Asian sub-continent show equal fascination for the languid gossip sessions. But for Bengalees, no recreation could be more sought-after like a long, undisturbed 'adda'. Unlike in the Western world's mostly pub-based blabbering, Bengalees start gossiping at any convenient place. The places range from the house-front low stairs, far-away grassy grounds and river-banks to open roofs. During the rains, the 'addas' are found being shifted to the 'boithok khana' or today's well furnished living rooms of the affluent people.

Since the dawn of the 20th century, these gossip sessions have been found mostly confined to restaurants, and even street-side tea corners. The venues of 'adda' used to vary in accordance with the professions of the persons concerned. The writers would be found gathering informally at the offices of the literary journals. In place since the times of Rabindranath Tagore, the tradition reached its zenith in the 1930s. The periodical-based 'addas' gave rise to different identities of writers known as 'Kallol Group', 'Porichoy Group', 'Saugat Group' etc. Those writers would chiefly contribute to their 'own' magazines. Many journals barred their authors from contributing to other papers. Lots of Post-Tagore authors have emerged from these 'addas'. They include Kazi Nazrul, Buddhadev Bose, Premendra Mitra, Manik Bandyopaddhyay, Shoilojaranjan and many others.

In the post-partition period after 1947, the counterparts of Kolkata-based 'addas' began attracting the younger East Bengal writers. The 'Saugat' editor Mohammad Nasiruddin is unanimously recognised as pioneer of these gossip sessions. The Saugat-based 'adda' has, however, stood out with its serious literary sessions. They featured readings of self-composed literary pieces by the authors. This part used to be followed by discussions on them by noted critics. This very feature has distinguished the 'adda' from the relaxed ones which would also have senior and the then younger poets and story writers as participants. Conforming to the definition of classic gossip sessions, these indoor assemblages were purely informal. Both authors and readers were welcomed to these sessions. The popular of these 'addas' included those of Beauty Boarding, Rex restaurant and many roadside tea-corners in the older part of Dhaka. In independent Bangladesh in the 1970s, Sharif Mia's Canteen on the Dhaka University Arts Building campus became the most vibrant haunt of Dhaka's younger writers.

Dhaka now has few 'addas' with the participation of talented and promising poets and prose writers. The strong passion for meeting other contemporaries and exchanging ideas with them, engagement in debates as well as in pure small talks appears to be dying out. Few of the authors now realise that no creative productions materialise without regular exchange of ideas. The very concept that to engage in creativity, one has to become lonely and remain detached from the people around them and the surrounding realities has long been proved untrue. Jibanananda Das, considered the loneliest of the modern Bengali poets, also used to enjoy the company of a few selected poet-friends. They also had their own 'addas'. Those remained vibrant with lively conversations, humour and hearty laughter.

A similar trend of participating in gossip sessions has all along been prevalent among the country's painters. It was, however, pioneered by the art salons of the 19th century Paris. Those used to be held at the residences of the affluent and socially recognised French ladies. The entrée to those exclusive gatherings remained limited. Many artists of the time developed strong disliking for these snobbery-filled sessions. In the 21st century Bangladesh or any other South Asian countries, artists gather at informal assemblages. They are normally centred round a well-known art gallery, studios, a bachelor painter's residence or a humble restaurant. Few professionals can remain completely aloof from 'addas'. Even common folks like elderly retirees are seen gather at some open-air points in the afternoon daily. Against the backdrop of the fast squeezing space in urban Dhaka, the senior citizens find the nearby parks as ideal venues for their pastime gossiping. These meets also fall under the category of 'adda', although the term applies aptly to the get-togethers involving young people in the main.

As per the dictates of the times, 'addas' nowadays are not plagued by gender segregations. The period is long gone when young males and females would sit at two separate corners on the same spacious lawn of a university. If one happens to visit the TSC area on the Dhaka University campus any day, he or she will find dozens of clusters comprising male and female students sitting together engrossed in raucous conversations. Amazingly, these gossip sessions have little space for heated arguments or quarrel. These outdoor sessions stand out with their amiable atmosphere and an undercurrent of friendliness. It has been characteristic of 'addas' since olden times.

The gossip sessions are not limited to society's elite. Like the educated middle class, young office-goers or students engaged in pursuing higher studies, the working class people, too, derive their typical leisure-time pleasure from 'addas'. Commensurate with their lowly upbringing, these gossip sessions often witness outbursts of raw emotion leading to petty physical confrontations. However, all is well that ends well. Even charged situations in these 'addas' finally surrender to the conciliatory interventions of the seniors present there. In short, 'addas' are meant for leisure and recreation. For many joining a lively 'adda' is like having a new lease of life. A lot of others get addicted to these sessions. In our society people are not rare who spend almost all of their youth in endless gossip.

Like all human activities, 'addas' also are constrained by adverse times. On occasions, they also fall on bad times. During pandemics few people can muster the courage to come out of home and start gossiping in the afternoon at a park. In the recent six-month corona shutdown, the whole urban Bangladesh kept itself away from all kinds of 'adda'. It was the prevailing situation which had prompted people to shun these close-proximity sittings. In keeping with the strict corona-time health safety rules, people attached more importance to maintaining physical distance than having a good time at 'addas'. Be the venue the interior of a home or a nearby vacant lot, the pandemic's swoop loomed above every gathering.

After remaining under a veritable prohibition for months in a row, crowds have begun emerging again. So have the 'addas'. This land had such an experience in 1971 --- during the nine months' siege enforced by the occupation army. Assemblies in those nine months were interpreted by the occupation army as meets of planning sabotage. People remained cautious while out. The case of COVID-19 is different and, on many considerations, more dreadful. Like in many countries, it also struck terror into the hearts of people. Yet lots of them began going about their business in careless abandon. Street-corner gossip sessions are back again, with the imperative of physical distance thrown to the wind. What it all means is people of the country aren't going to kick the addiction to gossiping, even if it jeopardises their existence. The whole episode smacks of things purely eerie.