Skywalk: A smart solution for pedestrians in Dhaka 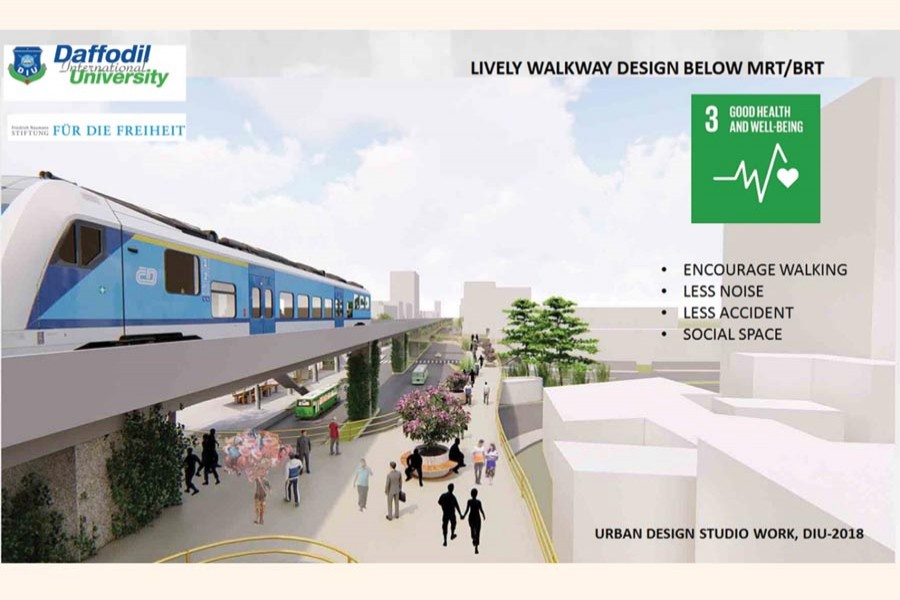 Dhaka, one of the most densely populated megacities in the world, has become the second least livable city according to the Global Livability Index 2018 report prepared by the Economic Intelligent Unit (EIU) of the Economist. It has surpassed the war-torn Damascus, Syria in the category of infrastructure even.

As far as traffic speed is concerned, the speed in Dhaka has fallen to 6.0 kilometres per hour according to World Bank. Traffic congestion eats up 3.2 million working hours per day. Another report by UK-based firm Zipjet has ranked Dhaka as the second least livable city after Lagos, Nigeria in terms of physical health condition. Generally, cities are considered as hubs for ideas, business, culture as well as the home of regulating bodies. Activities and decisions taken in cities, especially in capital cities like Dhaka, enable citizens to advance both socially and economically. For Dhaka's dwellers, all these problems are weighing down on their productivity ultimately hampering the growth and progress of the nation.

Many policy measures and plans have been taken and some of the developmental works like the metro rail transport (MRT) project, bus rapid transit (BRT), elevated expressway and others are in progress. Definitely, once these projects are completed, people's mobility around the city will become more convenient. Metro Line-6 (from Uttara to Motijheel) alone will carry 60,000 passengers per hour at both ends, according to Japan International Cooperation Agency (JICA).

One fact that needs to be pointed out here is that the ongoing projects would not meet the growing demand as the city's population is expected to double by 2035. Moreover, after the completion of the Padma Bridge, mobility around the city will also increase. Experts have always focused on a major point: "The roads of Dhaka City are made for vehicles, not for people." It is indeed a major topic of debate at this moment. Designing roads for people has the potential to reduce traffic pressure on roads passively, but efficiently. Many cities of the world have worked on this and have been greatly rewarded.

Most city plans, which were approved in the past, barely addressed the pedestrian mobility issue. Most of the MRT and BRT designs show that around 20,000-30,000 people will be carried per hour at both ends. On the long routes, around 5,000-6,000 people will interchange a particular station per hour. Later on, all the passengers will return to the footpaths that are not prepared to take this huge pressure. These footpaths are also encroached in many places by hawkers, police boxes etc. Due to the narrowness of footpath, the MRT stations will be forced to use foot over-bridges to disperse passengers. A heavily-used foot over-bridge can accommodate only 1,000 people per hour (DIU Urban Study- 2018).

In this backdrop, skywalks can be a solution. These can allow pedestrians to walk very short to long distances. The skywalk system may work by connecting metro rail, BRT, as well as other transport stations and buildings like shopping malls, hospitals etc. The skywalk may be built solely by the government or under public-private partnership.

If we look at the developed countries, especially at Canada, Singapore, Thailand and USA, we will find that they have installed skywalks in their major cities. Skywalks are especially used in USA and Canada in universities and colleges of different states even.

The proposed skywalk system in Dhaka can be set up right underneath the MRT stations at a height of nine feet from the ground. The structural support of the MRT or BRT can support the skywalk without requiring new columns if the matter can be decided and approved during the design phase of MRT or BRT. A continuous walkway below the transport route, extending 8-10 feet on both sides of the pier will be cost-effective as well. These will need no shed and electric fans can be used to make the skywalk comfortable as heat in the urban areas is also a major problem. The horizontal surface of this infrastructure (platform, roof top of the stations etc.) will provide opportunities to set up solar panels on roof of the stations. Power from these can be used for lighting inside the skywalk.

For elderly people and children, moving walkway, like the kind used in airports in developed countries, can be installed on one side of the skywalk. This feature will also attract users of all ages to use the skywalk and increase mobility. The walkway can offer a vibrant lifestyle by offering different civic functions on the way, such as restaurants, parks, play zones etc. The government can play a vital role in deciding the proposed functions in different zones of skywalk. If a safe pedestrian walkway can be ensured, then definitely traffic congestion and air pollution can be minimised drastically as personal car use will decrease. Additionally, the wide skywalks can promote art and culture. The median and sidewalks may be used for tree plantation. Small kiosks can be provided by City Corporation to accommodate registered hawkers on both sides of pier. In these ways, the skywalk can be integrated into the urban life of Dhaka city. A skywalk project can also enhance the overall health status in the city as it will promote walking. This will help the country's progress in Sustainable Development Goals (SDGs), particularly SDG-3 which addresses 'good health and well-being'.

Bangladesh demonstrated outstanding performance in the Millennium Development Goals (MDGs) and likewise has committed to achieving most of the targets of SDGs by 2030 when Dhaka is forecasted to become the fourth largest megacity in the world. The smart pedestrian system of skywalk can supplement the achievement of the government's vision for the future.

Prof. Khairul Enam is head of the Department of Architecture at Daffodil International University (DIU).

Altap Hossen is an economic analyst.