The fading dominance of motor-launches 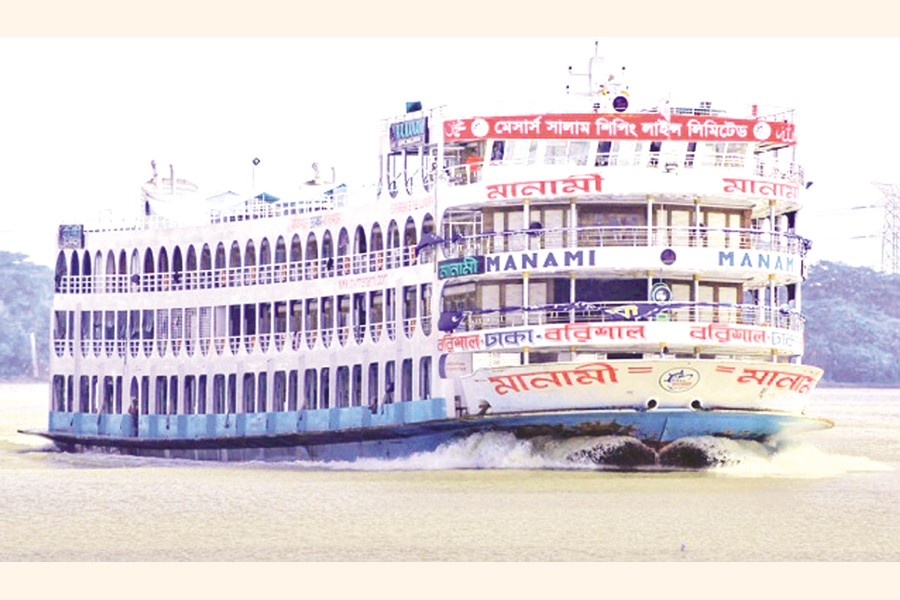 The most common river vessels in Bangladesh chiefly comprise country boats. They are followed by motor launches, plying a number of fixed routes on the country's small and large rivers. The southern region of the land had long been dependent on these water routes and long-haul passenger launches. People travelling these water routes, despite having to spend long hours, had few options. By choosing these launches as a mode of commuting or travel to their village homes, especially from Dhaka and nearby areas, they couldn't think otherwise while embarking on these journeys. Few would call the travels, though undertaken regularly, a commute. Commuting is confined to daily, or a little longer, travels to the workplace and back home. In the last more than three months, many office employees have picked the practice of visiting their village homes every Friday-Saturday.

The route is highway-based; and to the travellers bound for the southern areas the newly built Padma Bridge has emerged as a great infrastructural wonder. No sooner had the massive communication behemoth over the Padma opened than the south-bound people rushed to use it. Few travellers had ever thought that a revolution in the country's road communication was going to materialise for them, let alone this fast. After years of unavoidable delays, it occurred in the form of the Padma Multipurpose Bridge opened on June 26, 2022. Proving the compulsive pessimists wrong, the bridge opened to the spontaneous delight of the people, especially the land route-dependent segments almost all over the country. They included especially those native to the south and south-eastern Bangladesh.

Every great national feat finds a segment of people falling victim to a new situation one or another way. With the small and large motor-launches in their zenith of popularity, the boat-based journeys and commutes began vanishing from the rivers, almost invisibly. They realised it was now their turn to depart the rivers, which had been integral to the Bangladesh waterways for centuries. This is how the impassive history witnesses its progress. The launches had entered the river-travel front so aggressively that the now-abolished but once-dominant paddle steamers had few way-out but leaving the race by winding up their business. Even people like Dwarakanath Tagore (1794-1846), the grandfather of Tagore the Poet, had failed to stay in the steamer business in the mid-19th century. He operated his river-suiting British-made ships on the Kolkata-Khulna route. Other river communication entrepreneurs remained stuck to the Dhaka-Barisal route, but to no avail. In course of time, they had discovered the sharp decline in passengers and cargo. As an inevitable consequence, the paddle steamers began counting losses, and eventually they wound up their business.

Many dubbed the development an instance of mindless defeat of the steamers to the gorgeous emergence of motor-launches. Thanks to their diesel-operated engines and the ability to ply even narrow river routes, the launches continued to enjoy ever-increasing popularity among the passengers. After operating on the Bangladesh river routes in a dominant style following the steamers' phase-out, the bell appears to have started tolling for the launches. Few have ever thought about this plight of the launches. The spectacle of 24-hour docking and departure of these vessels at Dhaka's Sadarghat terminal has lately vanished. A similar scenario could be encountered at other busy launch terminals elsewhere in the country. They include the terminals in the greater Barisal, Chandpur and a number of river bank stations. The non-plying of the ordinary two- to imposing 3-storey launches from Dhaka to southern Bangladesh, and vice versa, has emerged as a major tuning-point in the Bangladesh communication sector. The importance of roads connecting Dhaka with the south and south-eastern points, thanks to the Padma Bridge, now keeps increasing.

As a corollary, many of those who have been sticking to long-distance launch travels have started turning to journeys by road. After travelling on highways and roads by bus and car, the south-bound people conclude that road travels are fabulously less time consuming. The greatest volume of credit for these speedy travels goes, indisputably, to the Padma Multipurpose Bridge. In short, the undisturbed road communication between Dhaka and the southern regions has drastically reduced the travel time on Dhaka-Barisal route and other areas connected to Dhaka. All national watersheds in the communication sector have their fallout too. In the case of Bangladesh, the smooth road travel, without boarding crowded ferries, has evidently taken a toll on launch movements. The Barisal-Patuakhali bound launch passengers once had to spend a whole night to reach their destinations. The travel-time has almost halved for those who opt for direct buses, and also on a broken journey. The Padma Bridge plays a vital role in these shortened travels.

It seems an irony that the once invincible launches have no place in these communication means connecting the southern region to the capital. This turn of things can be compared to planes replacing the ocean-going ships, or the phone-calls, and the following online communication, rendering the letters anachronism. This is part of the dispassionate process of history.

Finding themselves amid the stark reality of disappearing from the Bangladesh rivers, the launches have started bracing for the inevitable --- the fate of the paddle steamers after dominating the country's waterways for decades. Against the backdrop of the launches witnessing a fast decline in their traditional passengers, the launch owners, the non-technical staff and the crew members have already started feeling apprehensive about their livelihood. After observing the plight of the launches, many experts in river travel now conclude that the disappearance of motor launches from the country's major routes is now a matter of time. According to them, the launch-owners now have to remain content with the 40 per cent of the vessels' passengers travelling on long routes. Evidently, a major segment of the launch passengers from Dhaka have begun opting for the highways connecting the southern part of the country through the Padma Bridge. In every aspect of the modern life, fast speed in movement matters a lot. Even saving two hours during a long-distance travel brings benefits to passengers. The fruits of travelling by road had long been mulled by the aspiring passengers when it came to the Dhaka-Barisal-Patuakhali routes. Now that the dream, many calling it a pipedream, came true with the Padma Bridge in place, the launches being victims could be termed a foregone conclusion --- no matter how unsavoury the development may unfold to the motor-launch owners. In dealing with the adverse situation, the launch-owners have spectacularly reduced the fare on many routes. Concurrently, they have to put up with the periodical rises in operational expenses.

However, the launch owners ought not to start foreseeing bleak times over their sitting idle or feared closures. They have vast prospects for operating their vessels in the tourist spots in river-filled Bangladesh. People also love to spend two to three days on launches crisscrossing the unknown areas in rivers.