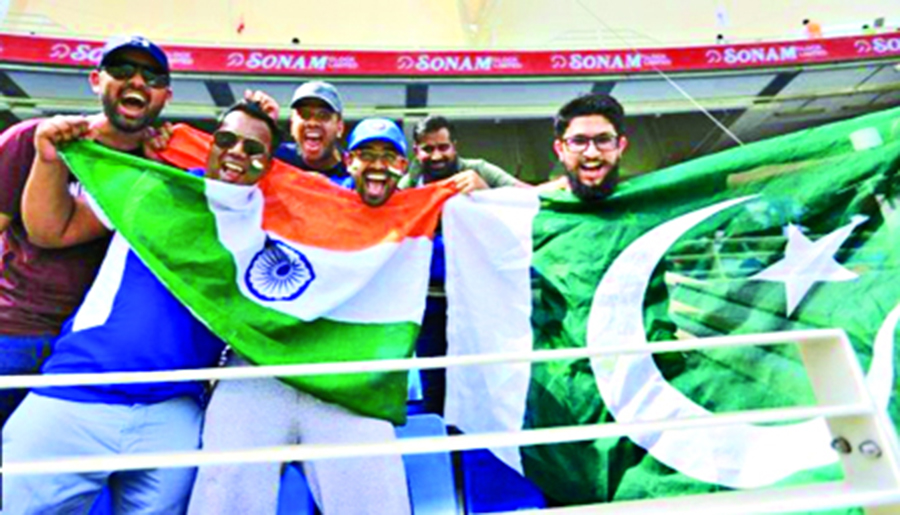 MANCHESTER, United Kingdom, June 15 (Agencies): India and Pakistan will resume their exhilarating cricket rivalry when they lock horns in a World Cup 2019 league stage match at Old Trafford in Manchester on Sunday.

However, the rain gods might play a spoilsport in the blockbuster clash. If weather permits, the arch-rivals will leave no stone unturned in the match that created a storm well before its arrival.

While India, under the captaincy of Virat Kohli, are unbeaten in World Cup 2019 so far, Sarfaraz Ahmed-led Pakistan have just a solitary win to their name -- a victory over top-ranked England.

Even if they feel that it is just another game, perhaps all players in their hearts know that this is a special match even if at times the reason is purely non-cricketing.

A cricket match between India and Pakistan is one of the biggest draws in sport - watched by a worldwide TV audience of up to a billion people and often an emotional occasion both on and off the field.

India cut off bilateral cricket ties with its neighbour after the 2008 Mumbai terror attacks, with authorities blaming Pakistani militants.

Pakistan toured India in 2012/13 for a series of one-day internationals and Twenty20 matches but they have not faced each other outside of a multi-nation tournament since.

Tensions between the two countries soared earlier this year and some Indian fans and ex-players called for India to boycott the match at Old Trafford.

In February a suicide bombing in Indian-administered Kashmir -- divided between India and Pakistan since partition in 1947 -- claimed by a militant group based in Pakistan killed 40 Indian troops.

India and Pakistan then carried out tit-for-tat air strikes.

On the pitch, India have won all six of their meetings against their neighbours in World Cups as they look to maintain their perfect record in Manchester.

India beat Pakistan in their most recent encounter at the Asia Cup in the United Arab Emirates last year.

But at least Pakistan can look back for inspiration to the final of the 2017 Champions Trophy in England, when they thumped their fierce rivals by 180 runs.

"May there be peace and tranquility while the two Asian giants fight it out on the cricket field," former India captain Bishan Singh Bedi told AFP.

"And may the better team win without losing out on the etiquette of cricket."

Kohli's side have lived up to their billing as one of the favourites along with holders Australia and hosts England, with two wins and a washout in three matches so far.

The number-two ranked side won their opener against South Africa and then beat defending champions Australia before a no result against New Zealand.

Pakistan, by contrast, are struggling in the 10-team table with just one win -- an upset against England, two defeats and a washout.

Kohli downplayed the frenzy and excitement surrounding the high-octane clash, with more than a billion people set to tune in, but said the "intimidating" atmosphere would bring out the best from his players.

Pakistan skipper Sarfaraz Ahmed said his team needed to learn from their mistakes to get past a powerful Indian side.

"We have to overcome our mistakes because India are also a very strong team. We will assess our performance and then we will plan," he said.

Passionate fans of both sides want local bragging rights even if their team ultimately goes on to lose the tournament.

The two teams have played each other in 131 ODI games, with Pakistan having a clear edge with 73 wins, despite their poor record against India at World Cups.

This World Cup has been plagued with rain and both Pakistan and India have each had one match washed out. Overall, four matches in the tournament have been rained out.

According to BBC Weather, there are light chances of showers and a moderate breeze. The likelihood of rain increases as the day progresses.

The match will start at 3:30pm during which the chance of rain is 13 per cent.