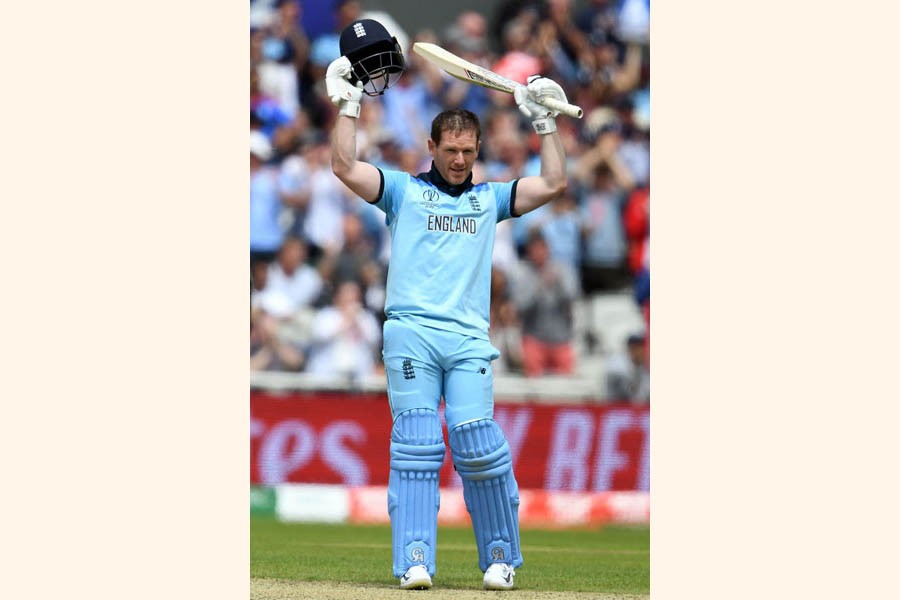 MANCHESTER, United Kingdom, June 18 (Agencies): England captain Eoin Morgan set a new world record for the most sixes in a one-day international innings, with 17 in his 148 against Afghanistan during a World Cup match at Old Trafford on Tuesday.

Morgan's tally surpassed the record of 16 previously shared by India's Rohit Sharma, South Africa's AB de Villiers and West Indies' Chris Gayle -- whose 16 sixes in his 215 against Zimbabwe in 2015 was the previous record at a World Cup.

But one ball after launching Gulbadin Naib for the record-breaking six, Morgan holed out off the Afghanistan captain Morgan's 17 sixes in an innings is the most by an England batsman in a World Cup match by far. Before this tournament, David Gower (9) held the record for most sixes by an England player in World Cup history.

Meanwhile, this was also the fourth fastest century by any batsman in the history of the World Cup. There have been only three centuries hit in fewer balls - the 50-ball century by Kevin O' Brien in the 2011 World Cup, the 51-ball century by Glenn Maxwell and the 52-ball one by AB de Villiers in the 2015 World Cup.

Morgan has also raced ahead in the race for the most sixes at the 2019 World Cup. He has hit 22 sixes in the tournament now, with Aaron Finch (14 sixes) in second place on this list. His's 57-ball century was the fifth fastest by an England batsman in ODIs. Only Jos Buttler (twice), Moeen Ali and Jonny Bairstow have scored quicker centuries.

Through his 71-ball stay at the crease, Morgan only played three defensive shots, only edged the ball six times and didn't play and miss once.

England blasted a world record 25 sixes in a one-day international innings in Tuesday's World Cup clash against Afghanistan. Eoin Morgan's side beat the previous ODI record of 24 that they set against the West Indies earlier this year. Morgan hit 17 of the sixes against Afghanistan at Old Trafford, while Moeen Ali smashed four, Jonny Bairstow three and Joe Root one in England's total of 397-6.

England finished their innings at 397/6 in 50 overs, their highest ever World Cup total.