Most English fans keep away from Cricket WC 2019 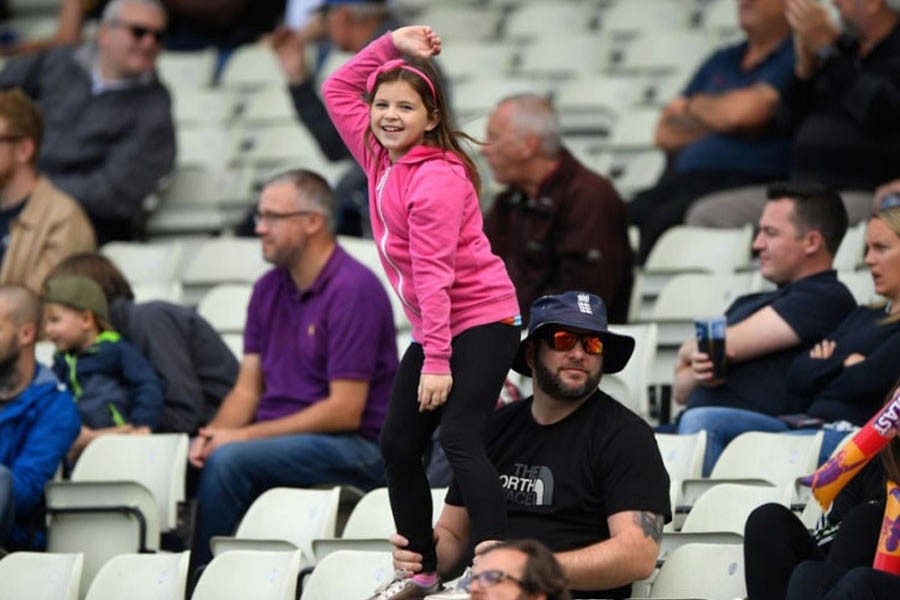 The ECB seeking a new audience

The last time England hosted the Cricket World Cup 20 years ago they suffered the embarrassment of being knocked out before the official tournament song had even been released.

Their record has scarcely improved since. Yet Eoin Morgan's side is the 2019 tournament's favourites.

England were too warm, too welcoming, so charmingly, disarmingly, hospitable. Over the road, the England team seemed to be pretty disorientated too.

The crowd in the ground was split roughly 50-50 but the others fans were louder and at times it felt more like an away game, the stands rattled with the ratta-tat-tatta-ta of dhol drums and echoed with hoots and hollers every time the ball went near an English fielder.

England were surprised to find so many people cheering for the other side. They had best get used to it.

It will be similar when they play Bangladesh in Cardiff and Afghanistan in Southampton in a fortnight's time, the same against India at Edgbaston at the end of the month.

The ICC's statistics show more than 80 per cent of the tournament's tickets were bought by people who live in England, but less than 50 per cent by people who support the England team. So the Cricket World Cup is one long, loud, rebuttal of the old Norman Tebbit test, and the idea that migrants, and their children, ought to support England.

Many of the spectators will be British Asians, born in the UK to émigrés from the Indian subcontinent. They proudly fail a test set almost 30 years ago by former Conservative cabinet minister Norman Tebbit, who suggested immigrants had not integrated into UK society if they backed their native country over the English cricket team.

Even Tebbit, 88, has caught on. Modern-day England is many things, and might even be the only country where you could stage a tournament like this one, and cricket the only sport that would draw such a wide mix of support from its post-colonial population. There are around 1.5 million Indians, 1.2 million Pakistanis, 500,000 West Indians, 450,000 Bangladeshis, 200,000 South Africans, 170,000 Sri Lankans, 125,000 Australians, 75,000 Afghans, and 60,000 British New Zealanders living in Britain, and for the next six weeks everyone who cares will be busy supporting their own team.

The Telegraph Sport reported, ninety-five per cent of the fans inside the grounds, who pounced with military efficiency on tickets being offloaded by free-market-savvy Australian, English or South African fans, are from the sub-continent.

Without doubt this has made for incredible atmospheres within stadiums and it is a relief that, to some people at least, cricket's appeal remains. But such enthusiasm, passion and interest in the game is in stark contrast to the despondency of the wider English public.

While Australia took on India behind a pricey television paywall and heavily guarded gates in central London, 6.1 million tuned in, for free, to watch England's women play football in France.

That is more than 11 times the number of average viewers watching England's men in the Cricket World Cup. Its scheduling, including the final, clashes with major football, tennis and Formula 1 events.

The announcement to great fanfare that highlights would be free-to-air has, in fact, seen them broadcast late at night, often past midnight, competing with reruns of Gogglebox.

The ECB will point to sold-out grounds and the positive effects of its South Asian Action Plan, launched last year to improve the inclusion of a hitherto poorly-engaged community.

But swathes of empty seats at matches suggests it is less the eager, humble fan filling up stadiums and more the result of shrewd commercial planning, with tickets allocated to sponsors, corporates and tour groups months in advance.

Unconcerned and with offers of alternative fun, it is not these recipients who will be breathing life back into the sport.

Better inclusion of the South Asian community is long overdue, and the ECB's efforts are laudable. Many other, equally important and once-reliant support-bases, however, are fast disappearing.

The absence of free-to-air television is a - if not the - major factor. But beyond this general engagement calamity, where are the plans to improve participation amongst the once vibrant West Indian diaspora? Or the collieries in the Midlands and North which once formed the backbone of the domestic game?

As the tournament begins its slow progress northwards, it appears the ECB has already admitted defeat; that cricket's popularity and engagement in the sub-continent will never reach these shores.

There is a sweet irony that cricket's imperialist inventors now submit to its Indian innovators, but it is a sad and preventable decline of a sport which was once the heartbeat of the English summer.

According to the International Cricket Council, the sport's world governing body, 135,000 people have bought tickets for the world cup, with 82 per cent from the UK.

Of those, about half told the ICC they would support England, the tournament hosts, while 37 per cent declared themselves fans of one of the five Asian nations in the competition: India, Pakistan, Bangladesh, Sri Lanka and Afghanistan.

But many British Asians suggest this loyalty oath would be a simplistic framing of their complex identity.