The "unseasonal" rainfall in England has marred the 2019 edition of the ICC Cricket World Cup tournament, but it is the insurance companies that are really bearing the brunt of it.

Rain washed out play in four matches -not a ball was bowled in three- in the ongoing Cricket World Cup in England. Another was truncated to 41 overs by the unusually heavy downpours that have left fans despondent. As a result, it is the insurance companies that have had the poorest World Cup so far, even more than the fans. Star has insurance cover for their entire Cricket World Cup 2019 broadcast, so insurance companies are the biggest losers in case a match is abandoned. As for advertisers, they will pay to Star only when they are given promised 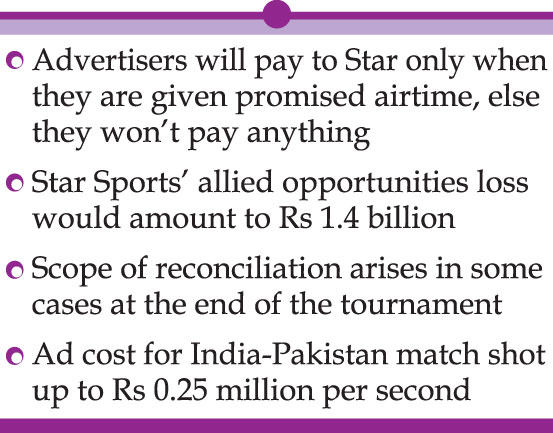 airtime, else they won't pay anything.

Insurance premium for a match is about Rs 12 million- 15 million (1.2-1.5 crore) (all stake holders included), which is about 2 per cent of insurance cover. A rain affected World Cup so far, has alerted insurance companies and now they have increased premium by up to 300 per cent.

The three washed out games till date have dealt a severe blow of Rs 1.8 billion (180 crore), which the insurance companies had to pay to various stakeholders in terms of compensation. Broadcaster Star Sports reportedly had to incur the maximum amount of losses.

Star Sports' claims for advertisement revenues and allied opportunities loss would amount to Rs 1.4 billion (140 crore), Insidesport reported. The insurance premium has shot up to 300 per cent and the companies are reluctant to take the risk.

Three matches were fully washed out in the first two weeks of the World Cup in England and Wales.

The channel has about 5,500 seconds of total inventory, which is the time slot they can sell to the advertisers. Now, the rates for these slots are usually in the range of Rs 0.16 million- 0.18 million (1.6-1.8 lakh) per second.

However, for India vs Pakistan match, the cost has shot up to Rs 0.25 million (2.5 lakh) per second and there's actually a rush among the advertisers for the slots.

Star Sports had sold off most of the inventory much in advance, which meant that last-minute booking had to be done with even higher prices.

Depending upon the package the advertisers have purchased, companies will bear the losses. The advertisers who are supposed to play their ads on the live programme and not the analysis and highlights suffer the most. The time slot they have purchased get carried forward to another match.

A clause in their contract ensures the carry forward of the time slot. The broadcaster tries to use the missed inventory in the matches scheduled for later dates, on a like-to-like basis. This means that if an India match is cancelled, the advertiser can opt to use that free commercial time (FCT) on another India match, and same goes for a non-India match, FCT can be booked on another non-India match, provided there is inventory available on later matches.

However, scope of reconciliation arises in some cases at the end of the tournament. But, for the broadcaster, an insurance clause covers the loss of revenue but only if not a single ball is played.

An insurance cover will protect the broadcaster primarily against the advertising revenue losses. The stakes are not limited to monetisation during the live broadcast of a sports event.

Above all, any broadcast match will contribute to World Cup's overall television ratings, which eventually determine the broadcast success and value of a television property.