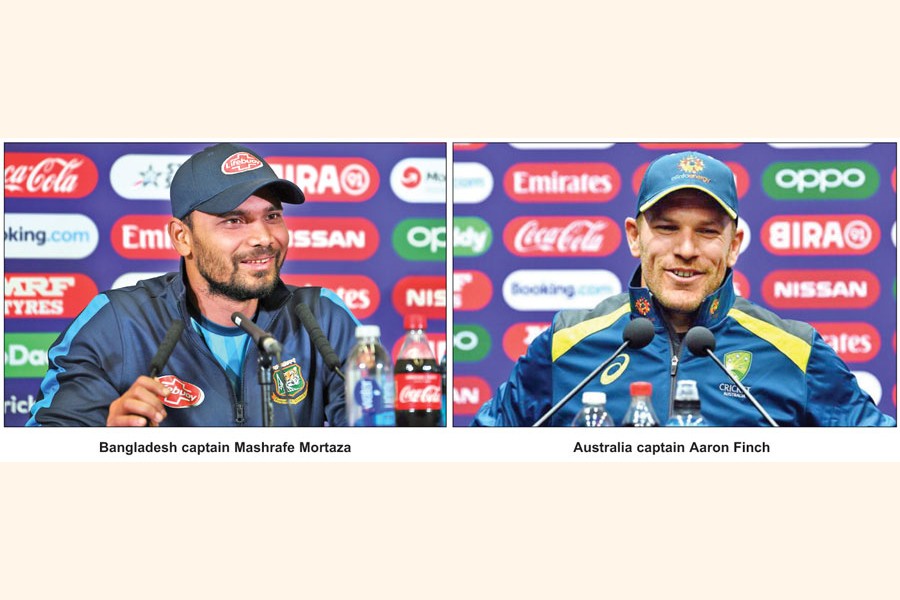 Losing the game at Trent Bridge, Nottingham, will almost end their chance of securing a place among the top four teams after the league stage. 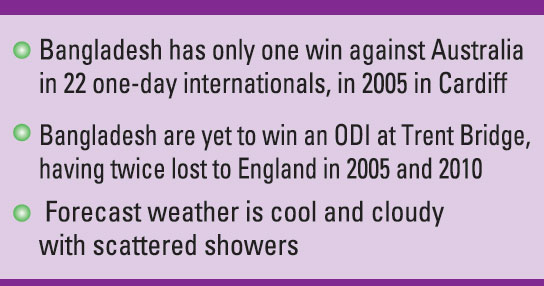 While Australia have so far secured eight points, Bangladesh have five. It means the Tigers not only need to win all four of their remaining league stage matches but also improve their run-rate.

As per the playing condition, if two teams have the same points, they will be sorted out based on their run-rate.

Buoyed by their emphatic win over West Indies, Bangladesh will be brimming with confidence when they face a stiff test against Australia in their crucial World Cup fixture at Trent Bridge, here on Thursday.

With wins against South Africa and West Indies, Bangladesh have declared that they are no more underdogs and, now, they would aim to make a place in the semifinals.

Chances were missed against New Zealand and England, the only two losses in five group games for Bangladesh so far.

Bangladesh has only one win against Australia in 22 one-day internationals, in 2005 in Cardiff. Bangladesh captain Mashrafe Mortaza is the only survivor from either side. He trapped Australia opener Adam Gilchrist for a duck.

Bangladesh are yet to win an ODI at Trent Bridge, having twice lost to England in 2005 and 2010.

Bangladesh have shown what they are capable of when they comprehensively beat the West Indies, riding on a magnificent 124 not out from all-rounder Shakib Al Hasan.

In the form of his life, Shakib has already hit back-to-back centuries and Australia would still remember that it was he, who had plotted their downfall in Bangladesh's historic Test victory against them two years ago with a 10-wicket match haul.

The format is different but coach Justin Langer admitted that his side will have to deal with Shakib.

"He (Shakib) probably is the world's best all-rounder and a left-arm spinner," said Langer.

With able support from Mohammad Saifuddin (nine wickets), Mustafizur Rahman (seven wickets), and - off the bench - Liton Das (a 94 not out), Bangladesh has growing belief that it has the depth and the fight to go far.

With five points from as many matches, Bangladesh have become a contender for the semifinal spot.

Australia have not been at the top of their game in the ongoing World Cup so far. They have suffered batting collapses and have been put under pressure. Despite that, they have been able to register four victories and are currently placed at the second spot in the points table.

But Australia is also in high spirits, bolstered by the return to fitness of Nathan Coulter-Nile and, especially, allrounder Marcus Stoinis.

Pacers Mitchell Starc and Pat Cummins are proving to be a nightmare to face for the opposition batters, barring India who took them for plenty at the Kennington Oval.

Skipper Aaron Finch and David Warner are providing them with solid starts and laying the platform for the likes of Steve Smith, who has been a rock in the middle order.

The Trent Bridge surface was on the dry side for England versus Pakistan and West Indies versus Australia, but rain in the interim caused India versus New Zealand to be abandoned and may also have freshened up the square somewhat. Forecast weather is cool and cloudy with scattered showers.

Thursday's match is scheduled to kick off at 3:30pm (BdST). It will be telecast by Maasranga tv, Gtv, and Btv. Viewers can also watch the game live on Rabbithole (rabbitholebd.com) and Bioscope (bioscopelive.com).