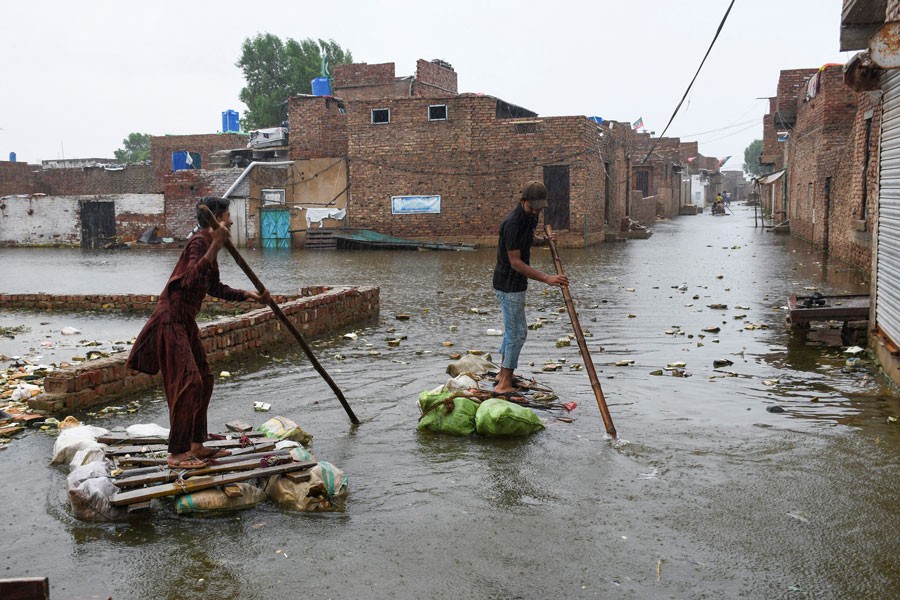 Men paddle on makeshift rafts as they cross a flooded street in Hyderabad, Pakistan during recent flooding — Reuters

Executive director Peter Sands said that in 2022, the fund had witnessed the "escalating impact" of climate change on health.

While upsurges in malaria had hitherto been seen due to the increasing frequency and devastation of tropical storms, "with the flooding in Pakistan it was taken to a completely different scale", he said.

"What we are seeing is that the mechanism by which climate change will end up killing people is through its impact on infectious disease."

Sands said that parts of Africa which previously were unaffected by malaria are now becoming at risk as temperatures rise and allow mosquitos to thrive, notably at higher altitudes.

However, the population in such areas will not have immunity, with the resulting risk of a higher mortality rate.

"It's quite alarming," Sands told a briefing with the UN correspondents' association.

Other threats include tuberculosis spreading among the increasing number of displaced people around the world.

"TB is a disease that thrives on having concentrations of highly-stressed people in close confines with inadequate food and shelter," he said.

"The more that we see climate change-driven displacement of people, the more I think that will translate into the conditions that will at least make it more likely."

As for whether the world was better prepared for the next pandemic than it was for Covid-19, Sands said it was, but added: "That doesn't mean we are well prepared: we're just not as badly prepared as we were before."

By the end of 2022, Sands said the Global Fund will have invested around $5.4 billion, which is significantly more than it has ever done before.

The Geneva-based organisation's largest donors are G7 governments, led by the United States and France.

"For the people we serve in the poorest, most marginalised, most vulnerable communities in the world, 2022 was a brutal year," said Sands.

"In the poorest communities in the world, HIV, TB and malaria are killing many more people than Covid-19."