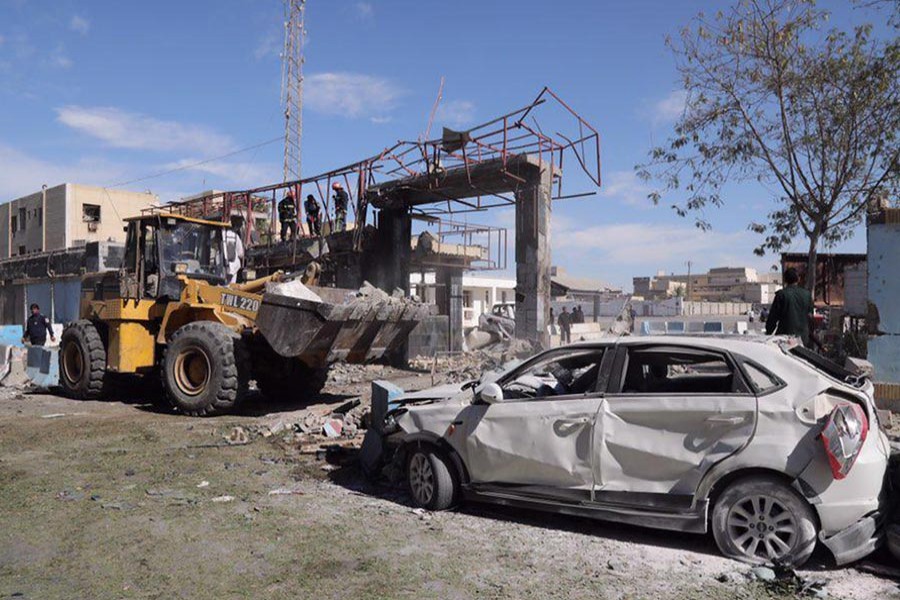 CHABAHAR: A general view of the scene of a car bombing in front of a police station — AFP

TEHRAN, Dec 06 (Reuters): At least four people were killed and 24 others were injured in a suicide car bomb attack on the police headquarters in Iran's southeastern port city of Chabahar on Thursday, Iranian state media reported.

Television also reported shooting in the area, located in the region of Sistan-Baluchestan, which is home to a Sunni Muslim minority in the largely Shia country and has long been plagued by violence from both drug smugglers and separatists.

"Three people were killed and some others were injured," Chabahar's acting governor Rahmdel Bameria told state television. "The suicide attacker set off the explosion after stopping at police headquarters in Chabahar."

The state news agency IRNA said some 24 people had been wounded. There was no immediate claim of responsibility.

Videos posted on Twitter, purportedly from Chabahar, showed thick smoke rising from the area. Reuters could not verify their authenticity.

In October, the separatist Jaish al-Adl (Army of Justice) group kidnapped 12 Iranian border guards in the remote province, five of whom have since been released.

The Sunni militant group has carried out several attacks on Iranian security forces in Sistan-Baluchestan in the past, including an attack in 2017 that killed 10 border guards.

In 2010, two suicide bombers killed at least 28 people, including some of the elite Revolutionary Guards, at a Shi'ite mosque in southeast Iran, an attack that Iranian leaders said was backed by the United States.

The attack was claimed by a Sunni separatist group called Jundullah (Soldiers of God).

Tehran accuses its Sunni-led regional rival Saudi Arabia and the United States of funding most of these groups, a charge that Riyadh and Washington deny.

Iran also says that militant groups are sheltering across the border in Pakistan and has threatened to attack their bases if Islamabad does not confront them.