Organisers exhort women to vote for change at US rallies 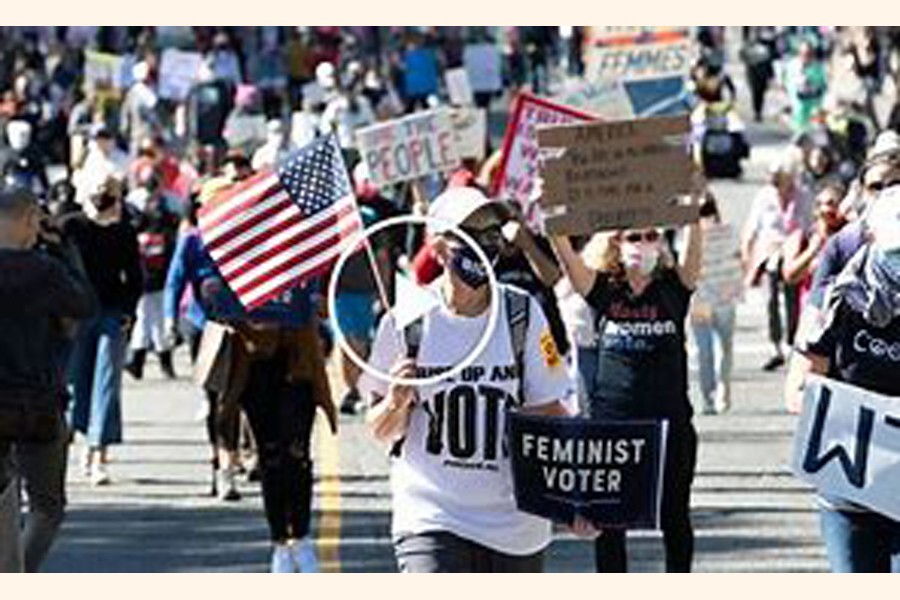 The latest of rallies that began with a massive women's march the day after Trump's January 2017 inauguration was playing out during the coronavirus pandemic, and demonstrators were asked to wear face coverings and practice social distancing.

Rachel O'Leary Carmona, executive director of the Women's March, opened the event by asking people to keep their distance from one another, saying that the only superspreader event would be the recent one at the White House.

She talked about the power of women to end Trump's presidency.

"His presidency began with women marching and now it's going to end with woman voting. Period," she said.

"Vote for your daughter's future," read one message in the sea of signs carried by demonstrators. "Fight like a girl," said another.

Demonstrators rallied in dozens of other cities from New York to San Francisco to signal opposition to Trump and his policies, especially the push to fill the seat of late Supreme Court Justice Ruth Bader Ginsburg before Election Day.

A socially distanced march was held at Cornell University in Ithaca, New York, outside the dormitory where Bader Ginsburg lived as an undergraduate student.

In New York, a demonstrator wearing a Donald Trump mask stood next to a statue of George Washington at Federal Hall during the the women's march outside the New York Stock Exchange.

"We Dissent," said a cardboard sign carried by a young woman wearing a red mask with small portraits of the liberal Supreme Court justice whose Sept. 18 death sparked the rush by Republicans to replace her with a conservative.

People wearing masks gathered peacefully under sunny skies on the City Hall steps in Portland, Oregon, to sing and listen to speakers. One speaker called for racial justice and an end to police brutality.

In Washington, the demonstrators started with a rally at Freedom Plaza, then marched toward Capitol Hill, finishing in front of the Supreme Court, where they were met by a handful of anti-abortion activists.

In one of several speeches at the rally, Sonja Spoo, director of reproductive rights campaigns at Ultraviolet, said she has to chuckle when she hears reporters ask Trump whether he will accept a peaceful transfer of power if he loses his reelection bid.

"When we vote him out, come Nov. 3, there is no choice," said Spoo. "Donald Trump will not get to choose whether he stays in power."

Next month's presidential contest was also the focus of a separate New York protest Saturday in which hundreds of demonstrators protested the killings of Black people by police officers.

Among those protesting was Tamika Palmer, the mother of Breonna Taylor, a Black medical worker killed by officers in March during a raid at her home in Louisville, Kentucky.