Pictures on social media show long queues at border posts, and on Google, the search for "how to leave Russia" skyrockets 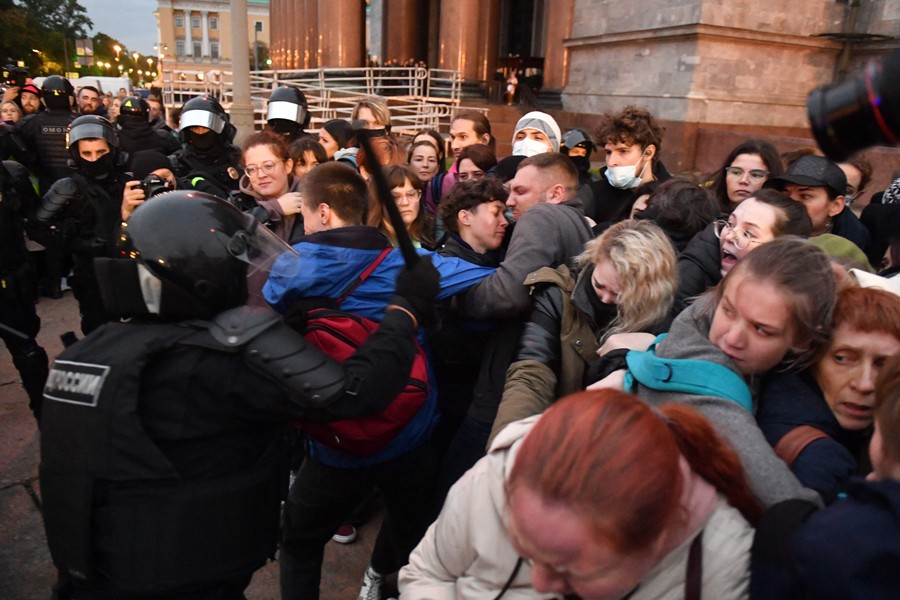 MOSCOW, Sept 22 (BBC/AFP): Russian police are reported to have arrested hundreds of protesters rallying against the Kremlin's decision to call up thousands of extra troops to fight in Ukraine.

Russian human rights group OVD-Info put the total at more than 1,300. The largest numbers arrested were in St Petersburg and Moscow.

Dozens were held in Irkutsk and other Siberian cities, and Yekaterinburg. Flights out of Russia sold out fast after Vladimir Putin's announcement.

Pictures on social media showed long queues at border posts, and on Google, the search for "how to leave Russia" skyrocketed.

Russia's president ordered a partial mobilisation, meaning some 300,000 military reservists - but not conscripts - will be drafted to bolster Russia's forces who have suffered recent battlefield reverses in Ukraine.

The move came a day after occupied areas of Ukraine announced snap referendums on joining Russia.

And in remarks condemned by Ukraine and its allies, Mr Putin stressed that he would use "all available means" to protect Russian territory - implying this could involve nuclear weapons.

The Moscow prosecutor's office on Wednesday warned that calls on the internet to join unauthorised street protests, or participation in them, could incur up to 15 years in jail. They could be prosecuted under laws against discrediting the armed forces, spreading "fake news" about Russia's military operation in Ukraine, or encouraging minors to protest.

Russia's tough penalties for spreading "disinformation" about the Ukraine war and police harassment of anti-Putin activists have made public anti-war protests rare.

But the anti-war opposition group Vesna called for widespread protests, and on Telegram it reported many arrests across Russia. A video clip from Yekaterinburg showed police violently bundling protesters into a bus.

Vesna called its action "no to mogilisation" - a play on words, because "mogila" in Russian means grave.

Pavel Chikov, a lawyer for the Russian human rights group Agora, said Agora had received 6,000 inquiries to its hotline since Tuesday morning, from Russians wanting information about soldiers' rights.

Ukraine on Wednesday announced the exchange of a record-high 215 imprisoned soldiers with Russia, including fighters who led the defence of Mariupol's Azovstal steelworks that became an icon of Ukrainian resistance.

The swap was the biggest exchange between the warring sides since the start of Russia's invasion in February.

Ten prisoners of war from countries including the United States and Britain were earlier on Wednesday transferred to Saudi Arabia as part of the exchange between Moscow and Kyiv, Zelensky said.

"We have managed to liberate 215 people," Ukraine's presidential chief of staff Andriy Yermak announced on television.

Zelensky said five military commanders including leaders of the defence of Azovstal were taken to Turkey as part of an operation prepared well in advance and agreed with Turkish President Recep Tayyip Erdogan.

The released prisoners will remain in Turkey "in total security and in comfortable conditions" until the end of the war, Zelensky added.