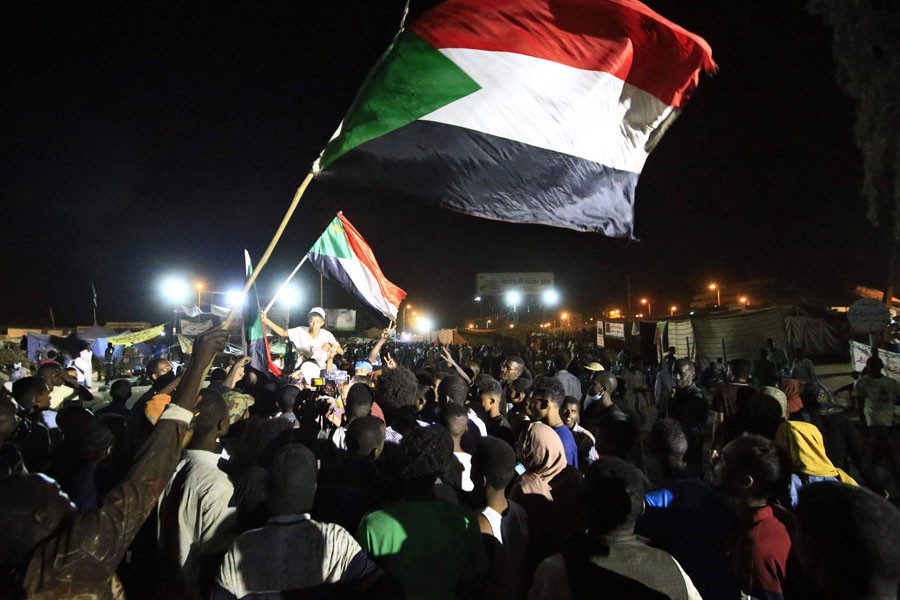 KHARTOUM: Sudanese protesters celebrating after an agreement was reached with the military council to form a three-year transition period for transferring power to a full civilian administration, in Khartoum, early on Tuesday — AFP

KHARTOUM, May 15 (BBC): Sudan's military leaders have announced an agreement with the opposition alliance for a three-year transition period to a civilian administration.

The Transitional Military Council (TMC) said the alliance would have two-thirds of the seats on a legislative council.

However, the two sides are yet to agree on a sovereign council - the top tier of power, where both want a majority.

Sudan has been ruled by the military council since last month's toppling of President Omar al-Bashir.

Protests that led to his downfall have continued amid demands for full civilian government.

Hours before the latest deal was announced, at least five protesters and a member of the security forces died in clashes in the capital, Khartoum.

Despite the attack, protesters have vowed to continue with the sit-in outside the military headquarters until their demands have been met.

At a joint news conference, Lt Gen Yasser al-Atta said a final agreement on power sharing would be signed with the opposition alliance - the Declaration of Freedom and Change Forces (DFCF) - within 24 hours. That would include the forming of a sovereign council which will rule the country until elections.

"We vow to our people that the agreement will be completed fully within 24 hours in a way that meets the people's aspirations," he said.

Gen Atta said the DFCF would have two-thirds of the seats on a 300-member transitional legislative council while the rest would be taken by parties not part of the alliance.

Earlier, protest movement spokesman Taha Osman said the sides had agreed on the structure of future authorities - a sovereign council, a cabinet and a legislative body.

DFCF member Satea al-Hajj expressed optimism that the final details on power-sharing would be agreed, adding: "The viewpoints are close and, God willing, we will reach an agreement soon."

The military had originally wanted a four-year transition period while protest leaders had sought two years.

Sadiq Yousuf, a member of the DFCF negotiating team, told the BBC Newsday programme that the composition of the 11-member supreme council was still being discussed.

"The issue has been on the number of members of the supreme council. We want eight civilians, three from the military, but they want seven military and four members."

In December, demonstrators took to the streets over a government decision to triple the price of bread. The protests soon grew into widespread anger against the president's 30-year rule.