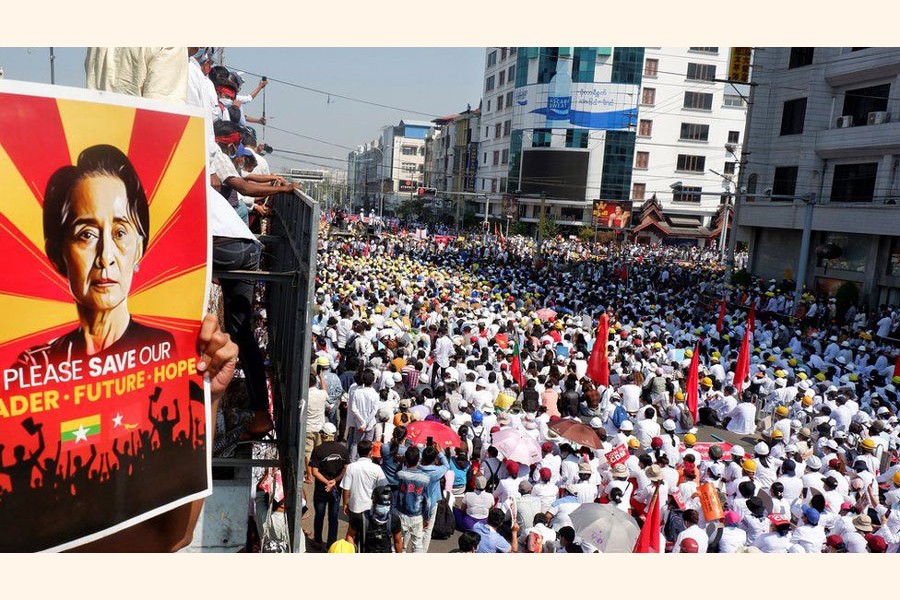 Demonstrators protesting against military coup in Yangon on Sunday — Reuters

YANGO, Feb 22 (BBC): Hundreds of thousands of protesters have turned out in Myanmar in one of the largest demonstrations yet against the military coup.

Businesses closed as employees joined a general strike, despite a military statement that said protesters were risking their lives by turning out.

Police dispersed crowds in the capital, Nay Pyi Taw, and a water cannon truck was seen moving into position.

Myanmar has seen weeks of protest following the coup on 1 February.

A statement from the military carried on state-run broadcaster MRTV said that protesters were "now inciting the people, especially emotional teenagers and youths, to a confrontation path where they will suffer the loss of life".

It cautioned people against "riot and anarchy".

The warning comes after at least two people were killed in protests on Sunday - the worst violence yet in more than two weeks of demonstrations.

Protesters are demanding an end to military rule and want Ms San Suu Kyi released, along with senior members of her National League for Democracy (NLD) party.