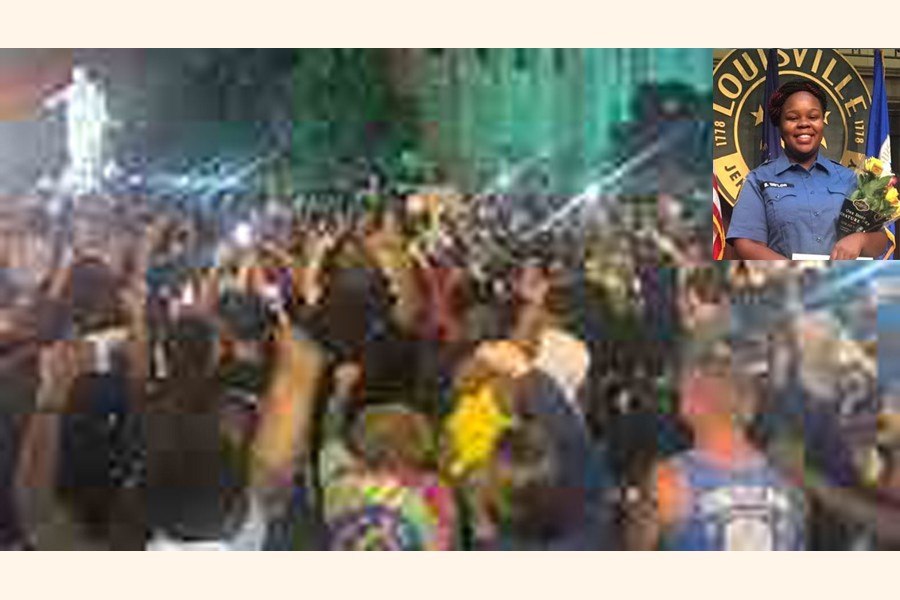 People protesting in Louisville. Breonna Taylor is in the inset — Internet

NEW YORK, Sept 24 (BBC): Two policemen have been shot amid protests in the US over a decision not to charge any officers over the killing of Breonna Taylor.

A grand jury in the city of Louisville returned only one minor charge against one of the officers, for shots which hit a neighbouring apartment.

The attorney general said the two other officers' actions had been justified.

One had been hit by a shot fired by Ms Taylor's boyfriend, who later told police he thought it was an ex-boyfriend of Ms Taylor who had broken into the apartment.

A judge had granted a warrant to search Ms Taylor's home because investigators suspected her ex-boyfriend, a convicted drug dealer, was using the address to receive packages. Ms Taylor had no criminal record.

Cases of killings of unarmed black people by police have fuelled anger across the US and beyond, spurred especially by the death of George Floyd in police custody in Minneapolis in May.

The two police shot on Wednesday are not in life-threatening conditions and a suspect has been arrested.

A state of emergency has been declared and the National Guard has been deployed. A three-day curfew from 21:00 to 06:30 (01:00-10:30 GMT) has been introduced, though crowds were still gathered after it came into effect.

At the moment protesters heard there would be no charges against officers directly relating to the killing, there were anguished cries, tears and shock at the tribute spot in Louisville dedicated to her memory.

As the evening went on, some told us they felt the officers would get charged, given the $12m (£9.3m; €10.3m) settlement the city of Louisville had agreed with Breonna Taylor's family, which they saw as an admission that there had been wrongdoing.

Others told us that in spite of the outcry after George Floyd's death, they felt there had been no systemic change and that police officers would continue to be protected in a way they saw as unfair.

The numbers on the streets thinned as the curfew approached, but that was when the two officers were shot and injured. One protester told me that he would keep taking to the streets until he saw police face the same accountability as the suspect who was arrested for shooting the officers is likely to.