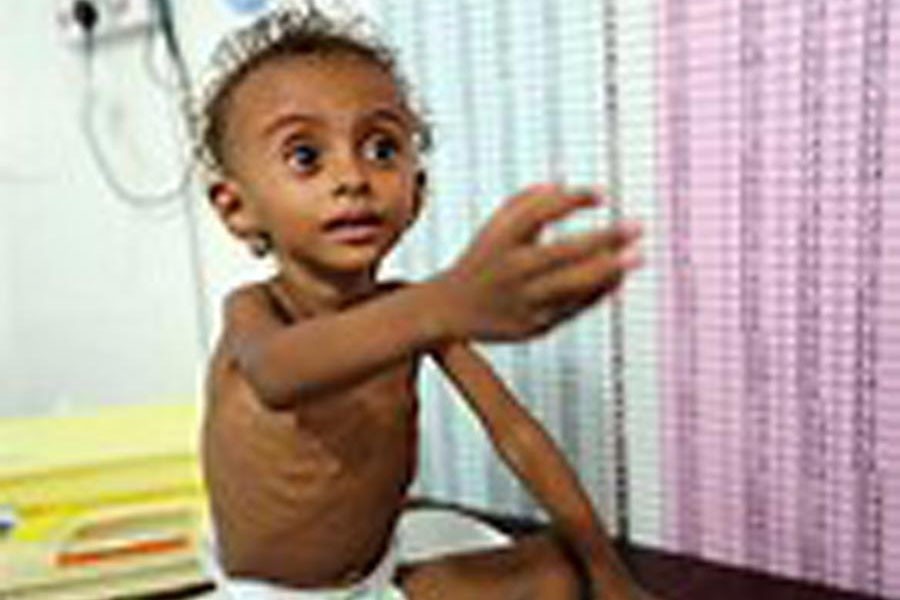 A malnourished child of Yemen — Internet

UNITED NATIONS, Sept 16 (AP): The U.N. humanitarian chief warned Tuesday that "the specter of famine" has returned to conflict-torn Yemen and for the first time singled out Saudi Arabia, the United Arab Emirates and Kuwait for giving nothing to this year's $3.4 billion appeal.

Mark Lowcock told the U.N. Security Council that famine in Yemen, the Arab world's poorest country, was averted two years ago because donors swiftly met 90% of the U.N.'s funding requirements, enabling humanitarian agencies to increase monthly aid from 8 million to 12 million people and save "millions of lives."

Today, he said, the U.N. appeal has received only 30%, about $1 billion, leaving 9 million Yemenis to cope with deepening cuts to aid programs including food, water and health care.

Lowcock said Saudi Arabia, the UAE and Kuwait "who have a particular responsibility, which they have discharged in recent years, have so far given nothing to this year's U.N. plan."

The U.N. humanitarian office said Saudi Arabia pledged $300 million to the U.N. and $200 million for other humanitarian activities in Yemen. Neither the UAE nor Kuwait made a pledge in 2020, it said.

Alluding to financial pledges that have not been turned into actual contributions, Lowcock said, "it is particularly reprehensible to promise money, which gives people hope that help may be on the way, and then to dash those hopes by simply failing to fulfill the promise."

"Continuing to hold back money from the humanitarian response now will be a death sentence for many families," Lowcock said. "So yet again, I call on all donors to pay their pledges now and increase their support."

Yemen's conflict has killed more than 100,000 people and created the world's worst humanitarian disaster, with more than 3 million people internally displaced and two-thirds of the population relying on food aid for survival. Some 24 million Yemenis, or 80% of the country's population, require some form of assistance or protection, according to the U.N.

Lowcock said the situation has been made worse by escalating conflict in recent weeks, especially in central Yemen. "In August, more civilians were killed across the country than any other month this year," he said.

Both Griffiths and Lowcock singled out the worrying situation in the province of Marib, where more than 1 million people have sought refuge since 2015.

Griffiths said a battle there would not only force those who sought refuge there to flee again but would have political implications, undermining "prospects of convening an inclusive political process that brings about a transition based on partnership and plurality."