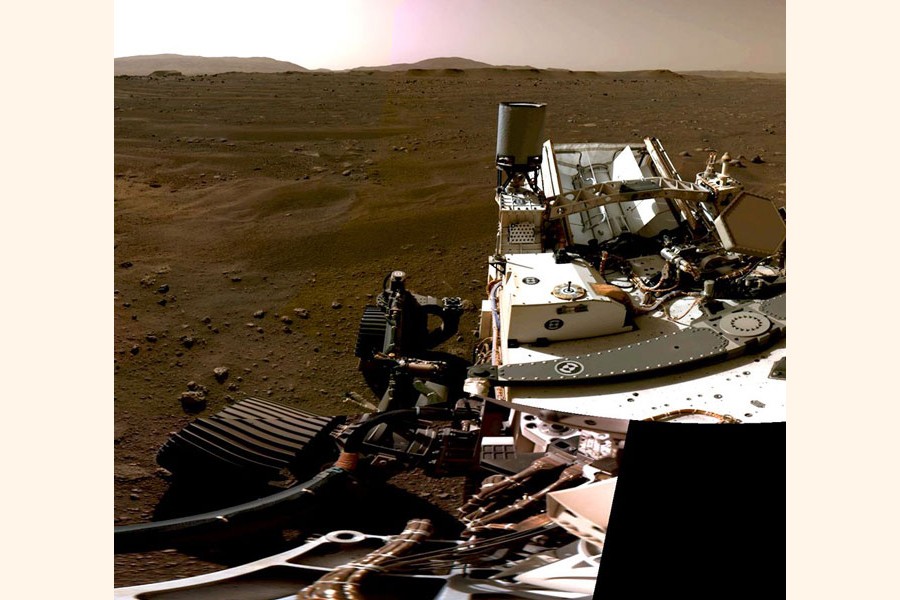 The movies cover the final minutes of last week's hair-raising descent, up to the point where the robot's wheels make contact with the ground.

The sequences show a whirl of dust and grit being kicked up as the vehicle is lowered by its rocket backpack to the floor of Jezero Crater.

Perseverance was sent to Mars festooned with cameras, seven of which were dedicated to recording the landing.

Their imagery represents vital feedback for engineers as they look to improve still further the technologies used to put probes on the surface of the Red planet.

Mike Watkins, the director of the Jet Propulsion Laboratory (JPL) in California, which is home to Nasa's Mars mission control, said the spectacular videos were an example of the agency at its best.

"We have taken everyone along with us on our journeys across the Solar System, through the rings of Saturn, looking back at the 'Pale Blue Dot' and incredible panoramas on the surface of Mars. This is the first time we've been able to actually capture an event like the landing of a spacecraft on Mars," he told reporters.

"We will learn something by looking at the performance of the vehicle in these videos. But a lot of it is also to bring you along on our journey."

All the cameras employed in the descent and landing were off-the-shelf, ruggedised sports cameras, with next-to-no modifications.

The cameras were positioned to capture key hardware events - from the release of the supersonic parachute, through the jettisoning of the entry capsule's heatshield and flight of the backpack, or "sky crane", all the way through to touchdown and the backpack's disposal.

This corresponded to roughly the final four minutes of the rover's seven-minute descent to the surface.

"We collected a little over 30 gigabytes of information, and over 23,000 images of the vehicle descending down to the surface of Mars," explained Dave Gruel, who led the camera effort at JPL.

The BBC is not responsible for the content of external sites.

One of the three cameras looking up at the parachutes failed, but the other six cameras worked flawlessly. Nasa had hoped also to record the sound of the descent with a microphone, but unfortunately this didn't succeed.

However, the team has managed to get a mic operating on the ground so there is the possibility of hearing Perseverance go about its exploration duties in the coming weeks. Already, the muffled sound of the wind in Jezero Crater has been played back.

Videos have been made at Mars before, but these were low frame-rate affairs - more what you might call "stop motion" action. The Perseverance offering on the other hand is simply jaw-dropping in its clarity and detail.

"It gives me goose bumps every time I see it - just amazing," said Gruel.

Engineers at JPL continue the work of commissioning the robot.

At the weekend, Perseverance's navigation mast, which had been stowed flat since leaving Earth last year, was raised into the vertical.

This allowed the main science cameras at the mast's top, the Mastcam-Z system, to begin building a panorama of the surrounding terrain in Jezero and of the deck of the rover itself. The latter mosaic is wanted to look for any damage that might have been inflicted by flying stones at the time of landing.