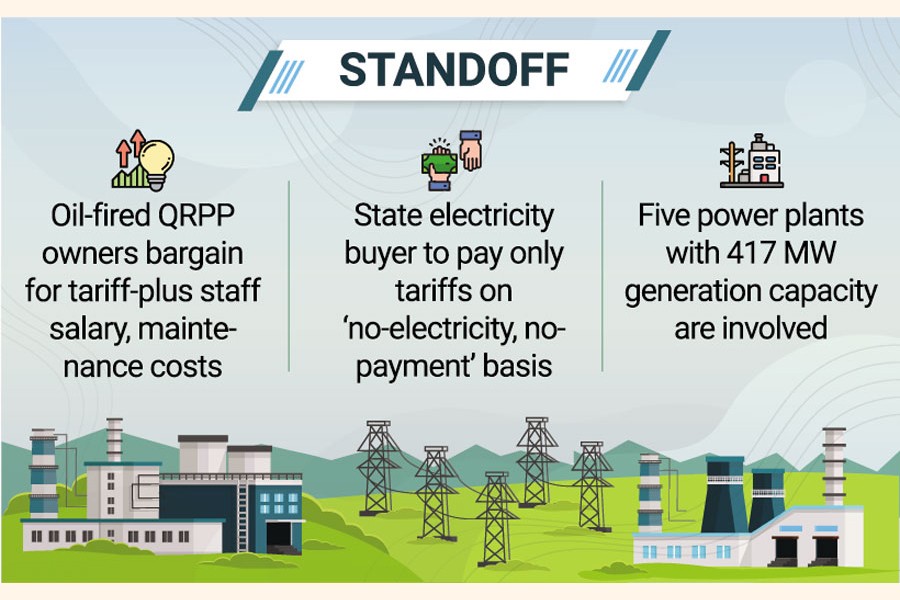 The five oil-fired power plants' owners are seeking new tariffs along with costs of employee salaries and maintenance of their plants. But the electricity buyer is interested to pay only tariffs on the recently determined 'no-electricity, no-payment' basis, they said.

"If the plant owners do not change their stance over the new tariff rate, the state-run Bangladesh Power Development Board (BPDB) might not go for any fresh agreement extending their tenures for operation," a senior BPDB official told the FE Monday.

Sources say following appeals from the plant owners the government was considering a fresh extension for these power plants by two years under 'no-electricity, no-payment' mechanism.

Power Division under the Ministry of Power, Energy and Mineral Resources (MPEMR) initially had endorsed the proposal and instructed the BPDB to complete negotiations over new tariffs.

All these much-touted QRPPs came into operation around 10 years back in mid-2011 and got initial extension by five years in 2016 under the original contract terms, they add.

Owners of these power plants along with many tenure-expired and to- be-expired companies have long been lobbying with the government to get their plant tenures extended.

Under no-electricity, no-payment model the BPDB is to purchase electricity from such plants only when necessary to meet the domestic demand, which had been mounting while the quick-power remedy was conceived to feed power-hungry households and economy.

The BPDB will not have to pay capacity payments to the plant owners if it fails to buy electricity readily available with them.

Currently, only renewable energy-based power plants, especially solar-fired ones, are operational under the no- electricity, no-payment arrangement.

All these five power plants were awarded based on unsolicited offers under the Speedy Supply of Power and Energy (Special Provision) Act 2010 when the country was reeling from an acute electricity crisis.

The law has a provision of immunity to those involved with a quick fix.

The government also allowed entrepreneurs of these power plants duty-free import of furnace oil to run plants with a 9.0-per cent service charge along with import costs as an incentive, said a senior power division official.

Total operational power plants are, however, 143 as of February 9, 2021, according to the BPDB statistics.