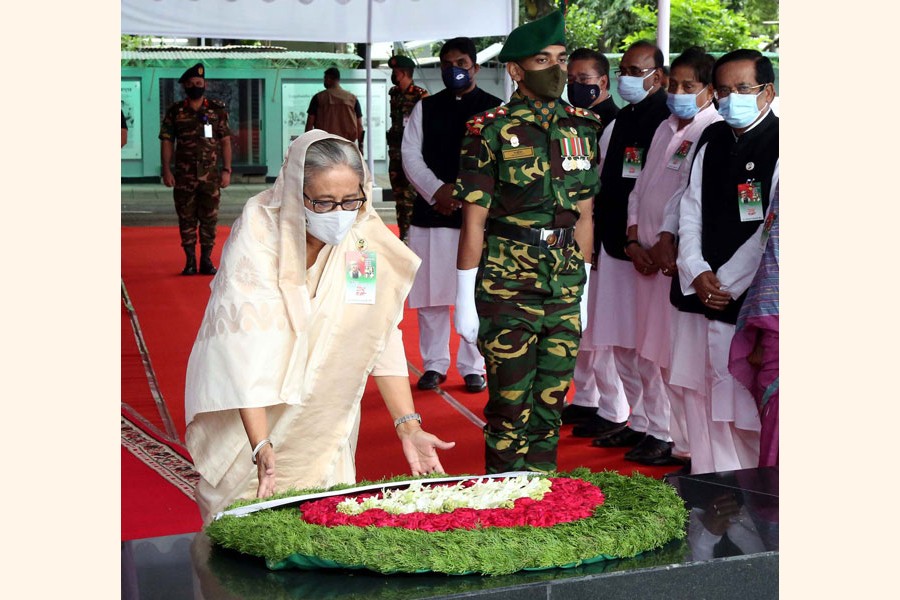 Prime Minister and Awami League President Sheikh Hasina placing a wreath at the portrait of Father of the Nation Bangabandhu Sheikh Mujibur Rahman on the Bangabandhu Memorial Museum premises in the city's Dhanmondi-32 on Thursday, marking the 73rd founding anniversary of the party — PID

Bangladesh Awami League, which led the country's independence through the 1971 great Liberation War, celebrated its 73rd founding anniversary across the country in a befitting manner on Thursday, reports BSS.

The day's programme began with placing wreaths at the portrait of Father of the Nation Bangabandhu Sheikh Mujibur Rahman at city's Dhanmondi-32 in the morning.

Prime Minister Sheikh Hasina paid rich tributes to Bangabandhu by placing a wreath at his portrait on the premises of Bangabandhu Memorial Museum.

After placing the wreath, the PM stood in solemn silence for sometime as a mark of profound respect to the memory of Bangabandhu.

Later, flanked by senior party leaders, Sheikh Hasina, also President of the Awami League, paid tributes to Bangabandhu by placing another wreath at the portrait of the Father of the Nation on behalf of her party.

To mark the anniversary, national and party flags were hoisted atop all party offices including the Bangabandhu Avenue central office in the city.

As part of the party's programme, Awami League Central Working Committee delegation led by Presidium Members Lt Col (retd) Muhammad Faruq Khan paid homage to Bangabandhu by placing a wreath at his mausoleum at Tungipara in Gopalganj at 10.30 am.