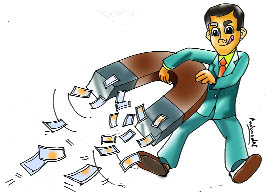 In parliament on Thursday, the finance minister noted that general tax exemption threshold for income tax has been Tk 250,000 for the last few years.

In developed countries, tax exemption threshold for income is generally less than 25 per cent of per capita income while some countries even do not have any threshold limit, he said.

Kamal fears that any increase in the tax exemption threshold will push a "significant" number of taxpayers out of the tax net, "which will eventually erode the tax base".

Moreover, the taxpayers "got habituated" with the unchanged rate of tax, according to Kamal.

Multiple corporate tax rates are in existence for different corporate sectors. It is 5.0 per cent for publicly traded companies and 35 per cent for companies not listed on the stock market.

The tax rate for banks and financial institutions was reduced by 2.5 per cent from last year, which resulted in "significant reduction" of tax collection from this sector, he added.

He concluded that the government finds "the effective corporate tax rate in Bangladesh is below 5.0 per cent".

Kamal proposed to raise the minimum tax rate for mobile companies to 2.0 per cent on their turnover from 0.75 per cent earlier.