Vegetables being cultivated on Dhk-Ctg highway 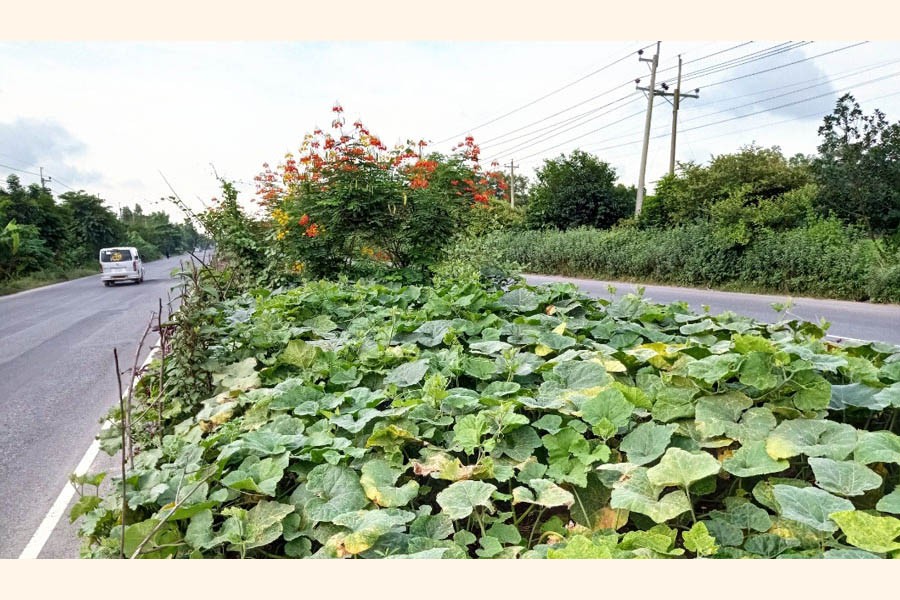 Vegetables being cultivated on the divider of the Dhaka-Chattogram highway in Cumilla. The picture was taken from the Chauddagram upazila area of Cumilla district — FE Photo

CUMILLA, Sept 23: Cultivation of vegetables on the Dhaka-Chattogram road divider is increasing day by day. Different varieties of winter vegetables are being cultivated on dividers along the highway in Chauddagram areas in Cumilla.

According to sources, farmers living along the highway first clean the road dividers. Then they start cultivating different types of winter vegetables including radish, red spinach, spinach, sweet pumpkin and coriander.

A farmer named Ahsan Ullah cultivates vegetables on the road divider in the Sujatpur area of Chauddagram upazila.

Ahsan Ullah said, "The soil of the divider in the middle of the highway is very fertile. So, I have decided to cultivate vegetables here. With that idea, I started cultivating winter vegetables on the divider".

"In the meantime, I have sold some radish after meeting the needs of my family. I will be able to earn extra money by selling the rest of the radish. Vegetable is being produced without applying any kind of chemical fertilizers and pesticides", he added.

Mostafa Kamal said, "I am cultivating winter vegetables by clearing the weeds on the divider. We are very happy with the farming this way. However, with the advice of agriculture officials, the yield of vegetables may be better".

Meanwhile, many drivers stop their vehicles on the highway. Some travellers buy chemical- free vegetables from here.

Covered-van driver Saiful Islam Rony said, "The vegetables grown on the road divider are fresh and eye-catching. I often buy vegetables from here as those have been produced without using pesticides”.

According to sources, vegetables are being cultivated in an area of about six kilometres in different places of the highway, including Gangra and Miarbazar.

Chauddagram Upazila Agriculture Officer Nasir Uddin said, "It is a good news that vegetables are cultivated on the highway divider. We have already asked our field workers to make a list of the farmers. I will give them seeds free of cost and arrange training for them".