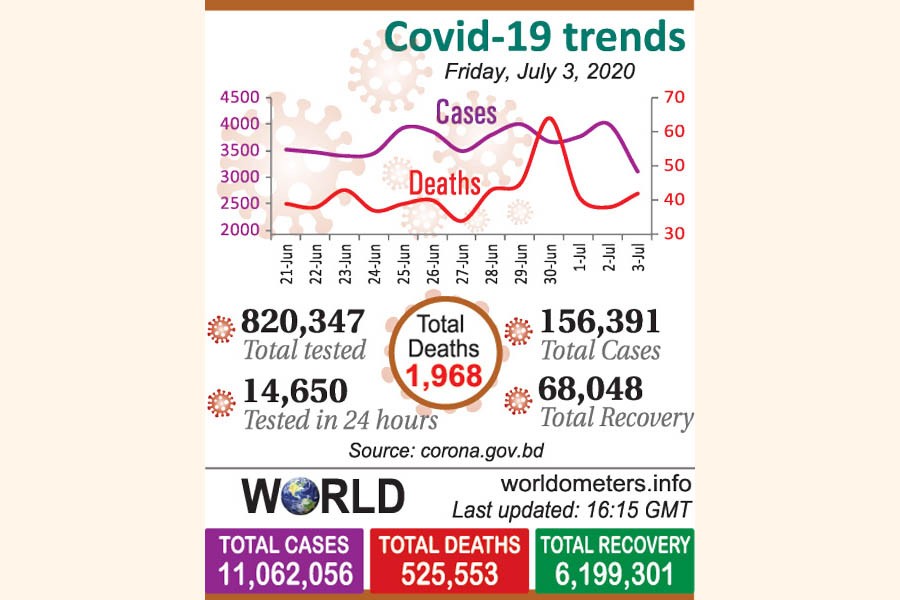 Bangladesh has now become the eighth worst-hit nation in accordance with the World Health Organisation's global weekly increase in Covid-19.

In the last seven days until 7:15 pm on July 03, 2020, the small, but densely-populated country ranked eighth in the world, reporting 26,671 confirmed cases.

In Asia, Bangladesh is the third worst-affected country, after India and Kingdom of Saudi Arabia, the WHO Dashboard showed in its pandemic situation in countries, territories and areas.

Even, Pakistan having much higher number of corona cases was positioned after Bangladesh in the latest weekly increase, recording 26,151 new cases.

In the last 24 hours, Bangladesh reported 3,114 new coronavirus cases along with 42 deaths.

According to state-run Directorate General of Health Services or DGHS, the rapid spread of the deadly Covid-19 virus has pushed up the infection rate, which reached 20 per cent while the death rate is 1.30 per cent.

With the tests, a total of 817,347 samples have so far been tested across the country.

Of the tests, some 3,114 samples were found Covid-19 positive along with 42 more deaths recorded across the country during the period, she said.

With these numbers, the overall tally of confirmed cases and deaths rose to 156,391 and 1,968 respectively, she said.

Eighteen of the latest deaths were recorded in Dhaka division, followed by 10 in Chattogram, four in Rangpur, three each in Khulna, Rajshahi and Sylhet while another in Barishal divisions, Dr Sultana said.

Twenty-one victims died at the hospital and eleven others at home, she said.

The DGHS officials said 63,556 people now remain in both home and institutional quarantine while 15,947 others in isolation.

Simultaneously, some 1,606 people recovered from the respiratory disease, bringing the overall number of recovery to 68,048, according to the officials.

Globally, over 11.0 million people were infected with the dedly pathogen and 524,879 died until Friday 8:00 pm, according to Worldometer data.