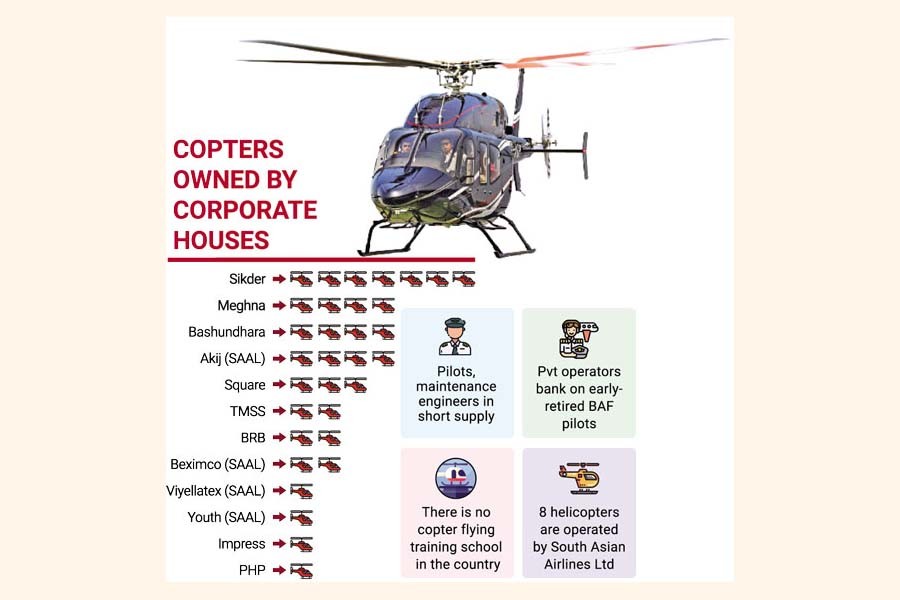 Flying helicopters in corporate sector has seen an impressive rise in a decade with the number of privately-owned copters rising to 32 by 2020 though potential of other sectors remained untapped.

Sources say the number of copters rose fast from just 7 in 2010, until the pandemic and consequent travel bans stood in the way.

In total, 42 helicopters were purchased by Bangladeshi companies but 10 of them were abandoned.

After 2020-the year of corona onslaught--no helicopter was purchased by the corporate sector mainly due to the pandemic and ongoing recession.

Interestingly, copters, which are seen hired by many affluent people, are mainly used in the corporate pool.

And these are offered for rent when they sit idle, meaning that the country actually does not have any dedicated and scheduled helicopter services for the public as yet, officials concerned said.

Though Best Aviation introduced private helicopter service in the country by taking lease of a BK-117 helicopter, it failed to continue operation.

The first of the 42 helicopters, purchased by a Bangladeshi company, was an AS 350B helicopter. Nitol Group procured it in 2000 but stopped operation later.

South Asian Aviation is now operating the largest fleet comprising 8 copters but all these are basically owned by other corporates.

Four of these eight are owned by Akij Group, two by Beximco, and one each by Viyellatex and Youth Group.

Sikder Group formed R&R Aviation, which has the second- largest fleet of 7 helicopters.

Bashundhara and Meghna groups have four helicopters each and Square owns three.

BRB Group, which originated from Kushtia, has two helicopters and TMSS Group based in Bogura also has two.

PHP Group and Impress Group both have one helicopter each.

But experts say in Bangladesh the scope of viability of scheduled commercial helicopter services is slim due to high operational cost.

"As the highest passenger capacity of a helicopter in our country is six, each passenger needs to pay Tk 25,000, which is much higher than an airline flight's," he says.

According to Mr Gulger, scheduled flight can be viable if there be frequent trips on that route.

For example, he says, helicopter services from Dhaka to an industrial hub like Dhaka-Gazipur can be a prospective route.

Mr Gulger also notes that in the tourist sector of Bangladesh helicopter services can be viable as people may prefer to visit destinations like Sajek in Khagrachari hill district to save time and to skip the trouble of long road journey.

In neighbouring India, helicopter services are being run profitably for pilgrims, who are visiting religious sites in remote mountain areas.

Presently, a Robinson 66 helicopter costs around 130 million US dollars and Bell 50 51.8 million dollars.

So taking the initiative to introduce scheduled services by investing such a huge amount of money is an uphill task.

Bangladesh has also limitations in human resources in terms of pilots and engineers.

Currently, the country has only 42 pilots and 18 Aircraft Maintenance Engineers.

The numbers of pilots and AMEs are not sufficient but the problem is Bangladesh does not have any helicopter flying school.

Such training is expensive and time-consuming so the companies have to depend on the pilots of Bangladesh Air Force who retire before completing full tenure.

Recently, the number of such early retirees has also become lesser than before, Mr Gulger says.

Meanwhile, these corporate helicopters are being frequently hired by elites for various purposes.

During the recent covid spells, these helicopters were used for emergency transfer of critical patients.

Impress Group has a helicopter which is specially equipped to carry patients.

These prices are not inclusive of the 15-percent VAT.

However, insiders say the regulation on taking permission 24 hours before flight causes inconvenience to both passengers and the companies.

People prefer to hire helicopter for emergency use but such restrictions are highly discouraging them, officials of the aviation companies felt.