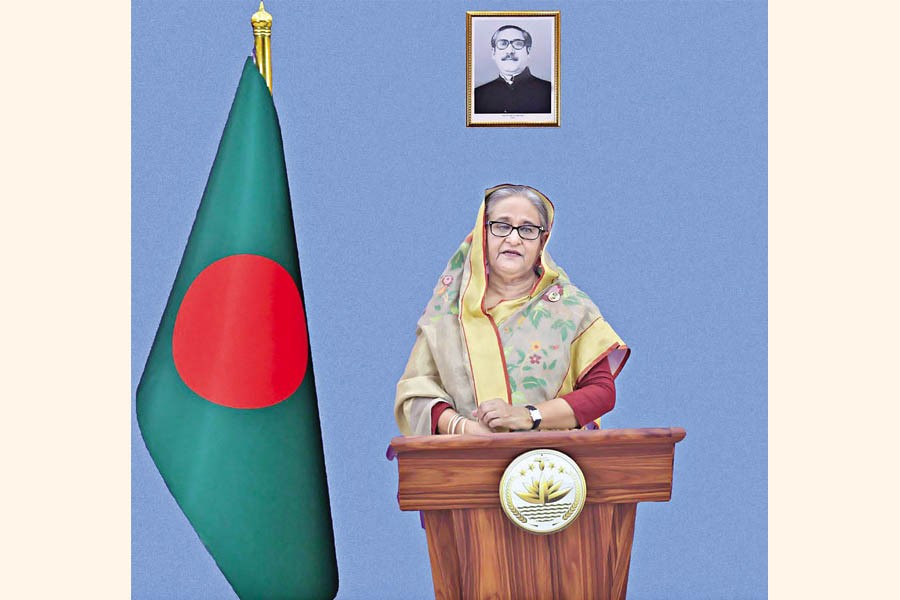 NEW YORK, Sept 23 (UNB): Prime Minister Sheikh Hasina has urged the global community to turn their "words and rhetoric" over the Rohingya crisis into actions to reach a desired solution to the protracted problem.

"We need to go beyond words and rhetoric to have tangible actions to reach a desired outcome which is also the cherished desire of the Rohingyas. Bangladesh will continue to work with all until this solution comes," she said.

The Prime Minister said this while speaking at a High-Level Side Event on "Forcibly Displaced Myanmar Nationals (Rohingya) crisis: Imperatives for a Sustainable Solution" here on Wednesday.

Bangladesh arranged the event, while eight other countries, including the UK, Ireland, Turkey and Saudi Arabia cosponsored it.

A total of 23 speakers from cross-regional countries spoke at the event moderated by Permanent Representative of Bangladesh to the United Nations Rabab Fatima.

All the speakers extended their solidarity with Bangladesh over the solution to the Rohingya crisis, Rabab Fatima, Permanent Representative of Bangladesh to the United Nations, said at a press briefing after the event.

Hasina mentioned that she repeatedly said that these displaced people are Myanmar nationals and they must go back to their homeland, Myanmar, in safety and dignity.

"We all, especially the international community, must do everything possible to make this happen."

She reiterated her call to Bangladesh's international friends and development partners to support its efforts in this regard.

"The Rohingyas themselves also wish to return to their home. "Resolving this humanitarian crisis is a collective responsibility as its implication goes beyond borders. Delaying this crucial problem jeopardizes our collective security."

She mentioned that the growing frustration over the lack of progress in repatriation entices many to get involved in criminal activities, and they are easy prey to extremist ideologies.

"This could potentially destabilize the entire region. Therefore, we must act now and with real urgency."

The proposals are: Ensuring sustainable repatriation, finding a solution to the current crisis in Myanmar, playing a role ASEAN, Taking a tangible actions and projects by the UN in Myanmar to create an environment conducive to repatriation and ensuring accountability for the persecution committed against the Rohingyas.

"I'm encouraged to see the strong presence of our key partners today. I believe you all share our concerns and need urgent action to resolve this serious problem," Hasina said.

For the last four years, the Prime Minister said, "We held high hopes that these displaced people could go back to their own homes in their motherland Myanmar in safety, security and dignity. We reposed our trust in the global assembly and community for their repatriation. But Bangladesh's calls have gone unheeded and its hopes unfulfilled.

"We're now in the fifth year of the crisis. Yet, we still hold the hope for a durable solution to this crisis," she added.

She said when the crisis broke out in 2017 with the mass exodus of a million forcibly displaced people from the Rakhine Province of Myanmar to Bangladesh, the choice was to save their lives or to close the border and let them face ethnic cleansing. "We chose to save their lives for the sake of humanity."

Since that mass exodus in 2017, at all the successive UNGAs, Hasina said has been placing specific proposals for a sustainable solution to the crisis.

Hasina said the government has maintained bilateral engagements with Myanmar. At the regional front, it has tried to take on board the major powers, including China and India.

She said Bangladesh has all along tried to have more active involvement of ASEAN. At the multilateral front, it has kept the issue on the table by UN resolutions engaging important countries and the UN agencies.

"Sadly, our efforts for the hapless, uprooted Myanmar nationals returning home to Myanmar has not generated any tangible outcome yet. Till today, not a single one of them could go back to their homeland," she bemoaned.

The Prime Minister said the government has ensured all necessary arrangements to make their temporary stay in Bangladesh safe and secure, despite its resource and land constraints.

"The prolonged stay of such a large population in a congested area is also having serious impacts on the surrounding environment and ecology. Hills and forest lands have been cut down to provide shelters."

Even in the face of the Covid-19 pandemic challenges, she said, "We haven't forgotten to ensure the safety and welfare of the Rohingyas. We've remained faithful to our conviction that no one is safe until each one of us is safe. We've included this population in our national vaccination programme."

About the relocation of Rohingyas to Bhasan Char, Hasina said the island has proper infrastructure and, in fact, has better amenities to temporarily relocate about 100,000 of the camp population.

"So far, we've relocated around 18,500 of these people displaced from the camps in Cox's Bazar to Bhashan Char. The relocation is being done on the principle of voluntariness. We expect to see the start of the UN's operation in Bhashan Char soon," Hasina added.

She made it clear that whatever Bangladesh is doing is purely on a temporary basis.

The speakers highly commended the bold leadership of Prime Minister Sheikh Hasina and said they would continue their support to Bangladesh over the issue.

Foreign Minister Dr AK Abdul Momen, at the press briefing, said all the speakers agreed for an urgent solution to the Rohingya crisis, saying that the solution lies with their repatriation to Myanmar.