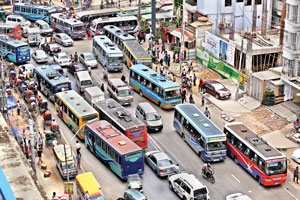 Dozens of passenger buses plying newly opened routes clog the entry point of Kalshi Road in the city during the peak hours on Saturday. — FE Photo

The authorities concerned are allowing new bus routes in Dhaka city overlooking the recommendations made by recent studies carried out by the Dhaka Traffic Coordination Authority (DTCA).

But the opposite has happened, sources said. The Regional Transport Committee (RTC) allowed the opening of 58 new bus routes since then, making the Dhaka city's traffic situation even more chaotic.

Political influence and graft often have a bearing on the decision taken in favour of opening new bus routes, sources mentioned.

The city roads now get clogged with hundreds of buses and minibuses due to irrational granting of route permits without having knowledge about proper traffic management, experts said.

They find the lack of knowledge about trip generation and road capacity on the part of the authorities concerned.

For such ignorance about the road rules, transport experts said, problems like overlapping and repetition of bus services led to the worsening of traffic jam in Dhaka metropolis and its adjacent areas.

In such a chaotic traffic situation, they observed, the authorities failed to minimise the need for public transport of any area, leaving commuters in a quandary.

According to data available with Bangladesh Road Transport Authority (BRTA), around 6,000 buses and minibuses run on a total of 209 routes across the capital city, as of this month of June.

Regional Transport Committee (RTC), formed under the BRTA Ordinance in 1999 with Dhaka Metropolitan Police Commission as its head, permits the routes based on a maximum ceiling on bus plying each route. As per the ceiling, the RTC data show, the city has still the capacity for 3,000 more buses.

The situation on the ground is, however, different. Commuters find innumerable vehicles run on the streets, some with valid permits and some are not.

It is found that nearly 50 per cent members of the Metropolitan RTC are from the group of owners and workers' associations of different modes of transport -- bus, truck, covered van, auto-rickshaw. There is hardly any technical expert on the committee.

The Financial Express, analysing the latest BRTA data, also found that one-third of 209 routes are concentrated in and around Mirpur area -- half of those, however, start from Pallabi and nearby areas.

Some 74 operators are found plying passenger buses from Mirpur areas towards different destinations, overlapping and crisscrossing areas like Mirpur 10, Farmgate, Shapla Chattar, Shahbagh, Airport, Mohakhali, and Ittefaq crossing. The number of buses moving around the areas would be no less than 2,000.

About a dozen Mirpur-centric routes end up in busy business district of Motijheel showing last stoppages as Shapla chatter, Bangladesh Bank and even Notore Dame College.

At the same time, buses on 40 routes cross Shapla Chatter for different destinations like Sayedabad, Kamlapur, Airport, Mohammadpur, Abdullahpur and so.

The overlapping of bus routes is also noticeable on around 30 kilometre-long north-south corridor namely Gazipur-Mohakhali where buses of 60 routes run from Tongi, Abdullahpur, Uttara, Kuril and Khilkhet direction at a time.

This medley of transports makes the city's important gateway overcrowded -- and its jamming impact spills over the entire city thoroughfares.

Sources said although the government has several studies to help the RTC introduce better bus routing, none of those is considered by its members for reasons best known to them.

"They (RTC Dhaka) do typical optical and mental survey on a route after receiving application from an operator and hold discussion among members before providing the route permit," said a former BRTA official, once involved with the process.

"There is no scope for sharing information about the studies done under the DTCA on bus-route rationalisation, trip generation or road capacity through latest traffic study," he told the FE.

He made the disclosure when asked why not the studies were shared with the committee.

But member-secretary of BRTA Masud Alam said survey on a route applied for is done by deputy commissioner of DMP and others concerned like sergeants as they have better idea of the need of buses of their respective areas.

He, however, said considering low road capacity, the RTC has now stopped giving permit of plying minibuses and old buses on new routes during the last two years.

Khandaker Enayet Ullah, secretary-general of Bangladesh Road Transport Owners Association and an influential RTC member, showed his ignorance about the studies and data on transportation.

But he said the DTCA studies were done under the World Bank funding to introduce special kind of buses as BRT (Bus Rapid Transit).

Study-team members said such modifications would be possible only by eliminating repetition of routes.

This restructuring of bus service was necessary to accommodate the existing bus services with mass-transit system -- BRT and MRT, the two most important components to ease traffic gridlock on a long-term basis.

The WB-funded study found that length of the bus routes vary from 0.5 kilometres to 66 kms. Sixty-five per cent of those have length between 10kms and 15 kms but only five out of 152 routes run in east-west direction.

Amid the scenario, the BRTA data show that 40 new routes were added during the last two years -- half of these again from oversaturated Mirpur area.

Transport-expert Shamsul Hoque said in the absence of a good business model, thousands of buses and inefficient routes are creating more problems than easing those.

"A good business model can ensure reduction of overlapping of bus services through increasing coverage and optimizing route length and vehicle capacity by assessing all necessary factors," he said.

A BUET professor, Dr Hoque, however, laid importance on immediate formation of BusNet as recommended in the Strategic Transport Plan and the WB study to curb "anarchy on the streets".

"To do so, the government has to ensure that transport is sector free from political influence. Without this all efforts will go in vain," he said.

However, when asked about restructuring the RTC or the government's plan to form BusNet, Road Transport and Highways Division secretary MAN Siddique said many foreign studies could not be followed as foreign experts' recommendations remains far from the country's reality.

Route permit, he said, is the task of DMP and they do it by involving all stakeholders.

The secretary denied his ministry's role in this regard.

But it is the government which enacted the DTCA Act of which section 9 states clearly the role of the DTCA in road-transport coordination including route planning for public and mass transport in Dhaka and its adjacent districts.