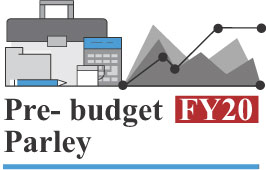 The views came Thursday at a discussion on the national budget for fiscal year 2019-20, arranged by the Institute of Chartered Accountants of Bangladesh (ICAB) and Prothom Alo in Dhaka.

In her speech, Center for Policy Dialogue (CPD) executive director Dr Fahmida Khatun said the number of unemployed youths is now increasing fast due to the lack of private investment.

"At 10.6 per cent, higher unemployment rate among youth population against the national level of 4.0 per cent is worrying for the country," she said.

Responding to the proposal, the NBR chairman said the introduction of the inheritance tax can be considered a good proposal.

Gini coefficient is an economic term to gauge income or wealth inequality on a scale of 0 to 1, in which 1 represents perfect inequality and 0 signifies perfect equality.

He said Gini coefficient for income inequality was 0.48 in 2018.

"Excessive corruption, inflation, irregularities in banking system, higher indirect taxes are responsible for this increasing level of inequality," he said.

Former chairman of Bangladesh Securities and Exchange Commission Faruq Ahmad Siddiqi said inequality is increasing in the country due to poor base of direct taxes.

"Currently there is a 10 per cent tax gap between non-listed and listed companies, but this incentive has failed to encourage companies to be listed in the capital market," he said.

He said there is no impact of the monetary and fiscal policy on the capital market as investors hardly get its benefit.

ICAB president AF Nesaruddin said only 1.25 per cent of the total population pays tax, which should be raised to help the country achieve a middle-income country status.

ICAB vice-president and chairman of Bangladesh House Building Finance Corporation Md Salim Uddin said that the rate of employment generation and poverty reduction was slower than that of economic growth.