The net inflow of foreign direct investment (FDI) in Bangladesh stood at $3.61 billion on a final count, according to the latest statistics of the central bank.

The Bangladesh Bank data put gross inflow of foreign investment at $4.54 billion in the 2018 calendar year. 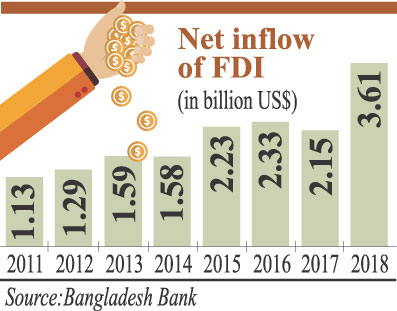 Disinvestment, loan repayments and loses have been deducted as per the International Monetary Fund (IMF) guideline from gross FDI to determine net FDI.

The statistics further showed that more than one-third of net FDI in 2018 was sourced by reinvesting earnings of existing multinational entities in Bangladesh.

Abul Kasem Khan, former president of the Dhaka Chamber of Commerce and Industry, was quick to welcome this rise in FDI inflow.

"It's welcoming and I'm happy that FDI is rising," he said while talking to the FE over telephone.

"But the amount is still very low in terms of the country's economic requirements, job creation and technology transfer," added Mr Khan.

He said the ration of FDI to GDP (gross domestic product) here is still below 2.0 per cent when it should be 4-5 per cent to boost long-term growth.

"FDI inflow in Vietnam is around $15 billion, but we're still to attract FDI worth $5 billion," the business leader observed.

As FDI is a reflection of confidence in economic growth, the director of AK Khan and Company Ltd thinks it is time to improve business environment here.

The statistics posted on the central bank's website, however, did not disclose the full-year data on county-wise FDI inflow to Bangladesh.

It only provided the last quarterly (October-December 2018) data on the country-wise FDI inflow.

According to an FE estimate using previous and current data, China became the top source of FDI in Bangladesh and the value stood at $1.03 billion in 2018.

Again, the central bank statistics did not provide any detailed information on sector-wise FDI here during the period under review.

The figures only showed sector-wise FDI for the last quarter of the past year and year-end stock.

Incomplete and scattered data on FDI makes it difficult to get a big picture of the FDI status in the country.

The banking regulator is likely to release the half-yearly FDI survey data within days to give the detailed FDI status in the July-December period of 2018.