The healthcare authorities said on Saturday they planned a regulated expansion of the kiosk or "wisk" approach for Covid-19 testing, engaging non-government or private organisations as the situation demands an intensified campaign to detect infections, reports BSS. 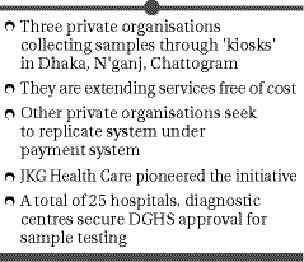 BRAC and Digital Healthcare Solution are two other NGOs to extend services in collecting samples.

She said the three organisations were currently extending the service free of cost but several other private organisations now applied to DGHS seeking to replicate the system under payment system.

"We are reviewing their proposals as we plan to expand the testing facilities engaging the non-government or private sector," Sultana said.

The first two sample collection booths or wisks were set up in Narayanganj on April 08.

The 'wisks' are sanitised glass cabins from where medical technologists or healthcare professionals with protective gears collect throat swabs of people who stand or sit outside while one health worker with extra protection requires to remain outside during sample collections.

"The booth model is safe for health workers and the people want to be tested as well . . . it became popular as the people are getting the service almost at their doorsteps," Sultana said.

Sultana said a total of 25 private hospitals and diagnostic centres by now secured DGHS approval for sample testing against the backdrop of crucial needs for widening Covid-19 testing facilities.

"We are collecting 300 to 400 samples in these booths everyday as a large of number of people with Covid-19 symptoms queue up daily," she said adding until now none of their 'wisk' workers were infected due to adequate precautionary measures.

Medical technologist inside the cabin use special gloves while collecting samples and after collection of each sample the gloves and the chair used by the person to be tasted is disinfected.

"We will set up 100 walk-in kiosks in Covid-19 vulnerable regions in the country to supplement government efforts expedite and scale up testing capacity," Morsheda said.

She said their organisation earmarked 19 Covid-19 hotspots across the county to install the booths but half of the kiosks would be in the capital alone.

Morsheda said currently BRAC was running the wisks with own finance but simultaneously sought donors support as it planned to expand the facility to serve larger number of Covid-19 suspects.

"In a densely populated country like Bangladesh, kiosks are crucial to test the suspects with lesser risks of spread of the contamination," she said.