The role of press during Liberation War

The newspapers of the then East Pakistan were quite vocal in favour of emancipation of the Bangalis during the non-cooperation movement launched by the Awami League in March 1971 against the Pakistani military junta. In accordance with the directives issued by the undisputed leader of the movement Bangabandhu Sheikh Mujibur Rahman through his historic speech of 7 March 1971, the newspapers of the province of East Pakistan including those run by the Pakistan Press Trust started to toe the line of Bangabandhu and his party. Consequently, after the launching of a genocide by the Pakistani military in East Bengal on the night of 25 March 1971, and subsequent declaration of Bangladesh’s independence by Bangabandhu along with commencement of the Liberation War the next day, the offices and printing presses of three leading dailies of Dhaka were destroyed by the mortar attacks of the Pakistani Army within a space of one week. These were ‘Dainik Ittefaq’, ‘Sangbad’, and ‘The People’. The offices of ‘Dainik Pakistan’, ‘Dainik Purbodesh’, ‘Morning News’, and ‘Pakistan Observer’ were also attacked and a portion of Dhaka Press Club was destroyed. Periodicals like the weeklies ‘Swaraj’ and ‘Banglar Bani’—which were quite vocal in the resistance movement—had to be closed down. 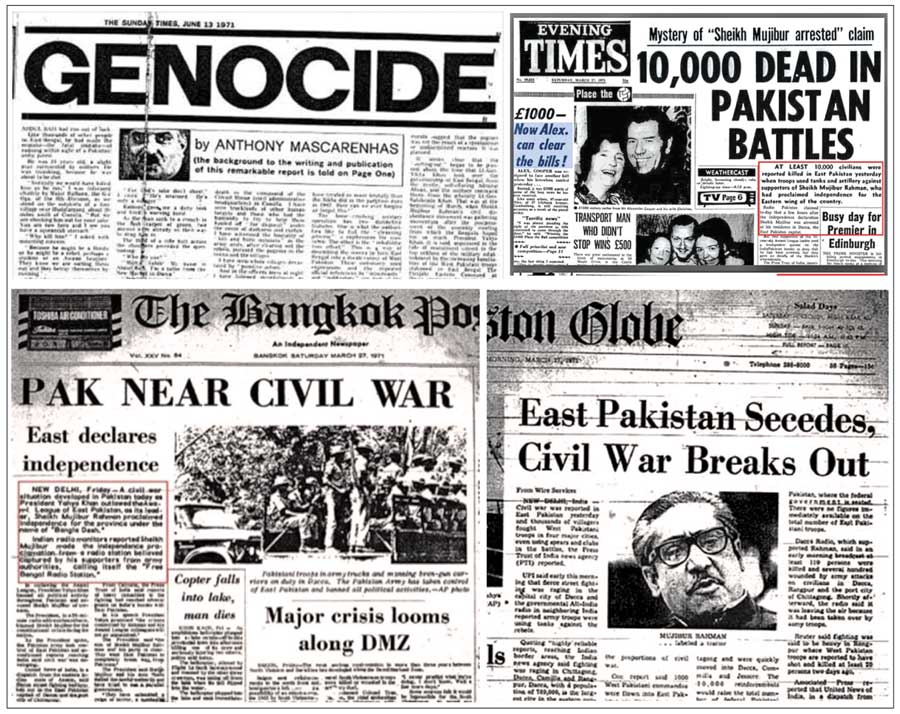 The journalist community of the country took great risk during the non-cooperation movement when they gave prominent coverage to the movement in dailies like Ittefaq, Purbodesh, Sangbad, Azad, Morning News and Pakistan Observer. It was a clear demonstration of their patriotism and their unflinching faith in Bangali nationalism. Sensing the conspiracy of the Pakistani junta, the East Pakistan Journalists Union sat in a meeting on 23 March 1971 and extended open support to the emergence of Bangladesh through confronting the military threat of Pakistan. They also expressed their intention of not providing press coverage to the activities of the military junta.

The daily ‘The People’ brought out from Shahbagh, Dhaka was most vocal against the military rulers during the non-cooperation movement. It then carried banner headlines on a daily basis targeting and criticising the Pakistani military. And consequently, not many were surprised when ‘The People’ was razed to the ground on the very night of 25 March through indiscriminate mortar shells and bomb attacks by the Pakistani forces. The next day, it was the turn of Daily Ittefaq—which was traditionally linked to the democratic struggles of the Bangalis since its very birth. And then, two days later, the torch-bearer of the country’s culture, literature, progressive politics and, above all, mass movements—the daily Sangbad was burnt to ashes. The renowned journalist and progressive litterateur Shahid Saber was also killed during the incident.

Press in occupied Bangladesh: After the crackdown of 25 March, no newspapers came out for three to four days. And then, as dictated by the Pakistani military junta, the major dailies of Dhaka had to be brought out. The intention of the military junta was to give an impression of normalcy to the outside world. But that effort was not very successful due to the makeshift nature of the published materials. Some were published with even one or two pages. The Bangali journalists played a subtle and discrete role in this whole affair. To control the media, the Pakistani military then issued strict martial law regulations aimed at gagging the press.

Press in free areas: As the barbaric genocide by the Pakistani occupation army continued, most of the newspapers and periodicals in the country stopped their publication. Many journalists crossed over to India and started bringing out new periodicals. The periodicals which were then published from Mujibnagar—the seat of the government-in-exile— and various towns of India presented news on the war-front and the resistance that was taking place in occupied Bangladesh. Most of these publications were brought out without formal declarations, and many did not have their own establishments.

Weekly ‘Joy Bangla’ was previously published from a rural town of East Bengal. But when it was brought out from Calcutta during the Liberation War with Awami League leader Abdul Mannan (pen name Ahmed Rafique, in-charge of information and broadcasting in the Mujibnagar government) as the chief editor, it assumed the character of an official publication of the Awami League as well as the government-in-exile.  Zillur Rahman (MNA) was the executive editor of this weekly and the board of editors included Abdul Gaffar Chowdhury, Ebne Golam Samad, Mohammad Ullah Chowdhury, Abdur Razzaque Chowdhury, Anu Islam, Salimullah, Asad Chowdhury and Abul Manzoor.

Among the other periodicals, Grenade was copied from Cyclostyle machine and some young student activists used to bring it out from a house in Dhaka city by using a machine brought from Notre-dame College. This young band of guerrillas, called ‘Bichchhu’, created a ripple through their pen alongside waging an armed guerrilla war.

Bangladesh was the English language weekly brought out by the Government of Bangladesh from Mujibnagar. It was first published in June 1971 and it succeeded in making an impact on the outside world through regular overseas publicity.

Apart from Joy Bangla, the periodicals which were brought out by various political parties included Muktijuddha by Bangladesh Communist Party and Notun Bangla by National Awami Party (Mozaffar).

The periodicals that were published during the War of Liberation from different corners of Bangladesh and neighbouring India, mostly on a local and regional basis, for realizing the goal of independence, served as beacons of hope for the freedom-aspiring people. Innumerable weeklies and fortnightlies were then published solely for upholding the cause of the freedom struggle. They highlighted the spirit of the liberation war and the aspirations of the people. They also depicted the barbarism of the Pakistani military and were useful in extending moral support and motivation to the populace while they were facing the enemy.

Role of the Foreign Press: Immediately after the start of the military crackdown by the Pakistanis on the night of 25 March 1971, the foreign correspondents stationed in Dhaka were gathered at Hotel Intercontinental and then expelled from the country. It was only when they reached their respective countries that the whole world came to know what was happening in Bangladesh. Prominent among them were the New York Times correspondent Sydney Schanberg, Simon Dring of Daily Telegraph, Cyril John, Michele Roberts and Louis Heren of the London Times. The latter two tried to stay back secretly, but were arrested. However, the Pakistani authorities were later forced to release them.

The British-born journalist Neville Anthony Mascarenhas used to work in Pakistan. But observing this brutality in East Bengal, he went back to London and published a long report on the ‘genocide’ in the Sunday Times, which helped in arousing the global conscience. Simon Dring sent detailed reports via Bangkok as it was not possible for him to do so from Dhaka. Other prominent westerners engaged in covering the war in Bangladesh included Colin Smith and Nicholas Tomalin. When their reports were publicised worldwide, the whole world came to know about the indiscriminate killings, lootings, plunder and rape that were being perpetrated in Bangladesh.

The news media in India, England, France, Australia and the United States played the most prominent role in publicising the liberation war of Bangladesh. Outstanding among the Indian newspapers in this field were Jugantar, Amritabazar Patrika, Anandabazar Patrika and The Statesman of Calcutta (now Kolkata), Times of India, Pioneer and Hindustan Times of Delhi, and The Hindu from Madras (now Chennai). And prominent among the western periodicals were Observer, Guardian, Telegraph, Sunday Times and the Economist of the UK, and Washington Post, New York Times, Time magazine and Newsweek of the USA. The names of two Indian journalists should be mentioned here as they went missing while gathering news on the war-front. They were Surajit Ghoshal and Deepak Banerjee of Anandabazar and Amritabazar Patrika respectively.