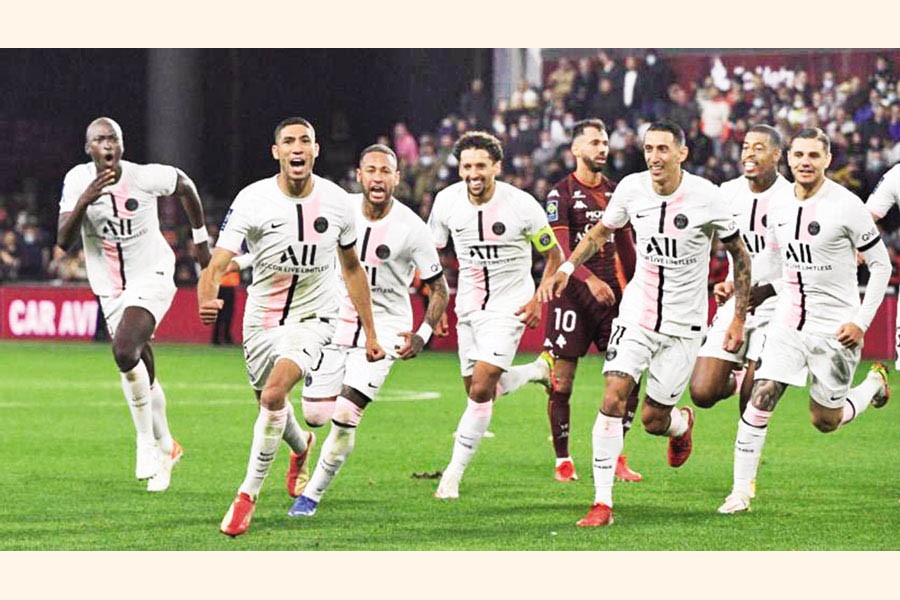 PARIS, Sept 23 (AFP): Achraf Hakimi's dramatic injury-time winner rescued Paris Saint-Germain a 2-1 victory at bottom club Metz on Wednesday as the capital giants maintained their 100 percent start to the Ligue 1 season despite the absence of the injured Lionel Messi.

But a chaotic climax to the match saw Metz reduced to 10 men and have their coach Frederic Antonetti sent to the stands before Hakimi's 94th-minute strike.

"The team fight to the end and never admit defeat, they have this ability to surpass themselves, with character, and the reward came at the end," said PSG boss Mauricio Pochettino.

PSG went into the new season as red-hot favourites to regain their French title after a raft of close-season signings, including six-time Ballon d'Or winner Messi.

The former Barcelona icon was absent with a knee injury and Pochettino's men struggled against winless Metz.

But PSG extended their early advantage at the top of the table to seven points over rivals Marseille -- who drew 0-0 at third-placed Angers - after a seventh victory from as many league games.

Hakimi pounced early on but PSG were far from their best and Kouyate headed home from a corner six minutes before the break.

Visiting goalkeeper Keylor Navas had to make a good save to deny Lamine Gueye a goal on the stroke of half-time, while Metz appeals for a penalty for handball against Hakimi early in the second period were turned down.

The real drama came after the clock had ticked past the 90 minutes, though, as Metz defender Dylan Bronn was shown a second yellow card for kicking the ball away.