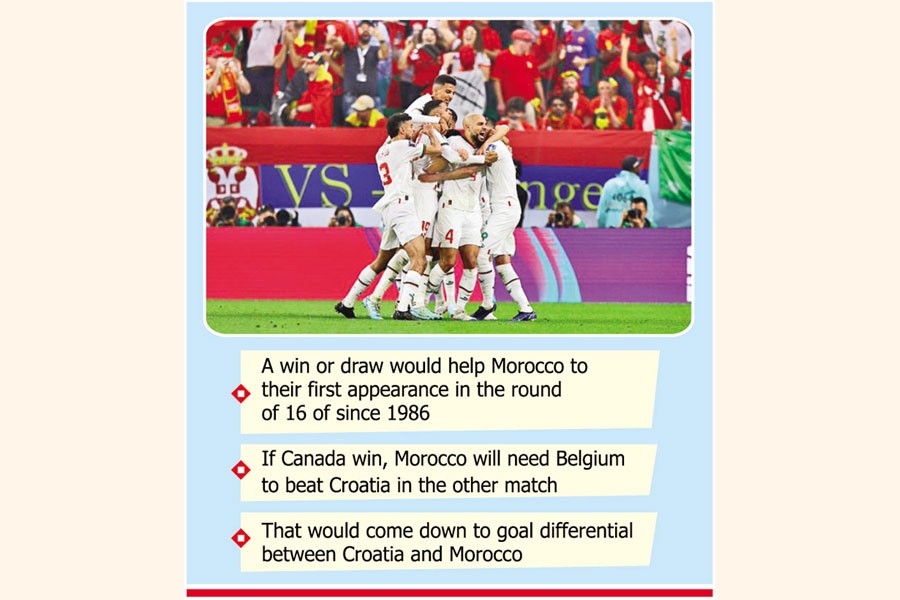 AL RAYYAN, Qatar, Nov 30 (Agencies) : An invigorated Moroccan team will be seeking to reach the knockout stage of the World Cup for the first time in nearly four decades by defeating or drawing with Canada in their final Group F match on Thursday.

Morocco recorded their first World Cup win since 1998 by defeating second-ranked Belgium 2-0 on Sunday, sparking euphoria among players, wild celebrations among fans - and even riots in Brussels.

In their final group stage test, the Moroccans will play Canada, who will be looking to bag their first win in the tournament's history after being eliminated from their first World Cup in 36 years.

A win or draw would help Morocco to their first appearance in the round of 16 of since 1986. If Canada prevail, Morocco will need Belgium to beat Croatia in the other Group F match, with the goal difference determining if they or the 2018 runners-up advance.

"If we get through to the knockout stage, I think we will be very dangerous going forward," Moroccan manager Walid Regragui said ahead of their win against Belgium.

Morocco unexpectedly changed goalkeepers at the last moment before kickoff against Belgium as Munir El Kajoui came on to replace Yassine Bounou. A team doctor later said that Bounou had felt dizzy but would be fit to play against Canada.

Canada were knocked out after losing their two opening fixtures against Belgium and Croatia but managed to score their first ever World Cup goal - just 68 seconds after kick off - against the Croatians.

With nothing left at stake in the tournament, Canada will try to build on the strong performance they showed against Belgium and focus on leaving Qatar in good form as they prepare to co-host the World Cup with the United States and Mexico in 2026.

With the World Cup expanding from 32 nations to 48 from 2026, Canada can hope to take part more often in future tournaments after their automatic qualification as co-hosts in four years' time.

Canada is 0-5 in World Cup play, failing to score in its only other appearance in 1986. After outplaying Belgium for most of their opener this year, but losing 1-0, they took an early lead against Croatia but lost 4-1.

Alphonso Davies scored Canada’s first World Cup goal, putting it ahead 68 seconds in with the fastest goal of this year’s tournament.

“There’s a lot for us to play for,” Canada coach John Herdman said. “We came here to make history. The first game, they said they wanted to show fearless(ness) and entertain. They did that. The second game, they said they wanted to score goals, and if those goals were enough to win a match, then that would have been us with three points, but it wasn’t. So this last game is about getting a result and winning for Canada and really making this country believe we’re in the right direction for 2026.”

Canada will co-host the next World Cup with the US and Mexico.

Canadian midfielder Stephen Eustáquio left at halftime against Croatia because of a hamstring injury.